John Wycliff and the Lollards

Cult C Calendar G B. From the Archives: In the Year of Death, Wycliffe Wrote to Pope Urban VI. Who were the post-Wycliffe Lollards, what did they practice and what became of their movement? - Cameron Freeman. Critical to religious reformation, I will argue that the post-Wycliffe Lollards suffered from a lack of intellectual leadership, as well as ecclesiastical and secular persecution which forced the movement into secrecy, pushing Lollardy to the fringes of religious society and effectively neutering its ability to facilitate Church reform-dooming them to extinction as a distinct religious sect. 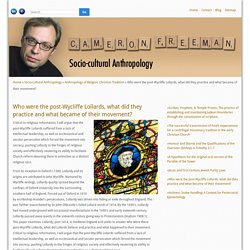 From its inception in Oxford c.1380, Lollardy and its origins are attributed to John Wycliffe. Nurtured by Wycliffe writings, Lollardy quickly spread beyond the confines of Oxford University into the surrounding southern half of England. Forced out of Oxford in 1410 by archbishop Arundel's persecutions, Lollardy was driven into hiding or exile throughout England. This was further exacerbated by Sir John Oldcastle's failed Lollard revolt of 1414. By the 1430's, Lollardy had moved underground with occasional manifestations in the 1490's and early sixteenth century. John Wycliffe. The first hand-written English language Bible manuscripts were produced in 1380's AD by John Wycliffe, an Oxford professor, scholar, and theologian. 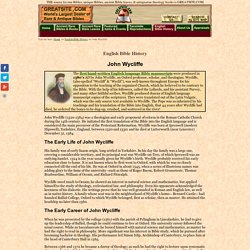 Wycliffe, (also spelled “Wycliff” & “Wyclif”), was well-known throughout Europe for his opposition to the teaching of the organized Church, which he believed to be contrary to the Bible. With the help of his followers, called the Lollards, and his assistant Purvey, and many other faithful scribes, Wycliffe produced dozens of English language manuscript copies of the scriptures. They were translated out of the Latin Vulgate, which was the only source text available to Wycliffe. Wycliffe Translating%20Bible%20into%20Vernacular. 1. From Wycliffe to King James (The Period of Challenge)

March 21, 2001 Preface: This is the third part of a four-part lecture that was delivered at Lancaster Bible College in March, 2001, for the Staley Bible Lectureship. 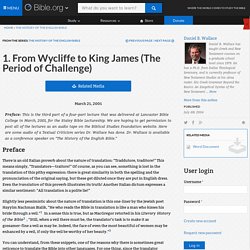 We are hoping to get permission to post all of the lectures as an audio tape on the Biblical Studies Foundation website. Here are some audio of a Textual Criticism series Dr. Wallace has done. Dr. Preface There is an old Italian proverb about the nature of translation: “Traddutore, traditore!” Slightly less pessimistic about the nature of translation is this one-liner by the Jewish poet Hayyim Nachman Bialik, “He who reads the Bible in translation is like a man who kisses his bride through a veil.”1 In a sense this is true, but as MacGregor retorted in his Literary History of the Bible2, “Still, when a veil there must be, the translator’s task is to make it as gossamer-fine a veil as may be. Religious people of all faiths struggle with these attitudes. 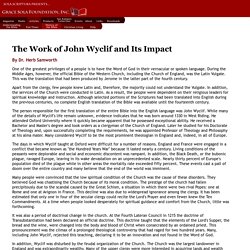 Herb Samworth. Britannia History: Lollardy. The History of Lollardy by Jeff Hobbs L O L L A R D Y in late 14th Century England Britannia's biography of John Wycliffe highlights some of his criticisms of the Church, and also tells how certain of his followers became known as Lollards. 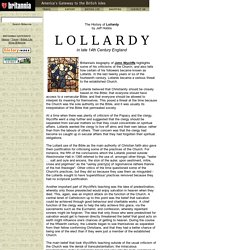 In the last twenty years or so of the fourteenth century, Lollards became a serious threat to the established Church. Lollards believed that Christianity should be closely based on the Bible; that everyone should have access to a vernacular Bible; and that everyone should be allowed to interpret its meaning for themselves. This posed a threat at the time because the Church was the sole authority on the Bible, and it was usually its interpretation of the Bible that permeated society. At a time when there was plenty of criticism of the Papacy and the clergy, Wycliffe went a step further and suggested that the clergy should be separated from secular matters so that they could concentrate on spiritual affairs. The Lollards - Lollardy in Medieval England. Lollardy has been called 'England's first heresy'. 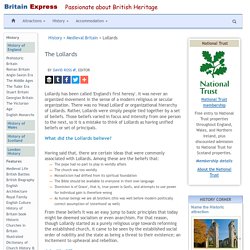 It was never an organized movement in the sense of a modern religious or secular organization. There was no 'Head Lollard' or organizational hierarchy of Lollards. Rather, Lollards were simply people tied together by a set of beliefs. Those beliefs varied in focus and intensity from one person to the next, so it is a mistake to think of Lollards as having unified beliefs or set of principals. What did the Lollards believe? Having said that, there are certain ideas that were commonly associated with Lollards. John%20Wycliffe. John Wycliffe. Christian History. Hus De Ecclesia.