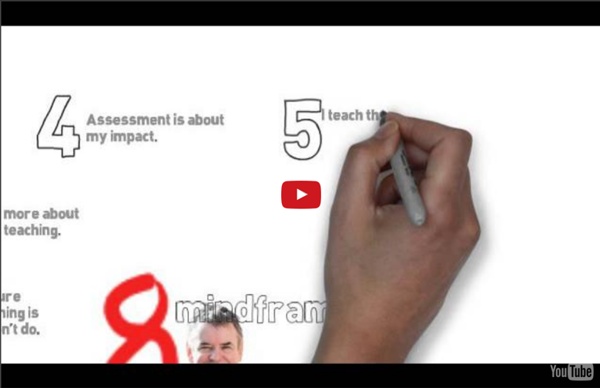 In Conversation with Professor John Hattie Few people have generated as much conversation and interest around what works in education as Professor John Hattie. As a proponent of evidence-based quantitative research methodologies on the influence of student achievement, John’s research work is internationally acclaimed. His passion for research and education led him to undertake the largest ever meta-analysis of the effect of different factors on educational outcomes, the result of which was his acclaimed 2007 book, ‘Visible Learning’. John recently contributed two papers to Pearson’s Open Ideas series, both of which have attracted much comment and attention from the education community.

John Hattie's Eight Mind Frames For Teachers “Hattie’s 8 Mind frames”. Video scribe project by Cheryl Reynolds. In Visible Learning for Teachers (p. 159 ff) John Hattie claims that “the major argument in this book underlying powerful impacts in our schools relates to how we think! It is a set of mind frames that underpin our every action and decision in a school; it is a belief that we are evaluators, change agents, adaptive learning experts, seekers of feedback about our impact, engaged in dialogue and challenge, and developers of trust with all, and that we see opportunity in error, and are keen to spread the message about the power, fun, and impact that we have on learning.”

Above & Beyond In an increasingly complex, demanding and competitive 21st century, students need to learn more than the 3R’s they are tested on in school. It’s time to help them go “above & beyond”, by embracing the 4Cs – communication, collaboration, critical thinking and creativity. To get the word out to about the “3Rs + 4Cs” approach, P21 and FableVision partnered to produce a short, animated film called Above & Beyond. Enjoy & share, so we can help ALL our students flourish in the 21st century. Many members of the Partnership for 21st Century Learning helped shape and refine this story – using their communication, collaboration, critical thinking and creativity skills. 50 people and hashtags you MUST check out on Twitter Twitter is an amazing hub of activity, exposing us to people, ideas, resources and tools. These 50 people and hashtags have made me a better educator. (Public domain image via Pixabay.com) Getting connected professionally on Twitter was the single most important, most powerful thing I ever did as an educator. The most important.

What works in education – Hattie’s list of the greatest effects and why it matters I have been a fan of John Hattie’s work ever since I encountered Visible Learning. Hattie has done the most exhaustive meta-analysis in education. Thanks to him, we can gauge not only the relative effectiveness of almost every educational intervention under the sun but we can compare these interventions on an absolute scale of effect size. Perhaps most importantly, Hattie was able to identify a ‘hinge point’ (as he calls it) from exhaustively comparing everything: the effect size of .40. Anything above such an effect size has more of an impact than just a typical year of academic experience and student growth.