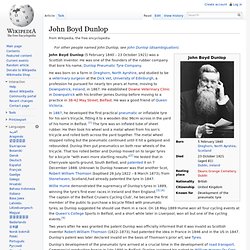 He was one of the founders of the rubber company that bore his name, Dunlop Pneumatic Tyre Company. He was born on a farm in Dreghorn, North Ayrshire, and studied to be a veterinary surgeon at the Dick Vet, University of Edinburgh, a profession he pursued for nearly ten years at home, moving to Downpatrick, Ireland, in 1867. He established Downe Veterinary Clinic in Downpatrick with his brother James Dunlop before moving to a practice in 38-42 May Street, Belfast. He was a good friend of Queen Victoria. In 1887, he developed the first practical pneumatic or inflatable tyre for his son's tricycle, fitting it to a wooden disc 96cm across in the yard of his home in Belfast. [1] The tyre was an inflated tube of sheet rubber. Dunlop's image appears today on the £10 note issued by the Northern Bank which is in circulation in Northern Ireland.[5] References[edit] External links[edit] John Boyd Dunlop Feature Page on Undiscovered Scotland. 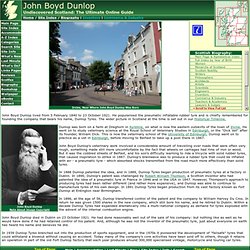 He popularised the pneumatic inflatable rubber tyre and is chiefly remembered for founding the company that bears his name, Dunlop Tyres. The wider picture in Scotland at the time is set out in our Historical Timeline. Dunlop was born on a farm at Dreghorn in Ayrshire, on what is now the eastern outskirts of the town of Irvine. He went on to study veterinary science at the Royal School of Veterinary Studies in Edinburgh, or the "Dick Vet" after its founder, William Dick. This is now the veterinary school of the University of Edinburgh. John Boyd Dunlop's veterinary work involved a considerable amount of travelling over roads that were often very rough, something made still more uncomfortable by the fact that wheels on carriages had rims of iron or wood. 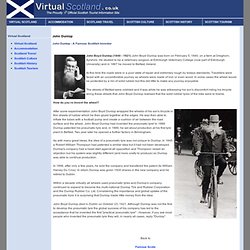 He studied to be a veterinary surgeon at Edinburgh Veterinary College (now part of Edinburgh University) and in 1867 he moved to Belfast, Ireland. At this time the roads were in a poor state of repair and extremely rough by todays standards. Travellers were faced with an uncomforable journey as wheels were made of iron or even wood. In some cases the wheel would be protected by a rim of solid rubber but this did little to make any journey enjoyable. The streets of Belfast were cobbled and it was while he was witnessing his son's discomfort riding his tricycle along these streets that John Boyd Dunlop realised that the solid rubber tyres of the bike were to blame. How do you re-invent the wheel? Inventor John Dunlop Biography. Overview of John Boyd Dunlop. John Boyd Dunlop. Dunlop the reputed inventor of the pneumatic tyre was born in 1840 to a farming family in Dreghorn. 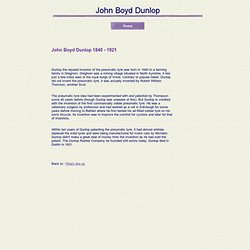 Dreghorn was a mining village situated in North Ayrshire, it lies just a few miles east of the royal burgh of Irvine. Contrary to popular belief, Dunlop did not invent the pneumatic tyre, it was actually invented by Robert William Thomson, another Scot. The pneumatic tyre idea had been experimented with and patented by Thompson some 40 years before (though Dunlop was unaware of this). But Dunlop is credited with the invention of the first commercially viable pneumatic tyre. He was a veterinary surgeon by profession and had worked as a vet in Edinburgh for some years before moving to Belfast where he first tested his air-filled rubber tyre on his son's tricycle. Within ten years of Dunlop patenting the pneumatic tyre, it had almost entirely replaced the solid tyres and were being manufactured for motor cars by Michelin. Bicycle tire. A cross section of a clincher tire with a puncture preventing layer (in blue) between the casing and the tread An inner tube rolled up for storage or to be carried as a spare Modern bicycle tires can be classified by several different criteria: how they attach to the rim: clincher or tubular,if and how they hold air: tubed, tubeless, or solid,what type of tread they have: slick or knobby. 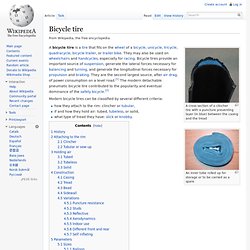 History[edit] A tubed, clincher tire showing the inner tube protruding between the tire and the rim Tubular tire rolled from rim to show glue between them Clincher cross section schematic with 1: rim, 2: rim strip, 3: rim braking surface, 4: bead core, 5: inner tube, 6: casing, 7: tread The first bicycle "tires" were iron bands on the wooden wheels of velocipedes.[3] These were followed by solid rubber tires on penny-farthings.[4] In an attempt to soften the ride, rubber tires with a hollow core were also tried.[5] Finally, the detachable tire was introduced in 1891 by Édouard Michelin. 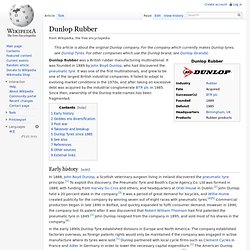 It was founded in 1889 by John Boyd Dunlop, who had discovered the pneumatic tyre. It was one of the first multinationals, and grew to be one of the largest British industrial companies. It failed to adapt to evolving market conditions in the 1970s, and after taking on excessive debt was acquired by the industrial conglomerate BTR plc in 1985. Since then, ownership of the Dunlop trade-names has been fragmented. Early history[edit] In 1888, John Boyd Dunlop, a Scottish veterinary surgeon living in Ireland discovered the pneumatic tyre principle.[1] To exploit this discovery, the Pneumatic Tyre and Booth's Cycle Agency Co. A 1914 Dunlop print advertisement for garden hoses Originally the company did not manufacture tyres, instead assembling components from other manufacturers at the Dunlop factory in Coventry.[1] From the late 1890s however, the company began to acquire its own rubber mills.[1] Geddes era diversification[edit]

Your Place And Mine - Greater Belfast - Inventors - John Boyd Dunlop.