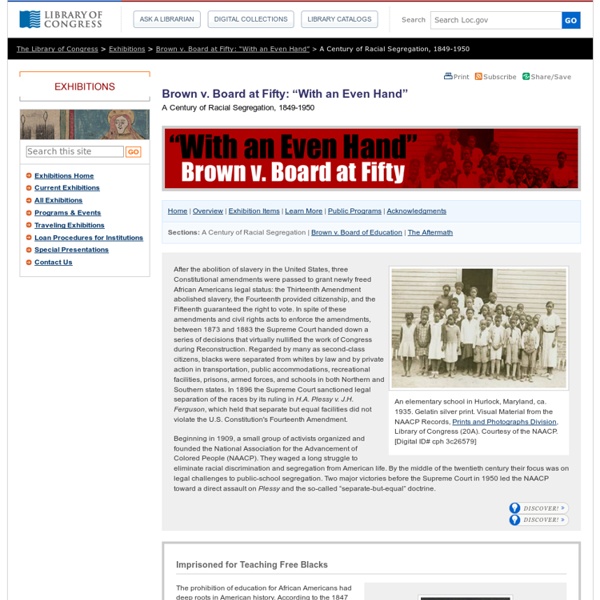 An elementary school in Hurlock, Maryland, ca. 1935. Gelatin silver print. Visual Material from the NAACP Records, Prints and Photographs Division, Library of Congress (20A). After the abolition of slavery in the United States, three Constitutional amendments were passed to grant newly freed African Americans legal status: the Thirteenth Amendment abolished slavery, the Fourteenth provided citizenship, and the Fifteenth guaranteed the right to vote. Beginning in 1909, a small group of activists organized and founded the National Association for the Advancement of Colored People (NAACP). Discover! Imprisoned for Teaching Free Blacks The prohibition of education for African Americans had deep roots in American history. Margaret Crittenden Douglass. Upholding School Segregation: The Roberts Case Five-year-old Sara Roberts was forced to walk past several white schools to reach the “colored” primary school. Charles Sumner. The Fourteenth Amendment Plessy v. By the time Homer A. Phillip B. Related:  Of Mice and Men by John Steinbeck • OF MICE AND MEN • US Civil Rights

Race During the Great Depression - American Memory Timeline- Classroom Presentation The problems of the Great Depression affected virtually every group of Americans. No group was harder hit than African Americans, however. By 1932, approximately half of black Americans were out of work. In some Northern cities, whites called for blacks to be fired from any jobs as long as there were whites out of work. Racial violence again became more common, especially in the South. Lynchings, which had declined to eight in 1932, surged to 28 in 1933. Although most African Americans traditionally voted Republican, the election of President Franklin Roosevelt began to change voting patterns. Still, discrimination occurred in New Deal housing and employment projects, and President Roosevelt, for political reasons, did not back all of the legislation favored by such groups as the National Association for the Advancement of Colored People (NAACP).

GCSE Bitesize: The Depression The 1950-60's Black Civil Rights Movement in America The actions of the 1900's black civil rights movement, and a brief outline of the events that occurred. America is advertised as the world's greatest democracy, the land of freedom and equality. However, as little as 40 years ago this slogan was far from the truth. African-Americans were discriminated against constantly, tortured and killed for no other reason than their skin color. This was the period of the Black Civil Rights movement, which saw the birth of many modern-day heroes such as Martin Luther King. MLK was looked up to due to his non-violent protest based on the teachings of the Bible and Mahatma Gandhi. The first real success of the Black Civil Rights movement was the attempt to desegregate primary schools in a case called "Brown vs Board". In 1st December 1955, a national hero was introduced whom would prove to be a very big component in the Black Civil Rights movement. Non-violent protests were starting to gain in power, due to the successful Montgomery Bus Boycott.

The KKK and racial problems The Ku Klux Klan was basically based in the south of America. Here they targeted those set free after the American Civil War - the African Americans. The KKK had never considered the former slaves as being free and terrorised Africa American families based in the South. America experienced great economic prosperity during the 1920's but not much of it filtered to the South. Many different groups had emigrated to America over the years. A meeting of the KKK in 1922 The leader of the KKK in the 1920’s was a dentist called Hiram Wesley Evans whose name in the KKK was Imperial Wizard. The Black Americans tried to fight back using non-violent methods.

The History of Mental Illness: From "Skull Drills" to "Happy Pills" The limitlessly varied personalities of human beings have fascinated both scientists and fellow members of society throughout the existence of humankind. Of particular interest has been what happens when man’s mind turns against him, and what can be done, if anything at all, to reverse this tragic event. Attempts to treat mental illness date back as early as 5000 BCE as evidenced by the discovery of trephined skulls in regions that were home to ancient world cultures (Porter 10). Trephining (also referred to as trepanning) first occurred in Neolithic times. In ancient Mesopotamia, priest-doctors treated the mentally ill with magico-religious rituals as mental pathology was believed to mask demonic possession (Alexander 19). Figure 1: A depiction of treppaning from the painting Cutting the Stone (circa 1494) by Hieronymus Bosch. In all of these ancient civilizations, mental illness was attributed to some supernatural force, generally a displeased deity. Blue, Amy V. Houston, R.A.

What are facts about racism in 1930s America In the 1930s, the Ku Klux Klan was still active, but in a state of decline compared to the 1910s and 1920s. Some programs such as the Federal Music Project and the Federal Theater Project helped blacks find work during this time, when The Great Depression was making it more difficult. Blacks and Hispanic Americans were expected to be paid less than a white employee for the same jobs. Hundreds of racially charged lynchings occurred in the 1930s, and an anti-lynching law had to be put into place in 1937. Blacks had to walk on the opposite side of the road to white people. Blacks had to call white children "Sir" and "ma'am" and had to ride in the back of public transport. While the institution of slavery makes it easy to isolate blacks in a discussion of prejudice in America throughout history, such examples are not the only, or even the best examples of such. Then consider the open prejudice the Germans experienced in the US during both the first and second World Wars.

Protests of 1968 The protests of 1968 comprised a worldwide escalation of social conflicts, predominantly characterized by popular rebellions against military, capitalist, and bureaucratic elites, who retorted with an escalation of political repression. In capitalist countries, these protests marked a turning point for the Civil Rights movement in the United States, which produced revolutionary movements like the Black Panther Party. In reaction to the Tet Offensive, protests also sparked a broad movement in opposition to the Vietnam War all over the United States and even into London, Paris, Berlin and Rome. In socialist countries there were also protests against bureaucratic and military elites. Background[edit] Background speculations of overall causality vary about the political protests centering on the year 1968. Capitalist states[edit] The Cuban Missile Crisis and the Cold War was another shared experience of this generation. The college students of 1968 embraced the New Left politics.

Black Civil Rights….America in the 1950′s | Peacemakervoices's Blog The Black Civil Rights Movement (CRM) campaigned to end Racism and Inequality for black people between 1955 and 1968. Before the CRM many towns and cities in America were segregated- black people could not use the same building entrance as a white person, eat in the same cafe, sit in the same taxi or use the same drinking fountain. Not only that, the police, judges and juries were all white and the laws supported these inequalities. The CRM challenged not only the laws but people’s attitudes- attitudes that saw black people being treated as inferior citizens because of the colour of their skin. People like Martin Luther King Jr used non-violent civil disobedience to challenge laws that enforced segregation. People sat at lunch counters they weren’t meant to, travelled on buses that were for white people and ignored segregation rules. Supported by the then President, John F Kennedy, the movement grew and laws began to change. Like this: Like Loading...

The History of Mental Illness "Caring , and seeing with the heart.", answered the soul. -Unknown The History of Mental Illness 1st Revolution: Hospitalization. 2nd Revolution: Moral Management. 3rd Revolution: Society Cooperation & Interaction. by Kimberly Leupo Treating public illness has long been a process of trial and error guided by public attitudes and medical theory. The Colonial American society referred to those suffering from mental illnesses as ‘lunatics” which interestingly enough was derived from the root word lunar meaning, “moon.” Those considered lunatics were grouped into two all-encompassing categories: mania and melancholy. practice entailed draining the bad blood from the individual, unfortunately this inhumane practice normally resulted in death or the need for lifelong care; at best the odds were one in three that this procedure would actually lead to an improvement in the patient’s health. A pivotal point in the history of the mental illness was the Civil War. mental health centers.

Surviving the Dust Bowl . American Experience . WGBH Schedule Shop About the Series Sign up for Newsletter Contact Us Podcasts For Teachers Corporate Sponsorship Terms of Use Privacy Policy Additional Funding Provided By: Website ©1996-2012 WGBH Educational Foundation. This site is produced for PBS by WGBH. Full Website Jim Crow Laws - Separate Is Not Equal “Marriages are void when one party is a white person and the other is possessed of one-eighth or more negro, Japanese, or Chinese blood.” —Nebraska, 1911 “Separate free schools shall be established for the education of children of African descent; and it shall be unlawful for any colored child to attend any white school, or any white child to attend a colored school.” —Missouri, 1929 “All railroads carrying passengers in the state (other than street railroads) shall provide equal but separate accommodations for the white and colored races, by providing two or more passenger cars for each passenger train, or by dividing the cars by a partition, so as to secure separate accommodations.” —Tennessee, 1891 See more Jim Crow laws Restricted real-estate covenant In communities across the country, property owners signed agreements called restrictive covenants.

Martin Luther King Jr. Martin Luther King, Jr., (January 15, 1929-April 4, 1968) was born Michael Luther King, Jr., but later had his name changed to Martin. His grandfather began the family's long tenure as pastors of the Ebenezer Baptist Church in Atlanta, serving from 1914 to 1931; his father has served from then until the present, and from 1960 until his death Martin Luther acted as co-pastor. Martin Luther attended segregated public schools in Georgia, graduating from high school at the age of fifteen; he received the B. In 1954, Martin Luther King became pastor of the Dexter Avenue Baptist Church in Montgomery, Alabama. In 1957 he was elected president of the Southern Christian Leadership Conference, an organization formed to provide new leadership for the now burgeoning civil rights movement. At the age of thirty-five, Martin Luther King, Jr., was the youngest man to have received the Nobel Peace Prize. Selected Bibliography Adams, Russell, Great Negroes Past and Present, pp. 106-107. Recommended:

The racial differencies between whites and blacks and whites and aboriginals were present and significant at that time, and sadly still remaining a bit today. Discrimination towards couloured people is not now abolished by the Human Rights Chart published in 1949, after the Segregation. by gagnonseguinzilio Oct 31

Related:
Related:  Of Mice and Men by John Steinbeck   -  OF MICE AND MEN   -  US Civil Rights