THE NEW ATLANTIS: Master Plan Of The Ages. Cosmic Convergence Research Group The Hidden Connections between the Elizabethan Court led by Sir Francis Bacon, the Founding Fathers of the American Republic guided by Comte de Saint Germain, and the Kremlin Leaders Assembled by Russian President Vladimir Putin This is a story which spans the entirety of the 6000 yearlong Kali Yuga. Also known as the Age of Quarrel, which began with the Mayan Long Count Calendar in approximately 3113 B.C.E., the Kali Yuga is analogous to the present Iron Age. The true history of the current era, which is defined by so many epic wars and longstanding conflicts, is not only very protracted and extremely complex, many of the most important events and personages lie deeply hidden in its murky past. There are several significant threads interwoven throughout this multi-millennial saga which graphically portray our current Age of Conflict. 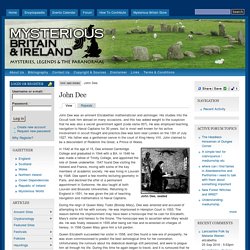 His studies into the Occult took him abroad on many occasions, and this has added weight to the suspicion that he was also a secret government agent (code name 007). He was employed teaching navigation to Naval Captains for 30 years, but is most well known for his active involvement in occult thought and practice.Dee was born near London on the 13th of July 1527. His father was a gentleman server in the court of King Henry VIII. Library Catalogue. Scholar, courtier, magician: the lost library of John Dee. January – July 2016 A major exhibition revealing the fascinating life, times and lost library of Queen Elizabeth I’s most famous ‘conjurer’. 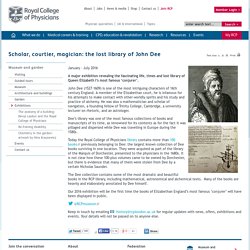 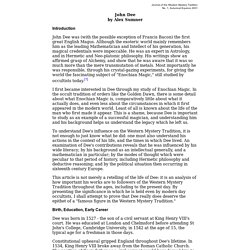 Although the exoteric world mainly remembers him as the leading Mathematician and Intellect of his generation, his magical credentials were impeccable. John Dee and Thomas Digges: like father, like son? This paper was given at a 1995 meeting on John Dee and finally appeared in Stephen Clucas (ed.), John Dee: Interdisciplinary Studies in English Renaissance Thought, International Archives of the History of Ideas / Archives internationales d’histoire des idées, vol. 193 (Dordrecht: Springer, 2006). 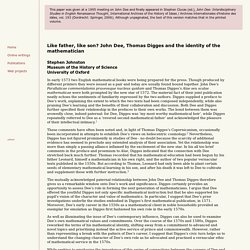 Although unpaginated, the text of this version matches that in the printed volume. Stephen Johnston Museum of the History of Science University of Oxford In early 1573 two English mathematical books were being prepared for the press. Though produced by different printers they were issued as a pair and today are usually found bound together. John Dee’s Parallaticae commentationis praxeosque nucleus quidam and Thomas Digges’s Alae seu scalae mathematicae were both prompted by the new star of 1572. The mutually acknowledged paternal relationship between John Dee and Thomas Digges therefore gives us a remarkable window onto Dee’s work and significance. 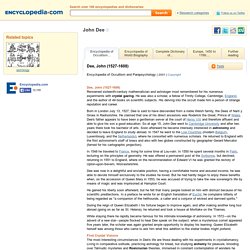 He was also a scholar, a fellow of Trinity College, Cambridge, England, and the author of 49 books on scientific subjects. His delving into the occult made him a person of strange reputation and career. Born in London July 13, 1527, Dee is said to have descended from a noble Welsh family, the Dees of Nant y Groes in Radnorshire. He claimed that one of his direct ancestors was Roderick the Great, Prince of Wales. Dee's father appears to have been a gentleman server at the court of Henry VIII and therefore affluent and able to give his son a good education. In 1548 he traveled to France, living for some time at Lou-vain. Dee was now in a delightful and enviable position, having a comfortable home and assured income, he was able to devote himself exclusively to the studies he loved. While staying there he rapidly became famous for his intimate knowledge of astronomy. Dr John Dee (1527-c1608) Dr John Dee (1527-1608/9) John Dee was a much respected scientist in his own time, but subsequently derided as a conjurer and a trickster. 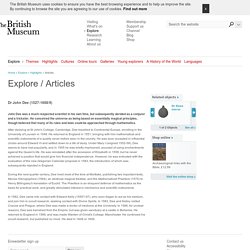 He conceived the universe as being based on essentially magical principles, though believed that many of its rules and laws could be approached through mathematics. Francis Bacon & John Dee. By D.W.Cooper & Lawrence Gerald There has been more written about Francis Bacon's life from the age of sixteen, when he left England and travelled to the continent during the late 1570's meeting up with the leading thinkers of the cultural revolution in France, than his other formative years and the elders who also shaped his mind. 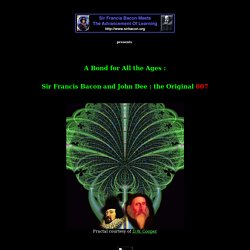 Alfred Dodd in his book Francis Bacon's Personal Life -Story quotes Bacon's biographer and chaplain, Dr.Rawley, "I shall not tread too near upon the heels of truth", letting us know that this biography of Bacon would not be too exact in it's details. Dodd's book speculates that Queen Elizabeth secretly supervised the education of young Francis. There are only brief accounts of his early days at York House and Gorhambury with his adoptive parents Sir Nicholas and Lady Anne Bacon. The Earl of Leicester, Robert Dudley (the Queen's favorite), was the first man, according to Dodd to license a band of players for dramatic purposes. 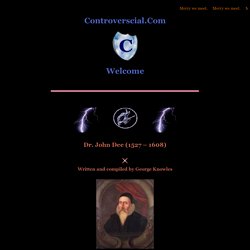 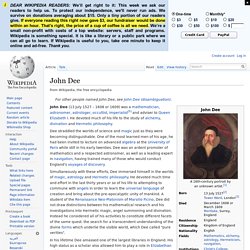 He devoted much of his life to the study of alchemy, divination and Hermetic philosophy. In his lifetime Dee amassed one of the largest libraries in England. His high status as a scholar also allowed him to play a role in Elizabethan politics. He served as an occasional adviser and tutor to Elizabeth I and nurtured relationships with her ministers Francis Walsingham and William Cecil.