Drowning in Darkness Chapter 1, a sherlock fanfic. (NOTE: Usual disclaimer-I own nothing but my own plot. 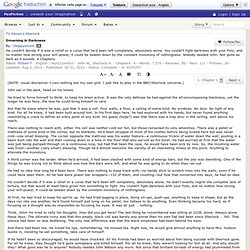 I just like to play in the BBC/Sherlock universe.) John sat in the dark, head on his knees. He tried to force himself to think, to keep his brain active. It was the only defense he had against the all-encompassing blackness, yet the longer he was here, the less he could bring himself to care. Not that he knew where he was, just that it was a cell. There was nothing to reach with, either. A third corner was the larder. He had no idea how long he'd been here. Bring Me Back A Dog - Chapter 1 - MelodramaticMrTails - Sherlock. Chapter Text This was great. 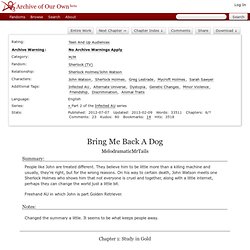 In fact, it was better than great, it was fucking fantastic. Wee Doctor - americanjedi - Sherlock. That Would Work, a sherlock fanfic. Note: I own nothing but my own plot. 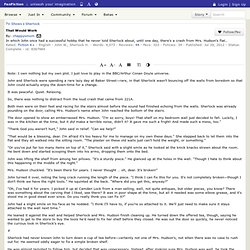 I just love to play in the BBC/Arthur Conan Doyle universe. John and Sherlock were spending a rare lazy day at Baker Street—rare, in that Sherlock wasn't bouncing off the walls from boredom so that John could actually enjoy the down-time for a change. It was peaceful. Quiet. Relaxing. So, there was nothing to distract from the loud crash that came from 221A. Both men were on their feet and racing for the stairs almost before the sound had finished echoing from the walls. The door opened to show an embarrassed Mrs. John Just Can't Catch a Break - Loopy456 - Sherlock. The first time, it’s funny. 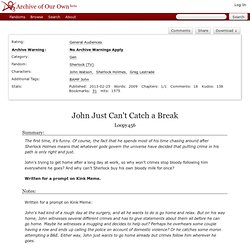 Of course, the fact that he spends most of his time chasing around after Sherlock Holmes means that whatever gods govern the universe have decided that putting crime in his path is only right and just. Better him than some other poor bugger who couldn’t deal with it. The thing is, after the day he’s had, John doesn’t particularly feel like pulling some stupid, doped-up kid out of the window of the house he’s trying to break in to. Not at all. He’s Not Paid Enough to Deal with This Shit - janonny - Sherlock. Part 1 It wasn’t enough that John was shot in the line of duty and rewarded with mandatory therapy. 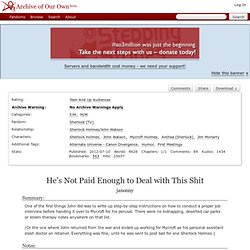 It wasn’t enough that he limped about London with no purpose and no job; he had to be kidnapped as well, kidnapped and brought to an underground car park. He didn’t even rate a motel. A man with an umbrella was posing in the deserted car park, standing with his legs crossed in front of a lone chair. Carrying the Torch, a sherlock fanfic. Sherlock got the first hint months in advance at an ordinary crime scene when John mentioned the upcoming Olympics. 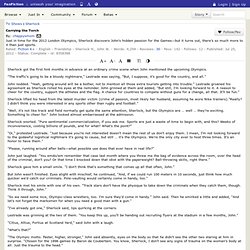 Spinning His Wheels, a sherlock fanfic. (Sequel to "That Would Work" (though they can be read independently. 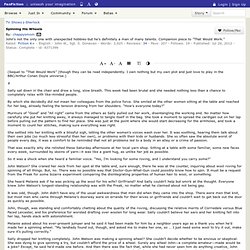 I own nothing but my own plot and just love to play in the BBC/Arthur Conan Doyle universe.) Sally sat down in the chair and drew a long, slow breath. This week had been brutal and she needed nothing less than a chance to completely relax with like-minded people. By which she decidedly did not mean her colleagues from the police force. She smiled at the other women sitting at the table and reached for her bag, already feeling the tension draining from her shoulders. Murmurs of "Good" and "All right" came from the others as Sally pulled out her work, disentangling the working end. She settled into her knitting with a blissful sigh, letting the other women's voices wash over her. That was exactly why she relished these Saturday afternoons at her local yarn shop.

Strong Swimmer, a sherlock fanfic. NOTE: Takes place after TGG, when Lestrade and the others are still trying to figure John out-who is this guy, and how does he stand Sherlock Holmes, anyway? 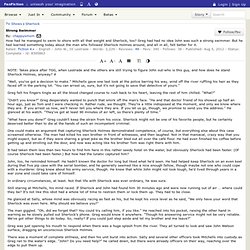 # "Well, you've got a decision to make. " Mitchells gave one last look at the police barring his way, wind off the river ruffling his hair as they faced off in the parking lot. "You can arrest us, sure, but it's not going to save that detective of yours. " Greg felt his fingers tingle as all the blood changed course to rush back to his heart, leaving the rest of him chilled.

"Didn't you know? " "What have you done? " The Devil's In The Detail, a sherlock fanfic. Disclaimer: I own nothing but the original story line! 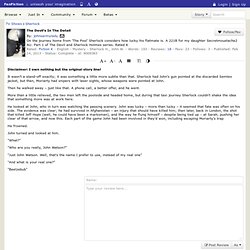 It wasn't a stand-off exactly; it was something a little more subtle than that. Sherlock had John's gun pointed at the discarded Semtex jacket, but then, Moriarty had snipers with laser sights, whose weapons were pointed at John. Then he walked away – just like that. The Acronym - Chapter 1 - DancingGrimm - Sherlock. Chapter Text “Sherlock, are you any good with acronyms?” 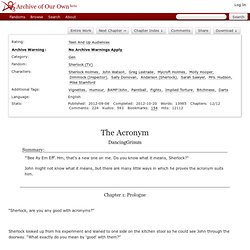 Sherlock looked up from his experiment and leaned to one side on the kitchen stool so he could see John through the doorway. “What exactly do you mean by ‘good’ with them?” Bravery Is By Far The Kindest Word, a sherlock fanfic. Angsty one-shot – no slash, just friendship. If you like, please review….Disclaimer: I don't own any of the Sherlock characters (So wish John was mine though!) It wasn't going to happen – not this way, not now. Looking down from his hiding place in the rafters John could see Sherlock slumped in the chair, his normally soft ebony curls plastered to his head with sweat, a slow, steady drip of blood coming from his face. Nine Tenths of the Law - Chapter 1 - bendingsignpost - Sherlock. Mute the World, a sherlock fanfic. Mute the World The world is split between those who have abilities and those who do not.

Sherlock is what they call an alternative, someone who struggled for years to suppress and essentially rid themselves of their abilities. Suddenly, all this talk of abilities comes into play when Sherlock meets the seemingly normal John Watson. Shadows on the Wall - AraSigyrn - Sherlock (TV), Sherlock Holmes & Related Fandoms. It starts as a whisper during basic training, a little internal voice that chips in just before he makes a decision. Like when Myers, the hot-shot with the perfect scores, fires what everyone believes is a full clip and the little voice says wait.

John is the only one who doesn't stand and so the last bullet (fired when Myers spins his pistol like a western gunslinger) goes through Hodges' leg instead of John's chest. No Fare - PrettyArbitrary - Sherlock (TV), Sherlock Holmes & Related Fandoms. For a moment, in Piccadilly, John thinks he hears his name being called. It rouses him briefly from the brooding slosh of his own thoughts, but ‘John’ is a common name, after all.

He puts his head back down and doesn’t stop. These days, it’s too hard to get up the momentum to move forward again. By the time he’s finished running his errands, his leg’s screaming like twisted shrapnel and his right shoulder is on fire. Bloody cane. When one pulls over for him only a minute later, he represses an impulse to use that cane to knock a dent into the bonnet. A good old fashioned story Chapter 1: More, a sherlock fanfic. TheDarkestShinobi: I was ensnared, mesmerized and taken by Sherlock. Now, I've only seen the first 5 episodes and 20 minutes of the 6th. (I'll get to it soon enough but NO SPOILERS PLEASE) Don't ask me how, it just worked that way. That being said, I may not know the characters as well as you do but I'm going to give it a whirl and I hope that you'll enjoy it.

Dragon!John - TardisIsTheOnlyWayToTravel - Sherlock. Oblivious And Blind, a sherlock fanfic. Hey y'all! So I found this story on my computer, and decided as an award to myself because of all my study for my final year at high school :), I'll finish it and post it to share. Heartlessly Cursed - Chapter 1 - Mother_of_Monsters - Sherlock.

Once upon a time, as most things like these tend to begin, there was a happy little boy named John, who lived with his family in a small town not far from the smog-infested streets of the great city of London. His parents, Mr. and Mrs. North of Normal Chapter 1: Of Fragrant Tea & Bizarre Détentes, a sherlock fanfic. A/N: This is a three part continuation of my story Shooter. All this takes place in the Shooter! Infallible - BlametheCupcake - Sherlock. People make mistakes; it is one of the fundamentals of human nature. Mycroft knew that and was generally the one to clean up after people. Even he made mistakes, he would admit it and he could tell you exactly when (March 27, 1997 he said something unflattering about his brother in front of his mother) if you cared to ask him.

Of Surgeons and Soldiers Chapter 1, a sherlock fanfic. For John, because he can never have too much love. Ripeness is All - savithny - Sherlock. Contrary to popular opinion, Sherlock did care what happened to John Watson. John was important. Dead Wrong, a sherlock fanfic. In all her years working at New Scotland Yard, Sally Donovan would like to think that she had picked up on quite a number of things (regardless of what that freak Sherlock suggested). So when she woke up in handcuffs, she knew something was wrong. Dr. Watson's Bad Day - Katzedecimal - Sherlock. Wee Doctor - americanjedi - Sherlock. Man Down - 221b_hound - Sherlock. A tiny whimper sounded from behind Sherlock’s closed bedroom door.

Rapid breathing. A distressed moan. The sounds of a man in phantom pain, in imagined or remembered terror. Sherlock stood outside his own door, hand on the handle, wondering what was best to do. It wasn’t often that he was caught like this, unsure of the correct action. Cicatrix - tripodion - Sherlock (TV), Sherlock Holmes & Related Fandoms. Indelible - abundantlyqueer - Sherlock. “Sherlock, you came,” Lestrade says. In the alley - CactusWren - Sherlock. John's eyes feel full of sand. Radioactive, a sherlock fanfic. And A Doctor - Chapter 1 - stillwaters01 - Sherlock. The Freak and the Maniac - Laur - Sherlock (TV), Sherlock Holmes & Related Fandoms. Show Chapter. John Watson: Battle Butler - lalunaticscribe - Sherlock.