12 Reasons Pisces Is The Best Zodiac Sign Of All. Born between February 19 and March 20 is the twelfth and last sign of the Zodiac, Pisces. 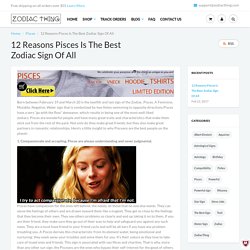 A Feminine, Mutable, Negative, Water sign that is symbolized by two fishes swimming in opposite directions.Pisces have a very “go with the flow” demeanor, which results in being one of the most well-liked zodiacs. Pisces are wonderful people and have many great traits and characteristics that make them stick out from the rest of the pack. Not only do they make great friends, but they also make great partners in romantic relationships. Here's a little insight to why Pisceans are the best people on the planet: 1.

Pisces have compassion for the ones left behind, the needy, all those that no one else wants. Level Of Judgement = Zero : In need of someone Non Judgmental? Great Pisces. Snake Symbolic Meaning. Snake Meaning and Symbolism Snake symbolic meaning, overwhelmingly and in various cultures, deals with primordial life force and usually turns our attention to gender supremacy (both male and female). 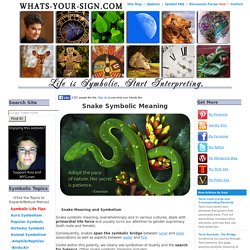 Consequently, snakes span the symbolic bridge between lunar and solar associations as well as aspects between water and fire. Coiled within this polarity, we clearly see symbolism of duality and the search for balance. Other snake symbolic meaning includes: Quick-List of Symbolic Snake Meanings CyclesRebirthPatienceFertilityEternityBalanceCunningIntuitionAwarenessHealingIntellectProtectionSolemnityRejuvenationTransformationOccult (hidden) KnowledgeMale/Female, Yin-Yang, Duality As a Native American Indian symbol (depending on the nation/tribe) the snake can be a masculine symbol, associated with the phallus of lightning which is considered a medicine staff of tremendous assertive power. In the keen Celtic mind, snake symbolic meaning of transformation came from the shedding of its skin. 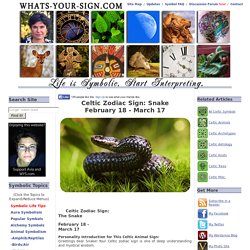 Your Celtic zodiac sign is one of deep understanding and mystical wisdom. Now, don't freak out on me. I know the snake isn't everybody's favorite creature. PISCES: 5 Tips for More Self-Confidence and Less Self-Doubt. Pisces people love to beat themselves up. 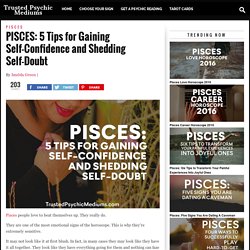 They really do. They are one of the most emotional signs of the horoscope. This is why they’re extremely sensitive. It may not look like it at first blush. In fact, in many cases they may look like they have it all together. Don’t let this fool you. The truth is Pisces people look at the world in terms of emotional maps, in terms of emotional comfort zones. They often divide people based on the emotional signals they get from people around them and people in their lives. MYSTICMAMMA.COM : consciousness, spirituality, astrology, wisdom, inspiration new. FULL MOON in water bearing Aquarius. 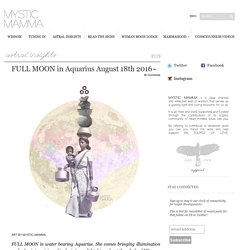 She comes bringing illumination and a feminine vision of inclusivity and thinking about the whole of US. Balancing on the axis of a LEO Sun and and AQUARIUS Moon we stand at the crossroads of ME:WE. Dr. Kay - Pisces And the Fishes: Compatibility With the Music of Sigmund Romberg. “Pisces – sign of compassion and empathy – has great psychic depth with deep-felt sensitivity. 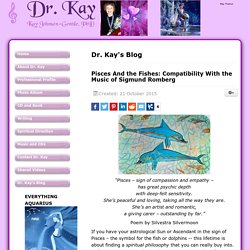 She’s peaceful and loving, taking all the way they are. She’s an artist and romantic, a giving carer – outstanding by far.” Poem by Silvestra Silvermoon If you have your astrological Sun or Ascendant in the sign of Pisces – the symbol for the fish or dolphins -- this lifetime is about finding a spiritual philosophy that you can really buy into. In fact in my opinion, that is the most important thing for you to do in this lifetime. 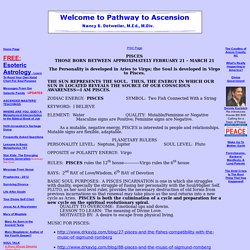 ZODIAC ENERGY: PISCES SYMBOL: Two Fish Connected With a String ELEMENT: Water QUALITY: Mutable/Feminine or Negative Masculine signs are Positive; Feminine signs are Negative. And the Astrological sign Pisces. A man of talent and a musician from birth, Nikolai Rimsky-Korsakov was a composer, teacher, conductor, and a well-known public figure. 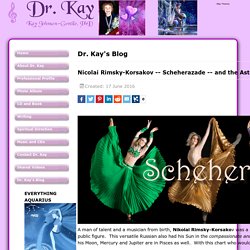 This versatile Russian also had his Sun in the compassionate and artsy sign of Pisces. And if that were not enough his Moon, Mercury and Jupiter are in Pisces as well. With this chart who would expect anything but a musician extraordinaire? Pisces is the most dominant focus of Rimsky-Korsakov's natal chart. Also, most of his planets are posited in his 10th house of career, public life and his ambitions. Rimsky-Korsakov was born into an aristocratic family in the small town of Tikhvin in Novgorod Province, Russia.

Nicolai Rimsky-Korsakov His father, Andrey Rimsky-Korsakov, was a governor of the Volyn Province and his mother, Sofya, a landowner’s daughter. Due to his love of music, young Nikolai was taught the principles of music composition at an early age. Dr. Kay - Pisces and the Music of Sigmund Romberg. “Pisces – sign of compassion and empathy – has great psychic depth with deep-felt sensitivity. 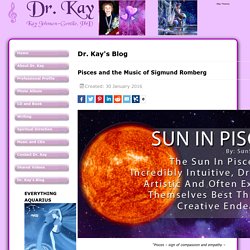 She’s peaceful and loving, taking all the way they are. She’s an artist and romantic, a giving carer – outstanding by far.”