Giant invisible UFO, Sun diving comet & unknown deep space object captured by SOHO Spacecraft. Mullard Space Science Laboratory. A giant lava lamp inside the Earth might be flipping the planet's magnetic field. If you could travel back in time 41,000 years to the last ice age, your compass would point south instead of north. 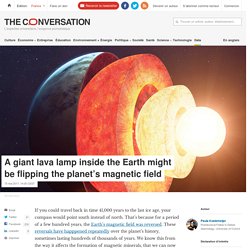 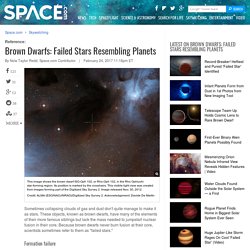 These objects, known as brown dwarfs, have many of the elements of their more famous siblings but lack the mass needed to jumpstart nuclear fusion in their core. Because brown dwarfs never burn fusion at their core, scientists sometimes refer to them as "failed stars. " Brown dwarfs start out just like their main-sequence siblings. A cloud of dust and gas collapses, gravity piling the components in tightly and forming a young protostar at its center. For main sequence stars, the gravity pushes inward until hydrogen fusion is jump-started in their core. "Brown dwarfs are the missing link between gas giant planets like Jupiter and small stars like red dwarfs," Ian McLean, an astronomer at the University of California, Los Angeles, said in a statement.

Brown dwarfs come in a variety of masses and temperatures. Stars are classified by their spectral type, or the energy they radiate. Coldest Known Star Is a Real Misfit. Astronomers have detected a new candidate for the coldest known star – one whose temperature is roughly equivalent to a fresh cup of tea. 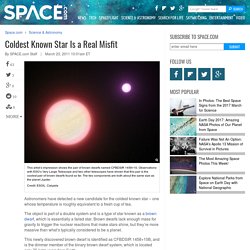 Stars are hot, right? Not this star. Astronomers have found the coolest star – temperature-wise, that is – although some would argue it should not be called a star. 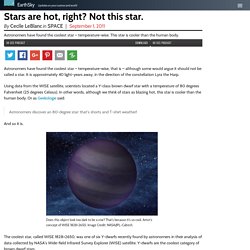 It is approximately 40 light-years away, in the direction of the constellation Lyra the Harp. Using data from the WISE satellite, scientists located a Y-class brown dwarf star with a temperature of 80 degrees Fahrenheit (25 degrees Celsius). In other words, although we think of stars as blazing hot, this star is cooler than the human body. Or as Geekologie said: Astronomers discover an 80-degree star: that’s shorts and T-shirt weather! And so it is. Does this object look too dark to be a star? The coolest star, called WISE 1828+2650, was one of six Y-dwarfs recently found by astronomers in their analysis of data collected by NASA’s Wide-field Infrared Survey Explorer (WISE) satellite. Star Colors and Temperatures. Stars appear to be exclusively white at first glance. 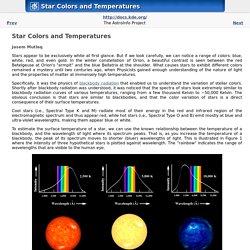 But if we look carefully, we can notice a range of colors: blue, white, red, and even gold. What is the Hottest Star? - Universe Today. [/caption] Stars can range in temperature, from the relatively cool red dwarfs to superhot blue stars. 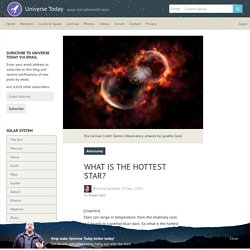 So what is the hottest star in the Universe? First, let’s talk a bit about temperature. The color of a star is a function of its temperature. If a star looks red, that means its surface temperature is approximately 2,500 Kelvin. Just for comparison, our Sun, which actually looks white from space, measures about 6,000 Kelvin. Sunquakes, siesmic activity on the sun and solar flares. Sunquakes and solar flare activity are two of the great remaining mysteries of the sun. 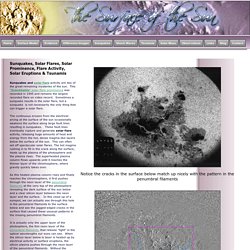 This "Granddaddy" solar flare prominence was recorded in 1945 and remains the largest recorded flare on video record. Sometimes a sunquake results in the solar flare, but a sunquake is not necessarily the only thing that can trigger a solar flare. The continuous erosion from the electrical arcing at the surface of the sun occasionally weakens the surface along large fault lines resulting in sunquakes. These fault lines eventually rupture and generate solar flare activity, releasing huge amounts of heat and energy from the hot, dense magma-like layers below the surface of the sun. This can often set off spectacular solar flares. Fiery Looping Rain on the Sun. Hypnotic Solar Explosions in 4k. Magnificent Eruption in Full HD. Thermonuclear Art – The Sun In Ultra-HD (4K) Secrets of the Sun PBS Nova HD 1080p. Space Weather Model Helps Simulate Solar Storms. Related multimedia at NASA Goddard's Scientific Visualization Studio Scientists from NASA and three universities have presented new discoveries about the way heat and energy move and manifest in the ionosphere, a region of Earth’s atmosphere that reacts to changes from both space above and Earth below. 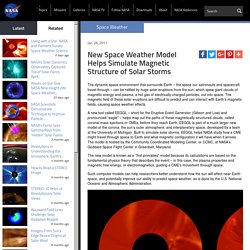 Far above Earth’s surface, within the tenuous upper atmosphere, is a sea of particles that have been split into positive and negative ions by the sun’s harsh ultraviolet radiation. NSO/GONG: Helioseismology. Over the last 15 years or so a new approach has emerged that provides a means of making direct measurements of the internal structure and dynamics of the Sun and, ultimately, other stars as well. 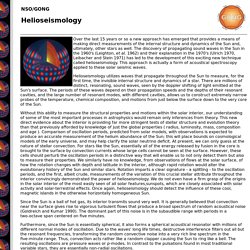 The discovery of propagating sound waves in the Sun in the 1960's (Leighton, et al. 1962) and their explanation in the 1970's (Ulrich 1970, Leibacher and Stein 1971) has led to the development of this exciting new technique called helioseismology. This approach is actually a form of acoustical spectroscopy applied to these solar seismic waves. Solar Eruptions Cause Sunquakes. A study led by UCL's Mullard Space Science Laboratory has shown for the first time that sunquakes can be produced during eruptions of magnetic field and charged particles, as the immense magnetic structure blasts off into the Solar System. 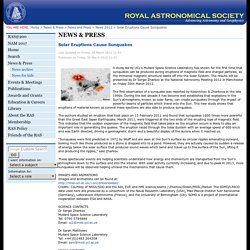 The results will be presented by Dr Sergei Zharkov at the National Astronomy Meeting 2012 in Manchester on Friday 30th March 2012.