Astronomy Picture of the Day 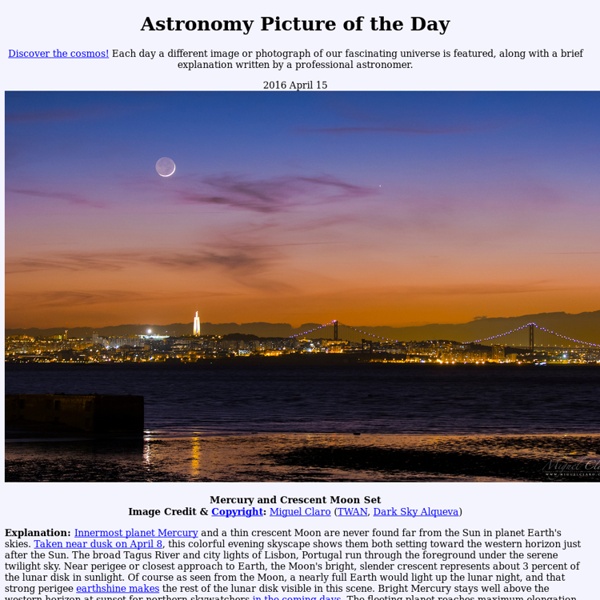 The Wonder of Ice Caves Where you have lava tubes or limestone passage ways below the ground, occasionally a rare form of cave evolves – the . Strange, mysterious and often dangerous they are often difficult to get to and so not seen by huge amounts of people. Take a short tour in to the magical world of the ice cave.

Hubble data predicts Milky Way galactic collision When Galaxies Collide! It sounds like an early science fiction novel. However, analysis of Hubble measurements shows that our own Milky Way galaxy is moving toward a head-on collision with our nearest neighbor, the Andromeda galaxy (also known as M31). The collision will start in about four billion years, and over the following three billion years the two spiral galaxies will coalesce into a large elliptical galaxy. Based on this data, NASA has produced a video of the upcoming collision. View all Sun`s path June to December « Helpmyphysics Last June I placed some photographic film into a tin cannister with a small hole punched into its side. The tin cannister was then attached to a clothes pole in my backgarden and left. This afternoon I fetched the cannister and took the photographic film out. My son John scanned the photographic film and with the aid of some image software made the image negative. The result is the picture above.

Wallpaper Videos See the universe come to life via animations, scientific visualizations, expert commentary, and more. Astronomy Well now, this is an interesting discovery: astronomers have found what looks like a "super-Earth" – a planet more massive than Earth but still smaller than a gas giant – orbiting a nearby star at the right distance to have liquid water on it! Given that, it might – might – be Earthlike. This is pretty cool news. We’ve found planets like this before, but not very many! An Animated Video of The Scream - this is Truly Amazing! Wow! This is simply amazing. I can’t put into words how good this video is! Total Solar Eclipse 2012 photos, near Mount Carbine, Queensland, Australia November 14, Queensland, Australia Homepage Astrophotos Australia 2012 photos Purchase Photos! Total Solar Eclipse of November 14, 2012, as seen from a hilltop about 20 miles west of the Outback town of Mount Carbine, Queensland, along the Mulligan Highway (Peninsula Development Road), a road only paved in recent years. Heading inland to get away from coastal showers and clouds which were promising to interfere with the viewing, we drove some 150 miles into the outback to find a good spot the day before and settled upon a remote hillside, up along a dirt track that pulled away from the main road. The location was about 40 miles inland, and 67 miles from Cairns, as the crow flies. About 20 other cars camped out here as well under very dark skies.

The Galaxy Wars! Astronomer's are discovering almost daily that galaxies are voraciously hungry entities, growing by merger and acquisition, Here, a pair of galaxies NGC 1531/2, are engaged in a deadly waltz, located about 70 million light-years away towards the southern constellation Eridanus (The River). The deformed foreground spiral galaxy laced with dust lanes NGC 1532 is so close to its companion — the background galaxy with a bright core just above the centre of NGC 1532 — that it gets distorted: one of its spiral arms is warped and plumes of dust and gas are visible above its disc. The cosmic fandango leads to another dramatic effect: a whole new generation of massive stars were born in NGC 1532 because of the interaction. They are visible as the purple objects in the spiral arms.

The Telescope - Team Hubble Goddard Space Flight Center is home to the Space Telescope Operations Control Center for Hubble. Gathering images from space is more than a "point and shoot" proposition. The Hubble Space Telescope explores our universe 24 hours a day, 365 days a year. Operating and maintaining such a tireless observatory and converting its raw data (digital signals) into images requires considerable effort from the people on the ground. Operating Hubble