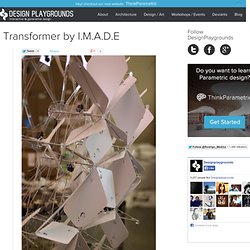 The system acts as an active shading device, potentially for use within a building envelope. The prototyped system is comprised of quad-shaped, polystyrene petals arrayed in overlapping, radial clusters. The petals are situated within a lightweight but rigid and patterned support armature formed from planar polycarbonate and acrylic components while housing matrices of sensors and motors. Local variations in petal movements and aperture size are controlled by simple microcontroller arrays and varying script configurations that interpret light data from photoelectric sensors to drive small servo motors. COMPONENT GEOMETRY: PAVILION IN BARCELONA. Special Projects Responsive Surface. Homeostatic Facade System. Pneumatic Envelope « RAD: Responsive Architecture at Daniels. 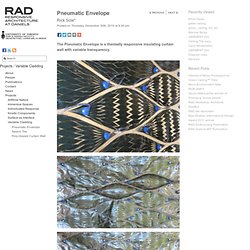 Its structure is cellular. ASE (Adaptive Solar Envelope) Smarter Buildings: USC Architect Doris Sung. Associates - Transformable Design - Adaptive Fritting (GSD) THE STORY OF A KINETIC RAIL STATION.wmv. FireFly Facade. Adaptive Building Initiative - Emergent Surface. Archive » Responsive Skin / Arduino + Grasshopper Firefly. Some weeks ago Andy Payne from Lift Architects announced the release of his first version plugin Firefly which is a specialized set of tools dedicated to bridging the gap between the Arduino interface and Grasshopper , currently the plugin has two components one for receiving data coming from sensors and the other to send parametric data from grasshopper to some sort of actuator via Arduino. 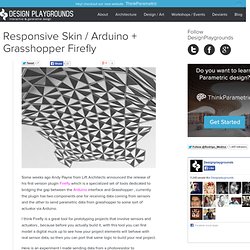 I think Firefly is a great tool for prototyping projects that involve sensors and actuators , because before you actually build it, with this tool you can first model a digital muck up to see how your project elements will behave with real sensor data, so then you can port that same logic to build your real project. Here is an experiment I made sending data from a photoresistor to Grasshopper to create a Responsive Structure that reacts to the degree of light of a physical space in real time.What you need: -Arduino Board -1K Resistor -Photoresistor -LED Arduino Test from Rodrigo Medina on Vimeo. Responsive skin. Photo[synthetic] Pavilion 2. SmartScreen. Kinetic Pavilion – Adapt&Extend » About.