Trek. The radiation zone - Solar energy chain - Solar surface & below - Sun. For waves with a small wavelength, such as gamma rays and X-rays, the photons have a lot of energy. 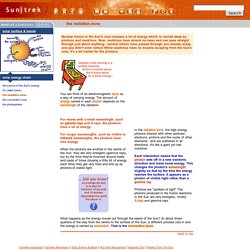 For longer wavelengths, such as visible or infrared wavelengths, the photons have less energy. When the photons are emitted in the centre of the Sun, they are very energetic (gamma rays), but by the time they've bounced around loads and loads of times (loosing a little bit of energy each time) they get very tired and end up as photons of visible light. How Solar Works - Solar Information - Solar Education - Part 1 The Sun. New Solar System documentary The Sun Full HD 1080p, Amazing+ Documentary. Dark Secrets of the Sun - Universe Documentary. Secrets Of The Sun. Fiery Looping Rain on the Sun.

Search. Alessandro Gardini: Personal Interests. NASA/Marshall Solar Physics. Layers of the Sun. Solar scientists have long known that at the heart of the great explosions of solar material that shoot off the sun -- known as coronal mass ejections or CMEs – lies a twisted kink of magnetic fields known as a flux rope. 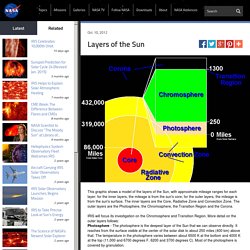 But no one has known when or where they form. Credits: NASA/Goddard Space Flight Center. Solar Learning Activities. 03 Finding the Size of the Sun and Moon - At Home Astronomy. Solar Energy - Nuclear Fusion in the Sun - Simplified Version. Broadcast Yourself. Where Does The Sun Get Its Energy? Nuclear Chemistry Part 2: Fusion and Fission - Crash Course Chemistry #39. Solar Structure. Much like the earth, the Sun has many different layers that define its structure. 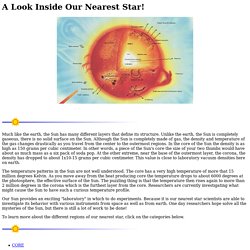 Unlike the earth, the Sun is completely gaseous, there is no solid surface on the Sun. Although the Sun is completely made of gas, the density and temperature of the gas changes drastically as you travel from the center to the outermost regions. In the core of the Sun the density is as high as 150 grams per cubic centimeter. In other words, a piece of the Sun's core the size of your two thumbs would have about as much mass as a six pack of soda pop. Doppler. How do astronomers use light to study stars and planets? › Ask an Expert (ABC Science) I often hear scientists talking about using 'spectroscopy' to study distant stars. 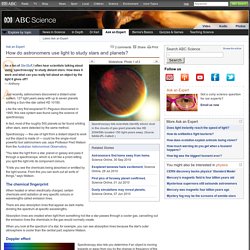 How does it work and what can you really tell about an object by the light it gives off? Just recently, astronomers discovered a distant solar system, 127 light years away with up to seven planets orbiting a Sun-like star called HD 10180. Like the very first exoplanet 51-Pegusus discovered in 1995, this new system was found using the science of spectroscopy. In fact, most of the roughly 500 planets so far found orbiting other stars, were detected by the same method. Spectroscopy — the use of light from a distant object to work out the object is made of — could be the single-most powerful tool astronomers use, says Professor Fred Watson from the Australian Astronomical Observatory. Looking at Starlight. DopplerEffect.pdf. Astronomer's Toolbox. Science. Stellar Spectroscopy Interactive. The Science of Light : Stellar Spectra. When light passes through a prism, it separates into the colors that make it up. 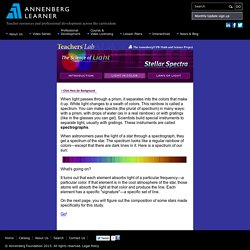 White light changes to a swath of colors. This rainbow is called a spectrum. You can make spectra (the plural of spectrum) in many ways: with a prism, with drops of water (as in a real rainbow), or with gratings (like in the glasses you can get). Scientists build special instruments to separate light, usually with gratings. Making Waves with the Electromagnetic Spectrum. The electromagnetic spectrum describes the range of electromagnetic waves placed in order of increasing frequency. 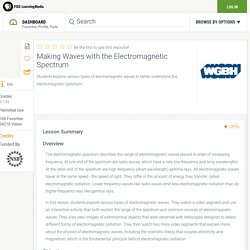 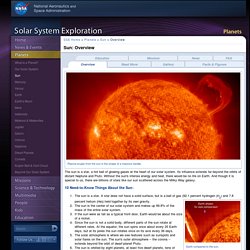 Its influence extends far beyond the orbits of distant Neptune and Pluto. Without the sun's intense energy and heat, there would be no life on Earth. And though it is special to us, there are billions of stars like our sun scattered across the Milky Way galaxy. 10 Need-to-Know Things About the Sun: Solar and Heliospheric Observatory Homepage. Build a Sunspot Viewer. 1. 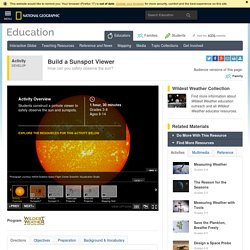