Geolocation - How to get a time zone from a location using latitude and longitude coordinates? Geocoder 1.15.1. Geocoder is a simple and consistent geocoding library. 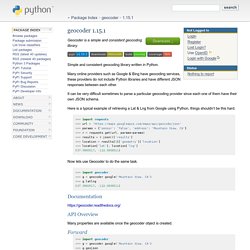 Simple and consistent geocoding library written in Python. Many online providers such as Google & Bing have geocoding services, these providers do not include Python libraries and have different JSON responses between each other. It can be very difficult sometimes to parse a particular geocoding provider since each one of them have their own JSON schema. Here is a typical example of retrieving a Lat & Lng from Google using Python, things shouldn’t be this hard.

Now lets use Geocoder to do the same task. Welcome to GeoPy’s documentation! — GeoPy 1.11.0 documentation. Geopy is a Python 2 and 3 client for several popular geocoding web services. geopy makes it easy for Python developers to locate the coordinates of addresses, cities, countries, and landmarks across the globe using third-party geocoders and other data sources. geopy is tested against CPython 2.7, CPython 3.2, CPython 3.4, PyPy, and PyPy3. 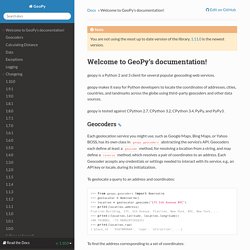 Geocoders¶ Each geolocation service you might use, such as Google Maps, Bing Maps, or Yahoo BOSS, has its own class in geopy.geocoders abstracting the service’s API. Geocoders each define at least a geocode method, for resolving a location from a string, and may define a reverse method, which resolves a pair of coordinates to an address. To geolocate a query to an address and coordinates: To find the address corresponding to a set of coordinates: Locators’ geolocate and reverse methods require the argument query, and also accept at least the argument exactly_one, which is True. 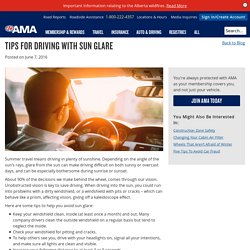 Depending on the angle of the sun’s rays, glare from the sun can make driving difficult on both sunny or overcast days, and can be especially bothersome during sunrise or sunset. About 90% of the decisions we make behind the wheel, comes through our vision. FindMyShadow.com - sun position calculator and bespoke scene shadow plotting - v2.2. Datetime – Date/time value manipulation - Python Module of the Week. Datetime contains functions and classes for working with dates and times, separatley and together. 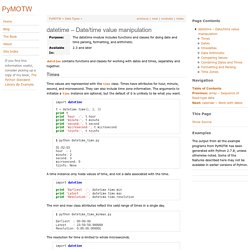 Times Time values are represented with the time class. Times have attributes for hour, minute, second, and microsecond. They can also include time zone information. The arguments to initialize a time instance are optional, but the default of 0 is unlikely to be what you want. Python Tkinter Button. The Button widget is used to add buttons in a Python application.

These buttons can display text or images that convey the purpose of the buttons. You can attach a function or a method to a button which is called automatically when you click the button. Syntax Here is the simple syntax to create this widget − w = Button ( master, option=value, ... ) Parameters master: This represents the parent window.options: Here is the list of most commonly used options for this widget. Methods Following are commonly used methods for this widget − Example Try the following example yourself − Plot and Record Google Map Routes. The PyEphem Tutorial — PyEphem home page. Version 2007.November.1, for PyEphem version 3.7.2.2 and later. 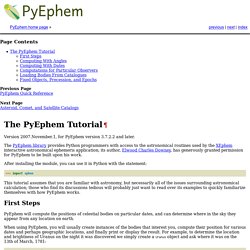 The PyEphem library provides Python programmers with access to the astronomical routines used by the XEphem interactive astronomical ephemeris application; its author, Elwood Charles Downey, has generously granted permission for PyEphem to be built upon his work. After installing the module, you can use it in Python with the statement: This tutorial assumes that you are familiar with astronomy, but necessarily all of the issues surrounding astronomical calculation; those who find its discussions tedious will probably just want to read over its examples to quickly familiarize themselves with how PyEphem works.

First Steps PyEphem will compute the positions of celestial bodies on particular dates, and can determine where in the sky they appear from any location on earth. The code above created and used only one instance of Uranus, but you can also have several going at once. You can even create several instances of the same body. SunPy visualization — SunPy v0.7. Pysolar by pingswept. Sunpos 1.1. Python wrapper for sun position algorithm written in c++ by Blanco-Muriel. 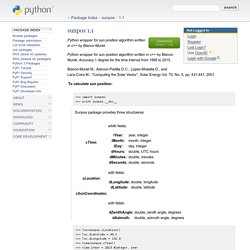 Python wrapper for sun position algorithm written in c++ by Blanco-Muriel. Accuracy 1 degree for the time interval from 1999 to 2015. "sun glare" solutions road. What to Do if Driving Into the Sun. Driving on a beautiful sunny day can provide stunning scenery, but it can also create a hazard if the driver’s view is compromised by a glaring sun. 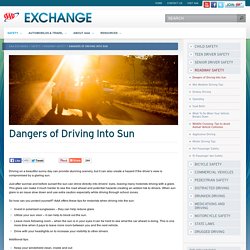 Just after sunrise and before sunset the sun can shine directly into drivers’ eyes, leaving many motorists driving with a glare. This glare can make it much harder to see the road ahead and potential hazards creating an added risk to drivers. When sun glare is an issue slow down and use extra caution especially while driving through school zones. So how can you protect yourself? AAA offers these tips for motorists when driving into the sun: News Story Sun Glare, Deadly Light. A senior citizen, out for a drive with his wife. 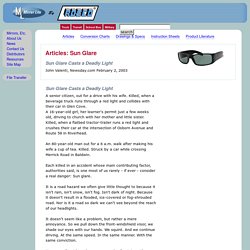 Killed, when a beverage truck runs through a red light and collides with their car in Glen Cove. A 16-year-old girl, her learner's permit just a few weeks old, driving to church with her mother and little sister. Killed, when a flatbed tractor-trailer runs a red light and crushes their car at the intersection of Osborn Avenue and Route 58 in Riverhead. Sun Glare - Bright Sun While Driving. Sun Glare - Bright Sun While Driving.