China Expands High-Speed Rail Network to 30,000km. December 30th, 2016 by James Ayre China is planning to spend 3.5 trillion yuan (~$503 billion) by 2020 on an expansion of its railway system that will see the country’s high-speed rail network grow to 30,000 kilometers (18,650 miles), according to recent reports that follow a State Council Information Office briefing in Beijing. 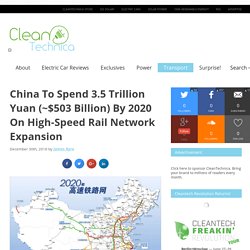 To explain those figures better, the achievement of the plans would see 80% of the major cities in China covered by the new high-speed rail network. Also, 30,000 kilometers is roughly 6.5 times the distance between New York and Los Angeles (when traveled by road). So, in other words, it’s a very substantial high-speed rail network. The plans reportedly have the double intent of bolstering growth and cutting down on road travel and associated air pollution and greenhouse gas emissions, in addition to better linking the country’s urban centers, of course. Bloomberg provides more: Good news for those in China. Self-Driving Cars Debut in Colarado. Right now, you can head over to a local Volvo dealership and test drive a 2017 Volvo S90. 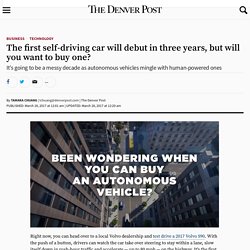 With the push of a button, drivers can watch the car take over steering to stay within a lane, slow itself down in rush-hour traffic and accelerate — up to 80 mph — on the highway. It’s the first Volvo to include the second-generation Pilot Assist as a standard feature. But, even equipped with radar and a 360-degree camera that can distinguish humans from deer, bicyclists and other cars, the $47,000 S90 sedan is not an autonomous vehicle. A driver must be in the seat and frequently touch the steering wheel. Otherwise, the car slows down. Singapore Introduces Driverless Buses. 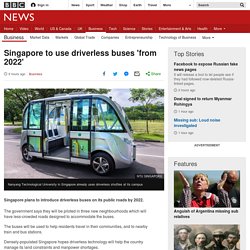 The government says they will be piloted in three new neighbourhoods which will have less-crowded roads designed to accommodate the buses. The buses will be used to help residents travel in their communities, and to nearby train and bus stations. Densely-populated Singapore hopes driverless technology will help the country manage its land constraints and manpower shortages. Japan Introduces Self-Driving Trucks (Drone Deliveries 2 Years Earlier) Rome Bans Diesel Cars from City Centre. Rome, one of Europe’s most traffic-clogged cities and home to thousands of ancient outdoor monuments threatened by pollution, plans to ban diesel cars from the centre by 2024, its mayor has said. 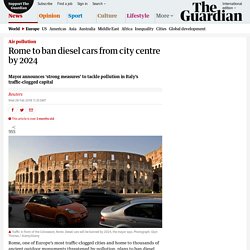 Virginia Raggi announced the decision on her Facebook page on Tuesday, saying: “If we want to intervene seriously, we have to have the courage to adopt strong measures”. Her comments followed a court ruling in Germany that cities there can ban the most heavily polluting diesel cars from their streets. About two-thirds of the 1.8m new cars sold in Italy last year were diesel, according to industry figures. Rome has no major industries, so nearly all of the air pollution in the Italian capital is caused by motor vehicles. The city often tries to ban older, more polluting vehicles from roads on days pollution reaches critical levels. Helsinki's Plan Renders Car Ownership Pointless. The Finnish capital has announced plans to transform its existing public transport network into a comprehensive, point-to-point "mobility on demand" system by 2025 – one that, in theory, would be so good nobody would have any reason to own a car. 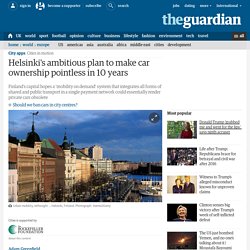 Helsinki aims to transcend conventional public transport by allowing people to purchase mobility in real time, straight from their smartphones. The hope is to furnish riders with an array of options so cheap, flexible and well-coordinated that it becomes competitive with private car ownership not merely on cost, but on convenience and ease of use. Subscribers would specify an origin and a destination, and perhaps a few preferences. The app would then function as both journey planner and universal payment platform, knitting everything from driverless cars and nimble little buses to shared bikes and ferries into a single, supple mesh of mobility. Annual New-Energy Vehicle Sales Reach 7m. Say goodbye to gasoline. 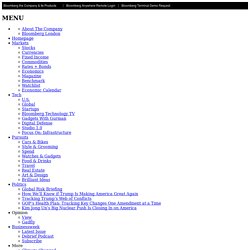 The world's slow drift toward electric cars is about to enter full flood. China, one-third of the world's car market, is working on a timetable to end sales of fossil-fuel-based vehicles, the country's vice minister of industry and information technology, Xin Guobin, told an industry forum in Tianjin on Saturday. That would probably see the country join Norway, France and the U.K. in switching to a wholly electric fleet within the lifetime of most current drivers. The announcement is important because the most influential players in the global auto market have always been not companies, but governments. Diesel cars make up about half of the market in the European Union and less than a percentage point in the U.S., largely because of different fuel-taxation and emissions regimes.

National Policies Generate Demand for 70m EV's/ann. China is considering when to ban the production and sale of petrol and diesel cars. 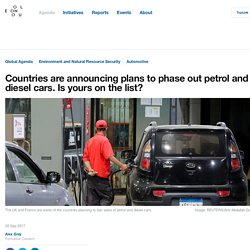 The move is aimed at helping the world's largest car producer and seller to tackle air pollution and boost development of electric and hybrid plug-in vehicles. In a statement released through China’s official news agency, Xinhua, the government said that while no date had been set, it was performing “relevant research” in order to come up with a “timeline”. The news comes hot on the heels of the Scottish government’s announcement that it plans to phase out petrol and diesel cars by 2032. Here are some of the other countries that are gearing up to replace fossil-fuel powered cars. In July, the UK government unveiled plans to halt the production of new petrol and diesel cars from 2040. Michael Gove, the Environment Secretary, warned at the time that Britain "can't carry on" with petrol and diesel cars because of the damage that they cause to people's health and the planet.

Netherlands Bans New Sales of Gas-Powered Cars. Earlier this year, we reported on the Dutch Labour Party’s initiative to instate a ban on new gas and diesel car sales in the Netherlands by 2025. 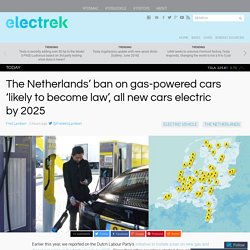 Since then other countries started discussing similar possibilities to phase out gas-powered cars on a comparable timeline. India recently confirmed that it is evaluating a scheme for all its fleet to be electric by 2030 and the Norwegian government is discussing a similar mandate by 2025. Norway Bans New Sales of Gas-Powered Cars. Norway’s four main political parties have been discussing a possible ban on new gasoline-powered car sales (diesel or petrol) for quite some time, but they were not able to come to an understanding until now, according to a new report from Dagens Næringsliv (Paywall), an important newspaper in Norway. 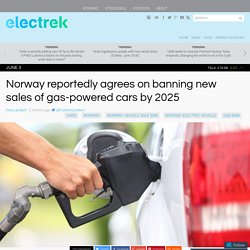 The four main political parties, both from the right and the left, have agreed on a new energy policy that will include a ban on new gasoline-powered car sales as soon as 2025 – making it one of the most aggressive timeline of its kind for such a policy. What’s probably most remarkable here is that Norway is currently one of the world’s largest Oil exporters. China Hits Target of 20% Alternate Fuel Vehicles of 35m Annual Sales. China's Hainan Province Ends Fossil Fuel Car Sales. BEIJING (AFP) - China's southern Hainan island will end sales of fossil fuel-only cars in 2030, officials said, becoming the first province to announce a target end date for a transition away from gas guzzlers. 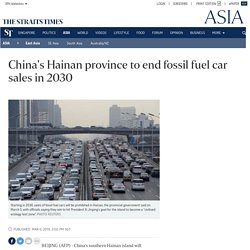 Beijing announced plans in 2017 to phase out petrol vehicles across the nation, but it did not set a date, as the country aims to cut pollution and reduce its dependence on imported oil. Germany Mandates All New Cars Must Be Electric. Hammer, dropped. Dismayed that CO2 emissions from motor transport have not dropped in the country since 1990, Germany is taking what some will consider an extreme measure. Others will think it’s about time. As of 2030, all new cars registered in Germany must be emissions free, according to The Globe and Mail. 30% of India's Transport Electric. Prime Minister Narendra Modi said India plans to come up with a stable policy soon for electric vehicles and alternative fuel-driven transport.

“Policies will be designed as a win-win for all who wants opportunities in the automobile sector,” Modi said at Global Mobility Summit in New Delhi today. Public transport, he said, will remain the focus of the electric mobility push. Charged mobility is the way forward for India, Modi said, adding that the nation wants to drive investments across the value chain from batteries to smart charging to electric vehicle manufacturing. India's New Cars 100% EV. NEW DELHI: India is looking at having an all-electric car fleet by 2030 with an express objective of lowering the fuel import bill and running cost of vehicles. "We are going to introduce electric vehicles in a very big way. We are going to make electric vehicles self- sufficient like UJALA. The idea is that by 2030, not a single petrol or diesel car should be sold in the country," Power minister Piyush Goyal said while addressing the CII Annual Session 2017. IEA Achieves Goal of 100 Million EVs Worldwide.

IEA targets 100 million electric cars by 2030 The International Energy Agency (IEA) is targeting 100 million electric cars on the roads by 2030 in order to avoid potentially damaging global warming. Paris Phases Out All Non-Electric Cars. In Brief Parisian officials have announced plans to completely phase out usage of fossil fuel-powered cars by 2030. The entire nation will follow with its own restriction in 2040. The Future of Fuel. Scotland Phases Out Petrol & Diesel Cars. They choke our cities and cause massive environmental damage. All New Cars Sold in B.C. are Zero-Emission. France Bans Sales of ICE Cars. France will end sales of petrol and diesel vehicles by 2040 as part of an ambitious plan to meet its targets under the Paris climate accord, Emmanuel Macron’s government has announced. The announcement comes a day after Volvo said it would only make fully electric or hybrid cars from 2019 onwards, a decision hailed as the beginning of the end for the internal combustion engine’s dominance of motor transport after more than a century.

New York City Bus Fleet All-Electric. UK's Petrol & Diesel Car Ban Implemented. EVs Account for More Than 50% of New Cars. Tesla knows it. Volvo knows it. Hell, most of the automotive industry knows it. At this point, electric cars are inevitable. But how quickly will they usurp our current gas guzzlers? Swedish Shipping Industry Goes Fossil-Free.