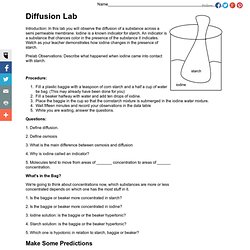 Iodine is a known indicator for starch. An indicator is a substance that chances color in the presence of the substance it indicates. Watch as your teacher demonstrates how iodine changes in the presence of starch. Prelab Observations: Describe what happened when iodine came into contact with starch. Procedure: Fill a plastic baggie with a teaspoon of corn starch and a half a cup of water tie bag. Questions: 1. 2. 3. 4. 5. What's in the Bag? We're going to think about concentrations now, which substances are more or less concentrated depends on which one has the most stuff in it. Osmosis Demystified — How It Works. ©2003 Darel Rex Finley. 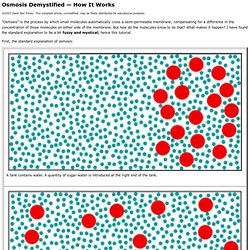 This complete article, unmodified, may be freely distributed for educational purposes. “Osmosis” is the process by which small molecules automatically cross a semi-permeable membrane, compensating for a difference in the concentration of those molecules on either side of the membrane. But how do the molecules know to do that? What makes it happen? I have found the standard explanation to be a bit fuzzy and mystical; hence this tutorial. First, the standard explanation of osmosis: Sounds good, doesn’t it? First, A. And, B. Obviously, another explanation is required. Mystery solved — osmosis explained entirely by random movements of molecules, without reference to mysterious “tendencies” to cross gradients! Reverse Osmosis: What is “reverse osmosis?” UPDATE 2008.10.05 — Over the past year or two, a few persons have e-mailed me to suggest that this explanation may not apply to the case of a rigid membrane, and I have to agree that it doesn’t. 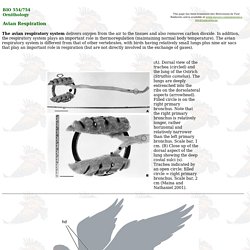 In addition, the respiratory system plays an important role in thermoregulation (maintaining normal body temperature). The avian respiratory system is different from that of other vertebrates, with birds having relatively small lungs plus nine air sacs that play an important role in respiration (but are not directly involved in the exchange of gases). Avian respiratory system (hd = humeral diverticulum of the clavicular air sac; adapted from Sereno et al. 2008) The air sacs permit a unidirectional flow of air through the lungs. Unidirectional flow means that air moving through bird lungs is largely 'fresh' air & has a higher oxygen content. Pulmonary air-sac system of a Common Teal (Anas crecca). a. Animated gif created by Eleanor Lutz (Eleanor's website: Some hollow bones are providing solid new evidence of how birds evolved from dinosaurs. Sandhill Cranes calling in flight Maina, J. Membrane Transport Animation. Bioinspired Water Filtration Makes Nearly Anything Drinkable.

In the break room of a South Boston research center, a gleaming fish tank stands next to shelves of Cheez-It crackers. 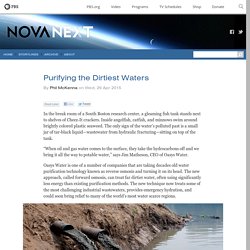 Inside angelfish, catfish, and minnows swim around brightly colored plastic seaweed. The only sign of the water’s polluted past is a small jar of tar-black liquid—wastewater from hydraulic fracturing—sitting on top of the tank. “When oil and gas water comes to the surface, they take the hydrocarbons off and we bring it all the way to potable water,” says Jim Matheson, CEO of Oasys Water. Oasys Water is one of a number of companies that are taking decades old water purification technology known as reverse osmosis and turning it on its head. The new approach, called forward osmosis, can treat far dirtier water, often using significantly less energy than existing purification methods. Where traditional water filtration may choke on polluted waters like this, forward osmosis can make it potable. This is where forward osmosis comes in. The Draw Finding a Focus Zero Waste.