Carsharing. Zipcar is the largest carsharing network in the world, with more than 767,000 members by December 2012. 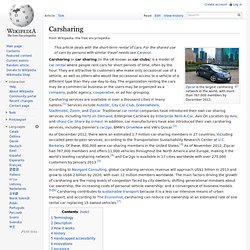 This article deals with the short-term rental of cars. For the shared use of cars by persons with similar travel needs see Carpool. Carsharing or car sharing (in the UK known as car clubs) is a model of car rental where people rent cars for short periods of time, often by the hour. They are attractive to customers who make only occasional use of a vehicle, as well as others who would like occasional access to a vehicle of a different type than they use day-to-day. The organization renting the cars may be a commercial business or the users may be organized as a company, public agency, cooperative, or ad hoc grouping. As of December 2012[update], there were an estimated 1.7 million car-sharing members in 27 countries, including so-called peer-to-peer services, according to the Transportation Sustainability Research Center at U.C. Road transport. Disruptions in organized traffic flow can create delays lasting hours. 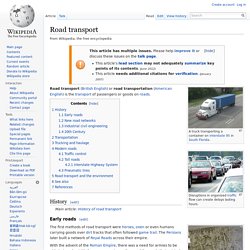 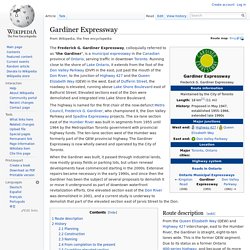 This is the former QEW segment. Due to its status as a former Ontario 400-series highway, and because of its more recent design (rebuilt in the late 1960s), this section was built to more recent standards than the Metro-constructed Gardiner. A system of collector and express lanes serves Kipling Avenue and Islington Avenue and this segment has a speed limit of 100 km/h rather than 90 km/h. From the 427 to Grand Avenue the highway passes through an area of residential, commercial and light industry. Electronic Road Pricing. ERP gantry at North Bridge Road. 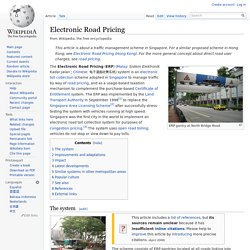 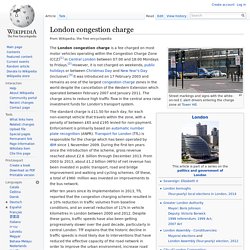 The London congestion charge is a fee charged on most motor vehicles operating within the Congestion Charge Zone (CCZ)[1] in Central London between 07:00 and 18:00 Mondays to Fridays.[2] However, it is not charged on weekends, public holidays or between Christmas Day and New Year's Day (inclusive).[3] It was introduced on 17 February 2003 and remains as one of the largest congestion charge zones in the world despite the cancellation of the Western Extension which operated between February 2007 and January 2011.

The charge aims to reduce high traffic flow in the central area raise investment funds for London's transport system. The standard charge is £11.50 for each day, for each non-exempt vehicle that travels within the zone, with a penalty of between £65 and £195 levied for non-payment. Stockholm congestion tax. The Stockholm congestion tax (Swedish: Trängselskatt i Stockholm), also referred to as the Stockholm congestion charge, is a congestion pricing system implemented as a tax levied on most vehicles entering and exiting central Stockholm, Sweden.[1] The congestion tax was implemented on a permanent basis on August 1, 2007,[2][3] after a seven-month trial period between January 3, 2006 and July 31, 2006.[4] The primary purpose of the congestion tax is to reduce traffic congestion and improve the environmental situation in central Stockholm.[4] The funds collected will be used for new road constructions in and around Stockholm.[5] A referendum was held in September 2006 a couple months after the end of the trial period. 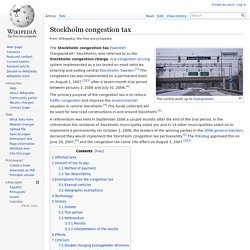 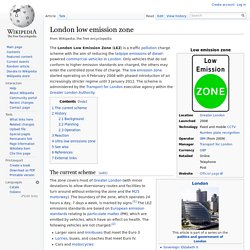 Only vehicles that do not conform to higher emission standards are charged, the others may enter the controlled zone free of charge. The low emission zone started operating on 4 February 2008 with phased introduction of an increasingly stricter regime until 3 January 2012. Ecopass. Ecopass traffic sign delimiting restricted area. 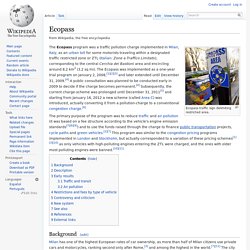 The Ecopass program was a traffic pollution charge implemented in Milan, Italy, as an urban toll for some motorists traveling within a designated traffic restricted zone or ZTL (Italian: Zone a Traffico Limitato), corresponding to the central Cerchia dei Bastioni area and encircling around 8.2 km2 (3.2 sq mi). The Ecopass was implemented as a one-year trial program on January 2, 2008,[1][2][3] and later extended until December 31, 2009.[4] A public consultation was planned to be conducted early in 2009 to decide if the charge becomes permanent.[4] Subsequently, the current charge-scheme was prolonged until December 31, 2011[5] and starting from January 16, 2012 a new scheme (called Area C) was introduced, actually converting it from a pollution-charge to a conventional congestion charge.[6] Background[edit] 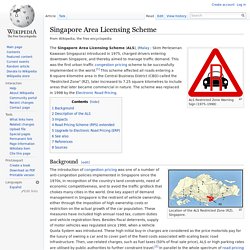 This was the first urban traffic congestion pricing scheme to be successfully implemented in the world.[1] This scheme affected all roads entering a 6-square-kilometre area in the Central Business District (CBD) called the "Restricted Zone" (RZ), later increased to 7.25 square kilometres to include areas that later became commercial in nature.

The scheme was replaced in 1998 by the Electronic Road Pricing. Background[edit] Location of the ALS Restricted Zone (RZ), Singapore. The ALS was first formulated and designed in 1973, under the leadership of a high level inter-ministerial committee, which recommended policies and measures to improve the urban transport situation back then. Transportation demand management. Evening traffic on the A1 freeway in Slovenia. 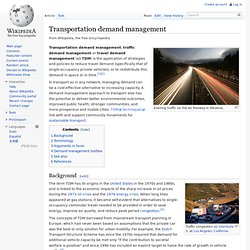 Transportation demand management, traffic demand management or travel demand management (all TDM) is the application of strategies and policies to reduce travel demand (specifically that of single-occupancy private vehicles), or to redistribute this demand in space or in time.[1][2] In transport as in any network, managing demand can be a cost-effective alternative to increasing capacity. A demand management approach to transport also has the potential to deliver better environmental outcomes, improved public health, stronger communities, and more prosperous and livable cities.

Congestion pricing. For the broader concept of direct charges paid by road users, see road pricing. Electronic Road Pricing gantry in Singapore, the first city in the world to implement an urban cordon area congestion pricing scheme. Implementation of congestion pricing has reduced congestion in urban areas, but has also sparked criticism and public discontent. Critics maintain that congestion pricing is not equitable, places an economic burden on neighboring communities, has a negative effect on retail businesses and on economic activity in general, and represents another tax levy.

It is 41 kilometres (25 mi) long and will run to the north and west of the city. It will connect the Warrego Highway (in the east) at Helidon with the Warrego Highway (in the west) at Charlton and the Gore Highway at Athol. It aims to provide a second highway crossing of the Great Dividing Range as well as a bypass or partial ring road around the urban area of Toowoomba.[1] Queensland Treasury estimated that the project cost would be $1.7 billion, creating 1,800 jobs over the 3 year construction period.[1] Towoomba second range crossing. Nsw westconnex tunnel. Sydney gateway infrastructure project. Westlink M7. "Metroad 7" redirects here. For the non-motorway section of the former Metroad 7 in Sydney, see Cumberland Highway. Westlink M7 - formerly Western Sydney Orbital - is one of Sydney, Australia's urban motorways and a part of the Sydney Orbital Network. It is a tolled motorway that is operated by Transurban and connects three motorways: M5 South Western Motorway at Prestons, M4 Western Motorway at Eastern Creek and M2 Hills Motorway at Baulkham Hills.

It opened on 16 December 2005, eight months ahead of schedule. History[edit] Lane Cove Tunnel. Cross City Tunnel. Cross City Tunnel entrance, Harbour Street, Sydney, New South Wales (2010-10-16) 01 In early 2002, a year before construction began, transport planner Michelle Zeibots was quoted in local newspapers saying the tunnel would not reach its traffic targets.[1] In December 2006 the tollway became insolvent due to low traffic volumes, accumulating debts of over A$500 million. On 20 June 2007, Leighton Contractors and investment bank ABN AMRO were chosen as preferred purchasers of the Cross City Tunnel Group for $700 million.[2] It is privately owned and operated, but will revert to public ownership in 2035. Sydney Orbital Network. Rail trail. A "rail with trail" in the United States; train at right A rail trail is the conversion of a disused railway into a multi-use path, typically for walking, cycling and sometimes horse riding.