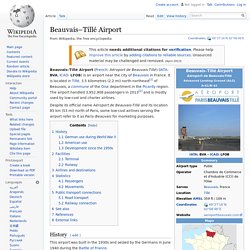 History[edit] This airport was built in the 1930s and seized by the Germans in June 1940 during the Battle of France. German use during World War II[edit] Beauvais was used as a Luftwaffe military airfield during the occupation. Known units assigned (all from Luftflotte 3, Fliegerkorps IV):[3][4] Kampfgeschwader 76 (KG 76) June – 24 October 1940 Dornier Do 17Z-2 (Fuselage Code: F1+)Sturzkampfgeschwader 1 (SKG 1) July 1940 Junkers Ju 87B Stuka The initial German use of the airport was as a bomber base. kg 76 and SKG 1 both took part in the Battle of Britain. kg 76 was reduced to 19 out of 29 serviceable machines by 18 August 1940. kg 76 raided London on 7 and 15 September 1940. American use[edit] It was liberated by Allied ground forces about 3 September 1944 during the Northern France Campaign. 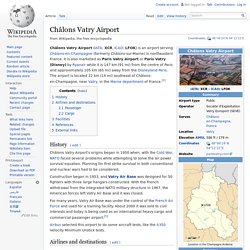 Planning for first strike survival in both conventional and nuclear wars had to be considered. Construction began in 1953, and Vatry Air Base was designed for 50 fighters with three large hangars constructed. With the French withdrawal from the integrated NATO military structure in 1967, the American forces left Vatry Air Base and it was closed. For many years, Vatry Air Base was under the control of the French Air Force and used for a training facility. Airbus selected this airport to do some aircraft tests, like the A350 Velocity Minimum Unstick tests. Paris–Le Bourget Airport. Paris–Le Bourget Airport (French: Aéroport de Paris-Le Bourget) (IATA: LBG, ICAO: LFPB) is an airport located within portions of the communes of Le Bourget, Bonneuil-en-France, Dugny and Gonesse, 6 NM (11 km; 6.9 mi) north-northeast[2] (NNE) of Paris, France. 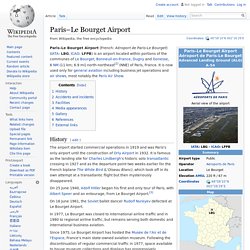 It is now used only for general aviation including business jet operations and air shows, most notably the Paris Air Show. History[edit] Orly Airport. For the World War I and NATO military use of this facility, see Orly Air Base. 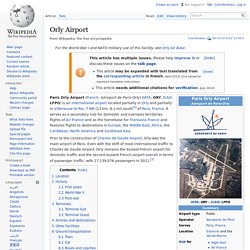 Paris Orly Airport (French: Aéroport de Paris-Orly) (IATA: ORY, ICAO: LFPO) is an international airport located partially in Orly and partially in Villeneuve-le-Roi, 7 NM (13 km; 8.1 mi) south[2] of Paris, France. It serves as a secondary hub for domestic and overseas territories flights of Air France and as the homebase for Transavia France and features flights to destinations in Europe, the Middle East, Africa, the Caribbean, North America and Southeast Asia. Etihad Airways. The airline operates more than 1,000 flights per week to over 120 passenger and cargo destinations in the Middle East, Africa, Europe, Asia, Australia and the Americas, with a fleet of 119 Airbus and Boeing aircraft as of August 2015. 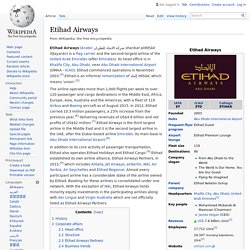 In 2012, Etihad carried 10.3 million passengers, a 23% increase from the previous year,[6] delivering revenues of US$4.8 billion and net profits of US$42 million.[7] Etihad Airways is the third largest airline in the Middle East and it is the second largest airline in the UAE, after the Dubai-based airline Emirates. Its main base is Abu Dhabi International Airport.[8] History[edit] Etihad Airways was established as the second flag carrier of the United Arab Emirates in July 2003 by Royal (Amiri) Decree issued by Sheikh Khalifa bin Zayed Al Nahyan.

Emirates. From Wikipedia, the free encyclopedia. 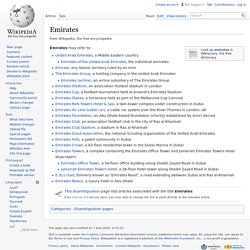 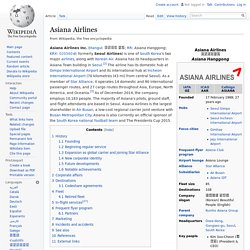 (Hangul: 아시아나 항공; RR: Asiana Hanggong; KRX: 020560; formerly Seoul Airlines) is one of South Korea's two major airlines, along with Korean Air. Asiana has its headquarters in Asiana Town building in Seoul.[2] The airline has its domestic hub at Gimpo International Airport and its international hub at Incheon International Airport (70 kilometres (43 mi) from central Seoul). As a member of Star Alliance, it operates 14 domestic and 90 international passenger routes, and 27 cargo routes throughout Asia, Europe, North America, and Oceania.[3] As of December 2014, the company employs 10,183 people. The majority of Asiana's pilots, ground staff, and flight attendants are based in Seoul. American Airlines. American Airlines, Inc. 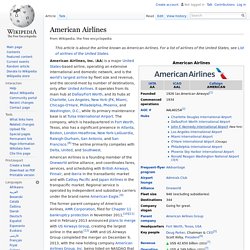 (AA) is a major United States-based airline, operating an extensive international and domestic network, and is the world's largest airline by fleet size and revenue, and the second-most by number of destinations, only after United Airlines. It operates from its main hub at Dallas/Fort Worth, and its hubs at Charlotte, Los Angeles, New York-JFK, Miami, Chicago-O'Hare, Philadelphia, Phoenix, and Washington, D.C., while its primary maintenance base is at Tulsa International Airport. The company, which is headquartered in Fort Worth, Texas, also has a significant presence in Atlanta, Boston, London-Heathrow, New York-LaGuardia, Raleigh-Durham, San Antonio, and San Francisco.[8] The airline primarily competes with Delta, United, and Southwest.

History[edit] Predecessors[edit] American Airlines has merged with several carriers since its formation in 1930 (which itself happened by a merger of 80 carriers). Early history[edit] 1927 American Airways FC-2. Air Canada. Air Canada (TSX: AC) is the flag carrier and largest airline of Canada. 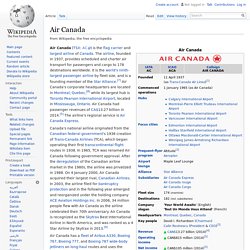 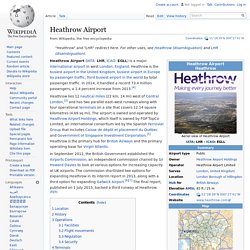 It is the fifth busiest airport in Europe in terms of passengers. The airport is built as one large terminal (a single-terminal concept), split into three large departure halls. Schiphol is the hub for KLM and its regional affiliate KLM Cityhopper as well as for Corendon Dutch Airlines, Martinair Cargo, Transavia and TUI Airlines Netherlands. The airport also serves as a European hub for Delta Air Lines and as a base for EasyJet and Vueling. Schiphol opened on 16 September 1916 as a military airbase. Description[edit] Adelaide Airport. Adelaide Airport (IATA: ADL, ICAO: YPAD) is the principal airport of Adelaide, South Australia and the fifth busiest airport in Australia, servicing 7,696,000 passengers in the financial year ending 30 June 2014.[1] Located adjacent to West Beach, it is approximately 6 km (3.7 mi) west of the city-centre.

It has been operated privately by Adelaide Airport Limited under a long-term lease from the Commonwealth Government since 29 May 1998.[2]:p 25. Delta Air Lines. Delta Air Lines, Inc. ("Delta"; NYSE: DAL) is a major American airline, with its headquarters and largest hub at Hartsfield–Jackson Atlanta International Airport in Atlanta, Georgia.[11] The airline along with its subsidiaries operate over 5,400 flights daily and serve an extensive domestic and international network that includes 334 destinations in 64 countries on six continents, as of June 2015.[5] Delta is one of the four founding members of the SkyTeam airline alliance, and operates joint ventures with: Air France-KLM and Alitalia; Virgin Atlantic; and Virgin Australia.[5] Regional service is operated under the brand name Delta Connection.

Delta is the sixth-oldest operating airline by foundation date, and the oldest airline still operating in the United States. The company's history can be traced back to Huff Daland Dusters, founded in 1924 in Macon, Georgia as a crop dusting operation. History Restored Huff-Daland Duster Predecessors Defunct Delta subsidiaries. KLM. KLM, legally Koninklijke Luchtvaart Maatschappij N.V. (Royal Dutch Airlines), is the flag carrier airline of the Netherlands.[4] It is headquartered in Amstelveen, with its hub at nearby Amsterdam Airport Schiphol. KLM was founded in 1919; it is the oldest airline in the world still operating under its original name and had 32,505 employees as of 2013[update].[5] KLM operates scheduled passenger and cargo services to approximately 130 destinations.

Passenger aircraft are configured in a three-class layout, including business class, Economy Comfort, and economy class. KLM has a reputation as one of the world's safest airlines, and has a large social media presence. Amsterdam Airport Schiphol. KLM Cityhopper. KLM Cityhopper is the regional subsidiary of KLM Royal Dutch Airlines (part of the Air France-KLM group). The airline's head office, the Convair Building, is on the grounds of Amsterdam Airport Schiphol in Schiphol-Oost, Haarlemmermeer. It operates short haul services in Europe on behalf of its parent company, KLM. Therefore, the ICAO code 'KLM' is used by air traffic control and the IATA code 'KL' are used on tickets and flight information displays et cetera.

Flights are scheduled to approximately 44 destinations, but this can vary on the time of year, and the carrier takes up differing routes when directed to do so by its parent company KLM. Air France–KLM. Air France–KLM is a Franco-Dutch airline holding company incorporated under French law with its headquarters at Charles de Gaulle Airport in Tremblay-en-France, near Paris. The group has offices in Montreuil, Seine-Saint-Denis, Paris, and in Amstelveen, Netherlands.[4][5] Air France–KLM is the result of the merger in 2004 between Air France and KLM.

In 2008, it was the largest airline company in the world in terms of total operating revenues, and also the largest in the world in terms of international passenger-kilometres. The company's CEO since 17 October 2011 is Jean-Cyril Spinetta.[1] Both Air France and KLM are members of the SkyTeam airline alliance. Air France–KLM Airlines transported 87.3 million passengers in 2014. Nice Côte d'Azur Airport. Lyon–Saint-Exupéry Airport. Marseille Provence Airport. Marseille Provence Airport or Aéroport de Marseille Provence (IATA: MRS, ICAO: LFML) is an airport located 27 km (17 miles) northwest of Marseille,[2] on the territory of Marignane, both communes of the Bouches-du-Rhône département in the Provence-Alpes-Côte d'Azur région of France. The airport's hinterland goes from Gap to Arles and from Toulon to Avignon.

Orly Airport. Air France. Auckland Airport. Charles de Gaulle Airport. Brisbane Airport. Cairo International Airport. Cairo International Airport (IATA: CAI, ICAO: HECA) (Arabic: مطار القاهرة الدولي‎; Maṭār al-Qāhirah al-Duwaliyy) is the international airport of Cairo and the busiest in Egypt and serves as the primary hub for EgyptAir and EgyptAir Express as well as several other airlines. The airport is located to the northeast of the city around 15 kilometres (9.3 mi) from the business area of the city and has an area of approximately 37 square kilometres (14 sq mi).