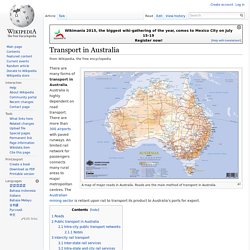 A new way to stop the gridlock in the skies. 5 February 2015Last updated at 19:03 ET By Richard Westcott BBC Transport Correspondent British air traffic controllers have invented a new system that could eventually cut flight delays all over the world. 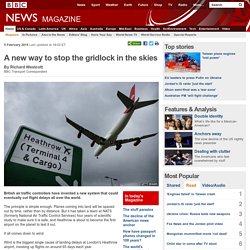 The principle is simple enough. Port Kembla, New South Wales. History[edit] Before Port Kembla was an industrial suburb of Wollongong, it was a town with a remarkably self-sufficient society, a growing commercial centre, and a vibrant civic life. 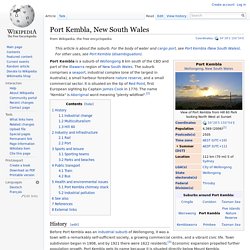 Town subdivision began in 1908, and by 1921 there were 1622 residents.[3] Economic expansion propelled further population growth. Port Kembla gets its name because it is situated directly below Mount Kembla. Industrial change[edit] A new copper smelter and refinery, the Electrolytic Refinery and Smelting Company of Australia, began production in 1908, followed by the opening of Metal Manufactures in 1917 and finally the arrival of the Hoskins Iron and Steel Works in 1927, which became Australian Iron and Steel in 1928. Multiculturalism[edit] Despite the decline from the heyday of the 1920s, the town experienced major social and demographic change in the 1950s and 1960s.

Freight terminal will cut thousands of truck trips. An artist's impression of the proposed freight hub … trucks will unload cargo onto trains at Moorebank for transport to Port Botany. 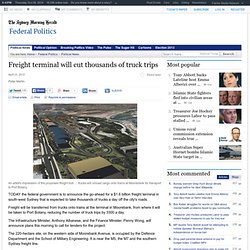 TODAY the federal government is to announce the go-ahead for a $1.6 billion freight terminal in south-west Sydney that is expected to take thousands of trucks a day off the city's roads. Freight will be transferred from trucks onto trains at the terminal in Moorebank, from where it will be taken to Port Botany, reducing the number of truck trips by 3300 a day. The Infrastructure Minister, Anthony Albanese, and the Finance Minister, Penny Wong, will announce plans this morning to call for tenders for the project. Culture - The 10 most beautiful airports in the world. Most airports are purely functional, but these are architectural wonders. 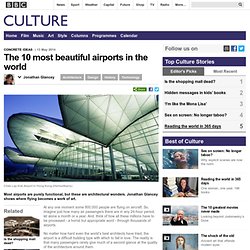 Jonathan Glancey shows where flying becomes a work of art. At any one moment some 800,000 people are flying on aircraft. Culture - World’s most beautiful Metro stations. Opal card. Adult Opal card History[edit] Previous systems[edit] A unified brand for the majority of public transport tickets was introduced in April 2010. 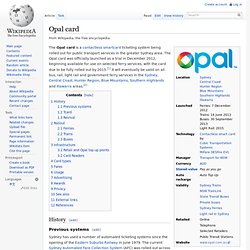 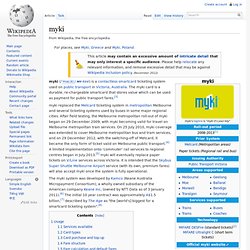 After field testing, the Melbourne metropolitan roll-out of myki began on 29 December 2009, with myki becoming valid for travel on Melbourne metropolitan train services. On 25 July 2010, myki coverage was extended to cover Melbourne metropolitan bus and tram services, and on 29 December 2012, with the switching-off of Metcard, it became the only form of ticket valid on Melbourne public transport.[4] A limited implementation onto 'commuter' rail services to regional centres began in July 2013.[5] myki will eventually replace paper tickets on V/Line services across Victoria. It is intended that the Skybus Super Shuttle Melbourne Airport service (with its own, premium fares) will also accept myki once the system is fully operational.

Usage[edit] SmartRider. A typical SmartRider smart card The system is used widely across the Transperth public transport network in metropolitan Perth, as well as the regional town bus services TransAlbany, TransBunbury, TransBusselton, TransGeraldton and TransGoldfields in Western Australian regional centres.[2] Smartrider is not used for ticketing on Transwa train and coach services or on Canarvon or Port Hedland town bus services, but can be recognised as proof of entitlement to concession fares.[2] The SmartRider is a credit card-sized smartcard incorporating a microchip and internal aerial, allowing the smartcard to communicate with processors located at Transperth railway stations, on Transperth ferries and on Transperth and regional town bus services. 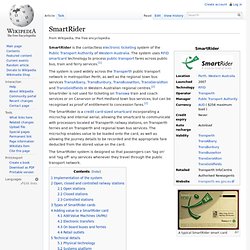 The microchip enables value to be loaded onto the card, as well as allowing the journey details to be recorded and the appropriate fare deducted from the stored value on the card. Broken Hill Airport. Broken Hill Airport (IATA: BHQ, ICAO: YBHI) is an airport located 2.5 nautical miles (4.6 km; 2.9 mi) southeast[2] of Broken Hill, New South Wales, Australia. 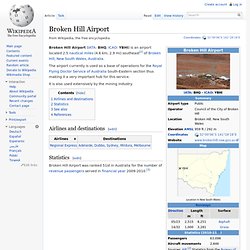 The airport currently is used as a base of operations for the Royal Flying Doctor Service of Australia South-Eastern section thus making it a very important hub for this service. It is also used extensively by the mining industry. Airlines and destinations[edit] Statistics[edit] Broken Hill Airport was ranked 51st in Australia for the number of revenue passengers served in financial year 2009-2010.[3] 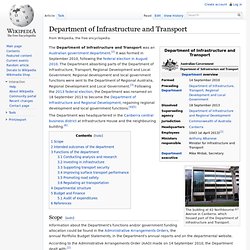 UK ‘growth fund’ supports rail projects. Photo: Tupungato / Shutterstock.com. Manchester Metrolink is one of several transport infrastructure projects to benefit from a new £12 billion growth fund set up by the UK government. Britain’s Prime Minister, David Cameron, and Deputy Prime Minister, Nick Clegg, announced the allocation of funds to a number of initiatives and infrastructure projects earlier this week. Metrolink will receive £18 million as part of a £50 million ‘transport package’, which includes 12 new trams and a programme of station improvements. Birmingham is also set to gain, with the fund supporting HS2′s presence in the city, particularly the possible connection to Birmingham Curzon Street station.

Global Rail News. Nonstop High-Speed Trains Enabled by Docking Trams [VIDEOS] No matter how fast a high-speed train travels, it still has to slow down to 0 mph to pick up additional passengers. That problem has been solved by a designer who dreamed up a way for high-speed local trams to catch up to those speedster trains, picking up and dropping off passengers without requiring the express train to stop. Designer Paul Priestman of UK-based Priestmangoode puts it succinctly in the video below: “Moving platforms is a new concept to allow people to travel from their street to another street in another city in another country by train without stopping.” If you think about it, this is a problem that needed to be solved long ago. You’ve probably noticed that trains (and buses, too) waste a lot of time slowing down, pulling into stations, waiting to pick up and drop off passengers, and then speeding back up again.

List of airports. List of airports From Wikipedia, the free encyclopedia. List of defunct airlines. List of airlines. List of aircraft manufacturers. This is a list of aircraft manufacturers sorted alphabetically by International Civil Aviation Organization (ICAO)/common name. It contains the ICAO/common name, manufacturers name(s), country and other data, with the known years of operation in parentheses. French firm wins 7-year Docklands Light Railway franchise. Category:Public transport in Australia. Public transport in Sydney. Category:Transport infrastructure in Australia. Category:Tunnels in Australia. Category:Tunnels in New South Wales. Plug-in electric vehicle. A plug-in electric vehicle (PEV) is any motor vehicle that can be recharged from any external source of electricity, such as wall sockets, and the electricity stored in the rechargeable battery packs drives or contributes to drive the wheels. Electric cars 'to cost more to run than petrol vehicles' The leader in personal, green transportation.