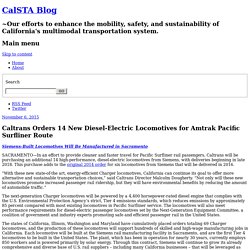 This purchase adds to the original 2014 order for six locomotives from Siemens that will be delivered in 2016. “With these new state-of-the art, energy-efficient Charger locomotives, California can continue its goal to offer more alternative and sustainable transportation choices,” said Caltrans Director Malcolm Dougherty. “Not only will these new locomotives promote increased passenger rail ridership, but they will have environmental benefits by reducing the amount of automobile traffic.” The next-generation Charger locomotives will be powered by a 4,400 horsepower-rated diesel engine that complies with the U.S. Hanover Stadtbahn. Cologne Stadtbahn. 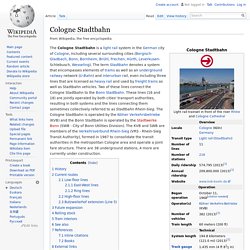 The city center was almost completely destroyed and the tram lines with it. After the war, only a few of the existing lines were rebuilt in the downtown area, while at the same time automobile traffic increased heavily. To improve the situation, construction of the first tunnel began in 1963. When the tunnel was opened in November 1968, it was integrated into the tram network, instead of a separate subway operation. Underground construction in downtown Cologne, one of Germany's oldest cities, is often obstructed by archeologists' legal rights to dig in all future building sites within the medieval city limits before all heavy construction machinery. Essen Stadtbahn. The Essen Stadtbahn (German: Stadtbahn Essen) is a 19.6-kilometer (12.2 mi)[1] light rail (Stadtbahn) network in Essen and the two neighbouring cities of Mülheim an der Ruhr and Gelsenkirchen in the German state of North Rhine Westphalia. 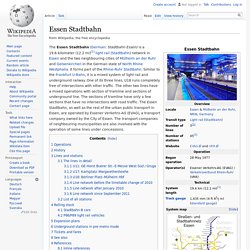 It forms part of the Rhine-Ruhr Stadtbahn. Similar to the Frankfurt U-Bahn, it is a mixed system of light rail and underground railway. One of its three lines, U18 runs completely free of intersections with other traffic. The other two lines have a mixed operations with section of tramline and sections of underground line. The sections of tramline have only a few sections that have no intersections with road traffic.

Trams in Europe. Europe has an extensive number of tramway networks. 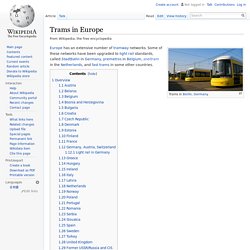 Some of these networks have been upgraded to light rail standards, called Stadtbahn in Germany, premetros in Belgium, sneltram in the Netherlands, and fast trams in some other countries. Overview[edit] All the former communist countries of Central and Eastern Europe, excluding Lithuania, the Republic of Macedonia, Montenegro, Moldova and Slovenia, have extensive tram infrastructure. Industrial freight use of city tram lines was a widespread practice until the 1960s but has since mostly disappeared.

Another factor is an increasing replacement of trams with trolleybuses as cities face a rapid increase in traffic and such replacement often allows to increase road size. In recent decades, tram networks in countries including Britain, Ireland, France, Germany, Spain and Portugal have grown considerably. List of tram and light rail transit systems. The following is a list of cities that have current tram/streetcar, heritage tram/heritage streetcar, or light rail systems as part of their regular public transit systems.[1] In other words, this list only includes systems which operate year-round and provide actual transit service, not ones that are primarily tourist services, are seasonal-only, or are excursion-type tram operations. 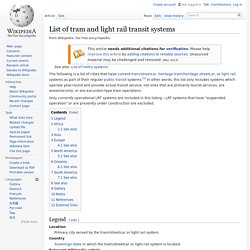 Only currently operational LRT systems are included in this listing – LRT systems that have "suspended operation" or are presently under construction are excluded. Legend[edit] Location Primary city served by the tram/streetcar or light rail system. Country. Light rail. Los Angeles's mass transit expansion has been driven in large part by light rail Light rail or light rail transit (LRT) is urban public transport using rolling stock similar to a tramway, but operating at a higher capacity, and often on an exclusive right-of-way. 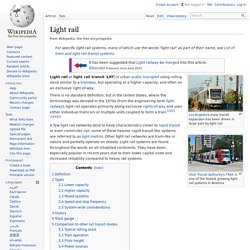 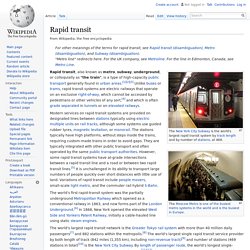 For the UK company, see Metroline. For the line in Edmonton, Canada, see Metro Line. Modern services on rapid transit systems are provided on designated lines between stations typically using electric multiple units on rail tracks, although some systems use guided rubber tyres, magnetic levitation, or monorail. The stations typically have high platforms, without steps inside the trains, requiring custom-made trains in order to avoid gaps. Manila Light Rail Transit System. Quick and inexpensive to ride, the system serves 2.1 million passengers each day. 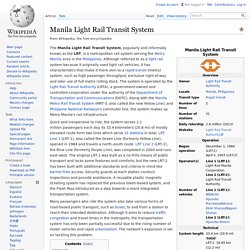 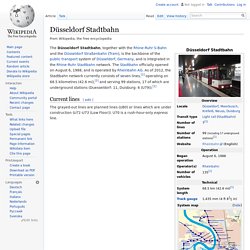 U70 is a rush-hour-only express line. Düsseldorf Stadtbahn. Stuttgart Stadtbahn. Ruhbank Stadtbahn station Stadtbahn cars at the terminus of line U1 A sign at a light rail stop in Stuttgart which includes information advising passengers whether services will be formed of single or double / twin light rail vehicles. 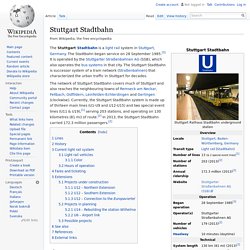 The Stuttgart Stadtbahn is a light rail system in Stuttgart, Germany. The Stadtbahn began service on 28 September 1985.[3] It is operated by the Stuttgarter Straßenbahnen AG (SSB), which also operates the bus systems in that city. Bonn Stadtbahn. The Bonn Stadtbahn (English: city rail) is a part of the local public transit system in Bonn and the surrounding Rhein-Sieg area, that also includes the Bonn Straßenbahn. Although with six actual Stadtbahn lines[1] (as well as three tram lines) the network is relatively small, two of Bonn's Stadtbahn lines connect to the much larger Cologne Stadtbahn (and are numbered according to that system, not Bonn's). The Stadtbahn network comprises 95.84 kilometres (59.55 mi) of route.[1] There are 64 stations and stops in the city of Bonn proper,[1] and another 17 in Siegburg and Bad Honnef.[1] Additionally, 8.72 kilometres (5.42 mi) of the Stadtbahn is located underground,[1] as are 12 of the Stadtbahn stations.

History[edit] In the middle of the 1960s Bonn lay at the heart of five different railway enterprises. Besides the Deutsche Bundesbahn (the West German national railway company) there was the independent Cologne-Bonn railway (KBE) and three separate tram concerns: Baltimore Light Rail. A LRV waits at a red light near Camden Yards. The Light Rail travels in mixed traffic in downtown Baltimore Light Rail vehicle on Howard Street downtown Southbound Hunt Valley-BWI train at Lutherville station History[edit] Beginning in the late 1980s, Governor William Donald Schaefer (a former mayor of Baltimore) pushed for building a transit line along this corridor, motivated in part by a desire to establish a rail transit link to the new downtown baseball park being built at Camden Yards for the Baltimore Orioles.

Three extensions to the system were added in 1997. In 1998, the Hamburg Street station opened as an infill station between the existing Westport and Camden Yards stations. To save money, much of the system was built as single-track. East Midlands Hub railway station. After a sifting process, HS2 Ltd offered a shortlist of East Midlands services consisting of this site and the expansion of the existing Derby station, with the Government stating its preference for a station at Toton in January 2013. The plans are supported by Nottingham City Council, whereas Derby City Council would prefer the station to be sited at Derby rail station and Rushcliffe Borough Council support the expansion of the existing East Midlands Parkway station. In early October 2014, reports emerged that the preferred location for the East Midlands Hub station had been relocated to Breaston, 2-3 kilometres south-west of Toton.

By July 2015 HS2 Ltd confirmed they were not considering the Breaston site and that their preferred location for the station was at Toton. Regional Eurostar. Regional Eurostar was the name given to plans to operate Eurostar train services from Paris and Brussels to locations in the United Kingdom beyond London. The services would have been run using a fleet of seven North of London, 14-coach British Rail Class 373/2 trainsets. Beginnings[edit] A depot for the regional Eurostar services, Manchester International Depot, was constructed at Longsight in Manchester by London and Continental Railways. A large Eurostar-branded sign was attached to the outside of this depot which ambitiously proclaimed to passing train passengers "le Eurostar habite ici" (French for "the Eurostar lives here"), despite the fact that the depot was empty and unused; the sign remained in place for several years after the Regional Eurostar project was abandoned.[1] Trial runs were undertaken using the 373/2 sets on both the East and West Coast Main Lines and passenger information signs and Eurostar lounges were installed at stations along the route.

Intercity-Express. The Intercity-Express (written as InterCityExpress in Austria, Denmark, Switzerland and, formerly, in Germany) or ICE (German pronunciation: [iːtseːˈʔeː]) is a system of high-speed trains predominantly running in Germany and its surrounding countries. It is the highest service category offered by DB Fernverkehr and is the flagship of Deutsche Bahn. The brand name "ICE" is among the best-known in Germany, with a brand awareness close to 100%, according to DB.[1] There are currently 259 trainsets in five different versions of the ICE vehicles in use, named ICE 1 (deployed in 1991), ICE 2 (1996), ICE T (1999), ICE 3 (1999) and ICE TD (2001–2003, back in service 2007). The ICE 3, including its variant models, is made by a consortium led by Bombardier and Siemens.

TGV. High-speed rail in France. The first French high-speed rail line opened in 1981, between Paris's and Lyon's suburbs. Landrücken Tunnel. The Landrücken Tunnel is a railway tunnel on the Hanover-Würzburg high-speed rail line. With a length of 10,779 metres (35,364 ft) it is the longest tunnel in Germany. Intercity. Thalys. Thalys ("THALL-ees") is an international high-speed train operator originally built around the LGV Nord high-speed line between Paris and Brussels. This track is shared with Eurostar trains that go from Paris or Brussels to London via Lille and the Channel Tunnel and with French domestic TGV trains. High-speed rail in Germany. UK Ultraspeed. UK Ultraspeed was a proposed high-speed magnetic-levitation train line between London and Glasgow, linking 16 stations including Edinburgh, Birmingham, Manchester and Newcastle and six airports.