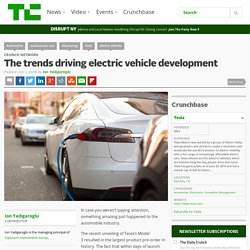 The recent unveiling of Tesla’s Model 3 resulted in the largest product pre-order in history. The fact that within days of launch about 400,000 people paid $1,000 each for a car they will receive in 2018 is simply astounding. In addition to the $400 million wired to Tesla, this represents an order book of more than $15 billion dollars. There’s more. Three technology trends are converging in automobile transportation — and not a minute too soon, given the giant emissions and human carnage wrought by conventional vehicles: These three big technological themes have accelerated over the past decade, and they are now showing multiplier effects on each other.

Battery technology is at the core of what is needed to further drive electric vehicle adoption. World's 1st Fully Electric & Autonomous Container Ship Enters Service. Joint Agreement Signed to Build Cargo Ship of the Future NORWAY – Chemical company Yara International, and technology group Konsberg Maritime, have entered into an agreement to build what the two Norwegian companies say will be the world's first fully electric and autonomous container ship with zero emissions. 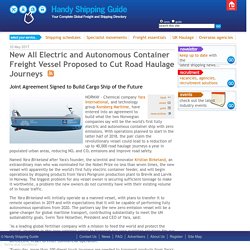 With operations planned to start in the latter half of 2018, the pair claim the revolutionary vessel could lead to a reduction of up to 40,000 road haulage journeys a year in populated urban areas, reducing NOx and CO2 emissions and improve road safety. Introduction of 'Tesla of the Canals' 3.5Bn Citizens Now Use eIDs at Airports. At the start of this year, a team of researchers at the Norwegian University of Science and Technology’s Biometric Laboratory (NBL) in Gjøvik announced their latest development: a more accurate, trustworthy algorithm that detects and tracks passengers based on their facial features throughout their entire journey within the airport. 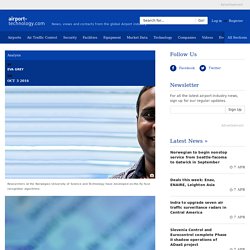 The use of biometry for fast, modern and accurate identification isn’t new, with everything from fingerprints, palm veins, face features and DNA to iris and retina recognition being either tested or already in use across multiple industries and commercially available devices. The market for biometric systems is growing fast, and is expected to reach $24.4bn by 2020, according to research firm MarketsandMarkets which also identified travel and immigration as the leading application markets for biometry. On the one hand, its popularity is due to increasing security issues worldwide; but it can also be used as a means to handle rising passenger numbers. US Navy's First Unmanned Vessel Completes Sea Trials. During the next two years, the U.S. 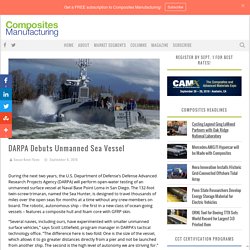 Department of Defense’s Defense Advanced Research Projects Agency (DARPA) will perform open-water testing of an unmanned surface vessel at Naval Base Point Loma in San Diego. The 132-foot twin-screw trimaran, named the Sea Hunter, is designed to travel thousands of miles over the open seas for months at a time without any crew members on board. Baidu Launches Driverless Public, Shared Shuttle Service. Reno Trials Fully Autonomous Public Bus Route. Reno, Nevada, may not seem like the place to develop the country’s first self-driving public bus, but Richard Kelley thinks it presents all the right challenges. 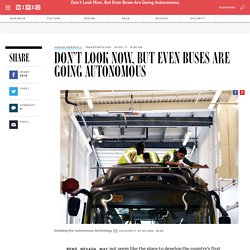 The buildings are taller than those in the office parks of the Silicon Valley, providing a good visual test for the complex algorithms. The weather is more taxing, arid with occasional snowfall. Then there’s the foot traffic. EasyJet Launches First Electric Plane. Moving towards a more sustainable future, British budget carrier easyJet has vowed to develop new electric planes for use on short-haul routes by 2030. 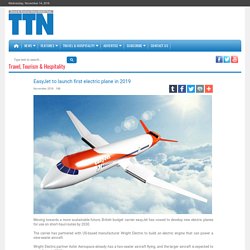 The carrier has partnered with US-based manufacturer Wright Electric to build an electric engine that can power a nine-seater aircraft. Wright Electric partner Axter Aerospace already has a two-seater aircraft flying, and the larger aircraft is expected to start flying in 2019. Aircraft designer Darold Cummings will design the easyJet-sized electric aircraft. Furthermore, the introduction of electric planes would help major airlines help combat the rising price of jet fuel whilst cutting emissions, noise and travel costs. Johan Lundgren, CEO of easyJet, said: “We know it is important to our customers that we operate sustainably and with the introduction of A320neos, we can already provide a 15 per cent reduction in carbon emissions and 50 per cent less noise footprint, putting us amongst the best-ranking airlines in Europe. Early Arrival of 'Level 5' Driverless Cars. Ford has promised autonomous vehicles by 2021. 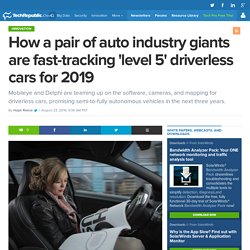 Tesla's upcoming Model 3, slated for 2017, could be capable of a more advanced form of self-driving than it currently offers with its Autopilot beta. But on Tuesday, a partnership announced by Mobileye and Delphi—developers of parts for driverless vehicles—promises to bring level 4 and 5 autonomous driving capability to automakers across the globe by 2019. "Regulators want fewer injuries and fatalities, city planners want to reduce congestion and commuters want less traffic and to more productively use time during their commute," said Kevin Clark, president and CEO of Delphi Mobile. "We all agree that autonomous vehicles are the key to addressing these challenges," he said. Self-Driving Cabs Hit Singapore Streets. Mercedes Launches All-Electric EQ Concept Platform. Mercedes finally unveiled the Generation EQ concept, a SUV coupe study that previews a new family of electric vehicles under the new EQ brand. 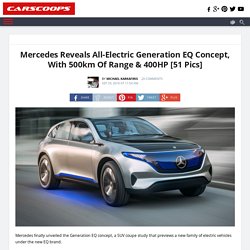 Commercial Introduction of the "Zero Charge" EV. In just a few years, we could see an electric car on the market that doesn't need a charging station to 'fuel up.' The biggest apparent stumbling blocks for electric vehicles (EVs) seems to be their range - the distance that can be driven between charging - and the time it takes for an EV battery to be charged. 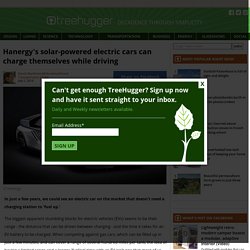 When competing against gas cars, which can be filled up in just a few minutes, and can cover a range of several hundred miles per tank, the idea of having a limited range and a longer 'fueling' time with an EV isn't one that most of us are comfortable with. And when considering the easy availability of fuel from the vast number of gas stations (as opposed to the EV charging stations that are few and far between in most areas), switching from gas to electric mobility is a bit of a stretch for many people (not even taking into account the higher cost for EVs).

Cummins Market Electric Truck with 100-300m Range. While the world waits for Tesla to unveil its electric truck in September, one of those industry veterans beat it to the punch. 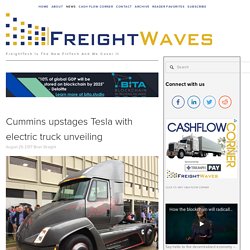 Tesla has been teasing its vehicle with regular tweets and hints from Elon Musk, including one last week that its vehicle may have a range of up to 300 miles. But just weeks before Tesla unveils its prototype, Cummins showed off its own. Large-Scale Launch of Self-Driving Cars in U.S. Cities by GM. Volvo Introduces 180km/h Speed Limiter to all its New Cars. Few automakers have staked the reputation of their brands on safety quite the way Volvo has.

Several years ago, Volvo's President Håkan Samuelsson announced that the company was enacting a plan called Vision 2020—building cars so safe that by 2020 no one is killed or seriously injured in a new Volvo. On Monday, the company revealed the latest part of this plan. From next year, all new Volvos (beginning with the 2021 model year) will be limited to 112mph (180km/h). "Because of our research we know where the problem areas are when it comes to ending serious injuries and fatalities in our cars. The Start of the Decade of the Autonomous Vehicle. When 2020 hits, you can bet it will start the decade of driverless cars. Volvo We rounded up 19 companies aiming to have driverless car technology ready by 2020, some even declaring their fully autonomous car will be hitting the roads at that time. (Assuming the various necessary regulations are in place, of course.)

Here's who is in the race to make driverless cars a reality just four years from now. Scotland Launces First Sea-Going Hydrogen Ferry. Scotland’s Ferguson Shipbuilders have managed to secure funding through the EU project HySeas III. With partners such as the Ballard or DLR and from different European countries they will build the world’s first sea going ferry running on fuel cells powered by hydrogen from renewables. The supported development of the first hydrogen ferry ready to sail the world’s oceans is expected to cost around 12.6 million euros. Freighter Yara Birkeland Goes Fully Autonomous. Tech companies from Google to Apple may be ploughing resources into driverless cars, but on our oceans, automated ships could be making bigger waves by the end of the decade. Image: Yara Norwegian company Yara will launch the world’s first electric cargo ship next year.

Initially manned, the vessel will move to remote control in 2019, before becoming totally autonomous in 2020. Rolls-Royce Introduces Drone Merchant Fleet. Dubai Police Introduce Hoverbikes for Emergency Response. Dubai is aggressively turning itself into a "Future City," putting self-flying taxis in the skies and a facial recognition system in its airport. The Dubai police department's latest ride is now adding another sci-fi transportation staple: the hoverbike. The Dubai police, which already has luxury patrol cars, self-driving pursuit drones, and a robot officer, just announced it will soon have officers buzzing around on hoverbikes, which look like an early version of the speeder bikes used by the scout troopers on Endor in Return of the Jedi.

EV Charge Points Outnumber UK Petrol Stations. Mercedes-Benz' Short-Range Urban eTruck in Production. Fully Electric Heavy-Duty Trucks Hit the Market. Nicola Hydrogen-Electric Truck In Production. Uber Launches the Flying Car. Uber is more than fly-curious about taking ridesharing to the air. The company announced Tuesday that it plans to roll out a network of flying cars in Dallas-Fort Worth and, of course, Dubai by 2020. If that sounds ambitious, you possess a basic understanding of the challenges involved here. The kind of aircraft Uber envisions shuttling customers through the air—electric, with vertical takeoff and landing capability, and capable of flying 100 miles in just 40 minutes—don’t exist yet. Nor does the infrastructure to support them. The FAA, an agency not known for speed, must ensure these aircraft meet all federal safety regulations and figure out where and how they fit into a complex air traffic control system.