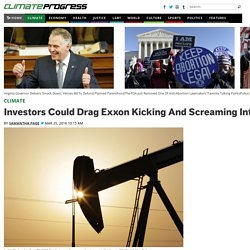 First, the Securities and Exchange Commission ruled that the company has to allow shareholders to vote on a climate change resolution. Then, the Rockefeller Family Fund announced it would divest from fossil fuels — and took the opportunity to hit Exxon specifically for misleading investors about the risks of climate change. Exxon is one of the world’s largest oil and gas firms. With a business model that is almost entirely dependent on the exploration, extraction, refinement, transportation, and sale of oil and gas, Exxon is also one of the largest contributors of human-generated greenhouse gases. Oil and gas is still a lucrative business. 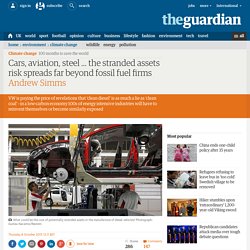 You’d suddenly be left with a lot of shiny stuff you couldn’t shift. It would be a ‘stranded asset’ – the victim of an unanticipated devaluation due to shifting fashion (though you might argue it was always a liability). Increasingly, mainstream acceptance that money poured into fossil fuels risks becoming trapped in similarly stranded assets, raises the intriguing possibility that the logic might leak out and touch other parts of the economy which are heavily dependent on the same fossil fuels. 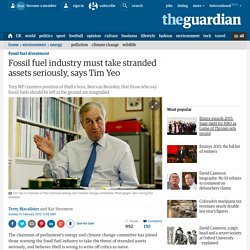 Tim Yeo, a veteran Conservative MP and nuclear enthusiast, also expressed alarm at the latest delays at the new Hinkley Point building project in Somerset, saying he hoped they would not lead to eventual cancellation. Shell’s chief executive, Ben van Beurden, told a dinner of the international petroleum industry last week that those who argued fossil fuels should be kept in the ground were misguided in a world of rising energy demand. How should investors look at stranded assets? Oil majors once again were playing down the risks associated with the "carbon bubble" this week, warning that markets and particularly poor countries would suffer if the world turned away from hydrocarbons. 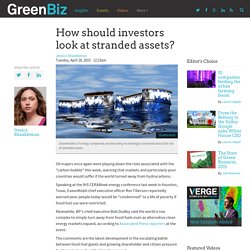 Speaking at the IHS CERAWeek energy conference last week in Houston, Texas, ExxonMobil chief executive officer Rex Tillerson reportedly warned poor people today would be "condemned" to a life of poverty if fossil fuel use were restricted. Meanwhile, BP's chief executive Bob Dudley said the world is too complex to simply turn away from fossil fuels even as alternative clean energy markets expand, according to Associated Press reporters at the event. Investment consultants told to ‘man up’ on stranded assets. Bankers See $1 Trillion of Zombie Investments Stranded in the Oil Fields. There are zombies in the oil fields. 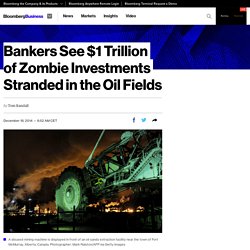 After crude prices dropped 49 percent in six months, oil projects planned for next year are the undead -- still standing upright, but with little hope of a productive future. HSBC outlines four ways to divest from fossil fuels. 24 Apr 2015, 16:12Sophie Yeo The divestment movement is gathering steam, with universities, cities, charities and pension funds under increasing pressure to move their money out of the fossil fuel industry. 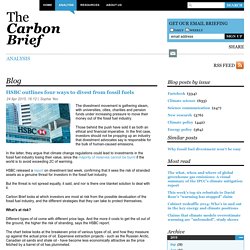 Those behind the push have sold it as both an ethical and financial imperative. In the first case, investors should not be propping up an industry that divestment advocates say is responsible for the bulk of human-caused emissions. New oil order – Leaner times for ‘Fort McMoney’ — FT. FT series: Canada’s oil sands industry is choked of investment after price collapses <div class="storyvideonojs"><div><p>You need JavaScript active on your browser in order to see this video. 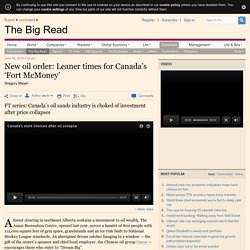 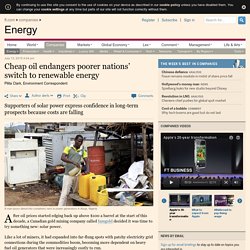 FT. He Financial Times has been investigating what the plunge in the oil price since the summer of 2014 has meant for the industry, consumers and producers. 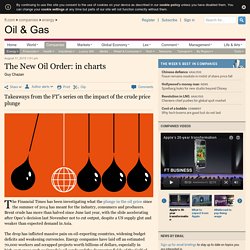 Brent crude has more than halved since June last year, with the slide accelerating after Opec’s decision last November not to cut output, despite a US supply glut and weaker than expected demand in Asia. The drop has inflicted massive pain on oil-exporting countries, widening budget deficits and weakening currencies. Energy companies have laid off an estimated 70,000 workers and scrapped projects worth billions of dollars, especially in high-cost areas such as Canada’s oil sands and the deepwater fields of the Gulf of Mexico. The low oil price is reshaping the industry landscape: it drove Royal Dutch Shell’s $55bn takeover of smaller rival BG Group, and triggered the fall of Nigeria-focused oil explorer Afren, which entered administration last month. But even Canada, a much wealthier country, is being squeezed.

Plunge in North Sea investment predicted — FT. The low oil price has forced operators in the North Sea to cut jobs, pay and other operating costs Capital investment in the North Sea will have halved in two years, warns a report that lays bare the impact of the oil price slump on one of Britain’s biggest industries. 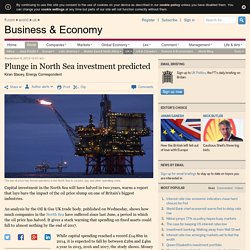 An analysis by the Oil & Gas UK trade body, published on Wednesday, shows how much companies in the North Sea have suffered since last June, a period in which the oil price has halved. It gives a stark warning that spending on fixed assets could fall to almost nothing by the end of 2017. While capital spending reached a record £14.8bn in 2014, it is expected to fall by between £2bn and £4bn a year in 2015, 2016 and 2017, the study shows. Fossil fuel lobby goes on the attack against divestment movement. “First they ignore you, then they laugh at you, then they fight you,” said Mahatma Gandhi. The climate change campaign to divest from fossil fuels seems to be moving through those stages at express speed, with a sudden barrage of attacks from the coal and oil lobbies ahead of its global divestment day on Valentine’s day.

The speed is appropriate given that the campaign, which argues the fossil fuel industry is a danger to both the climate and investors’ capital, is the fastest growing divestment campaign yet seen, moving quicker than those against tobacco and apartheid. First Country in the World Dumps Fossil Fuels As Divestment Movement Heats Up.

Back in 2012, Bill McKibben with fellow activists including Naomi Klein, Winona LaDuke, Josh Fox and Reverend Lennox Yearwood began a nationwide tour to promote fossil fuel divestment—that is, selling off your shares in fossil fuel companies–in an effort to combat climate change. With action in Congress impossible, McKibben saw college campuses—known for being laboratories of democracy—as ground zero in the campaign for divestment. With his ‘Do the Math’ campaign in sold-out concert halls across America, McKibben and others were able to launch Fossil Free, an international network of divestment campaigns. It’s a project of the larger organization 350.org.

Fifty foundations pledge to divest from fossil fuels. By Dana Hull dhull@mercurynews.com Posted: 09/22/2014 05:41:51 AM PDT5 Comments|Updated: about 19 hours ago Organizers of the growing movement to persuade investors to divest from fossil fuels will announce a major milestone Monday, when more than 50 foundations, institutions and wealthy individuals who control at least $50 billion in assets will pledge to begin pulling their investments from fossil fuels, particularly coal and oil. Jeremy Grantham: Tar Sands to Become a Stranded Asset  The head of the International Monetary Fund has warned that our planet is "perilously close" to a dangerous tipping point which will usher in "merciless" climate change. Speaking in London last week week, Christine Lagarde called for a carbon tax, and cut in fossil fuel subsides: "We are subsidizing the very behaviour that is destroying our planet.

Both direct subsidies and the loss of tax revenue from fossil fuels ate up almost $2 trillion in 2011. This is about the same as the total GDP of countries like Italy or Russia. " The 'stranded assets risk' debate in the oil sector. Slide 1 - Stranded Assets - Slide presentation.pdf. Schumpeter: A green light. ON MARCH 20th Exxon Mobil, surely the world’s least tree-hugging company, became the first oil giant to say it would publish details of its “stranded assets”—the value of oil and gas fields that it might not be able to exploit if there were a high carbon price or tough rules on greenhouse-gas emissions. Giant Exxon is not doing this because it has gone mushy or caved in to green activists. Rather, it is heading off a shareholder resolution by Arjuna Capital, a fund manager, demanding explanations and actions on environmental threats to the firm. Exxon’s decision is the biggest step so far in a wider business trend: companies publishing information on their environmental impact and vulnerability to green regulation, to attract or placate investors.

The depth of the financial system's exposure to high carbon and environmentally unsustainable investments could be a systemic risk that threatens economic security. GND-Carbon-Bubble-web1.pdf. Stranded Assets and Scenarios - Discussion Paper.pdf. SAP-divestment-report-final.pdf. PB-unburnable-carbon-2013-wasted-capital-stranded-assets.pdf. The risks of investing in stranded assets and the opportunities of the new economy. After Bubbles in Dotcoms and Housing, Here’s the Carbon Bubble - Corporate Intelligence. Financial Analyses of Stranded Assets & the Carbon Bubble — Enviromental Studies. Exxon, stranded assets and the new math. ExxonMobil last week agreed to publish a “Carbon Asset Risk” report describing how it assesses its financial risks from climate change, namely a potentially lowered valuation of its oil reserves.

The move is being seen by some as a pivotal milestone on the road to a low-carbon economy. According to the press release issued by the shareholder activist groups that negotiated this, “The report will provide investors with greater transparency into how ExxonMobil plans for a future where market forces and climate regulation makes at least some portion of its carbon reserves unburnable.”