Unmanned Drones Technologies articles and videos from around the internet

Drones help scientists monitor endangered sea turtles. After more than one study found that drones are better than humans at monitoring wildlife populations, their use in endangered animal studies has quickly increased. 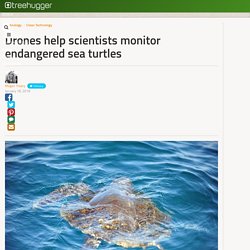 Researchers at Duke University and the University of North Carolina have begun using drones to count endangered sea turtles along the Costa Rican coast. Sea turtles populations have been difficult to estimate because the animals spend much of their lives at sea, coming ashore only to lay eggs during the nesting season. Counting the animals has typically been done by boat or by counting the turtles on nesting beaches, which only gave scientists a snapshot of a small area. 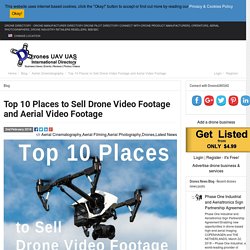 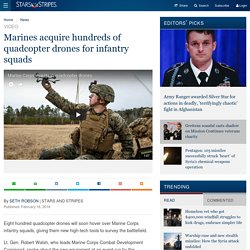 Lt. Gen. Robert Walsh, who leads Marine Corps Combat Development Command, spoke about the new equipment at an event run by the Association of Unmanned Vehicle Systems in Maryland on Feb. 6. “We need new unmanned systems, fast,” he said, according to the association’s website. The remote-controlled drones will be fielded at a rate of 200 per month with priority given to deploying units, according to the Defense One news site.

DroneScan: programmatic contol of a drone: first tests. Using Global Mapper for UAV-Collected Imagery. BACKGROUND: DroneMapper is one of the success stories in the fledgling field of UAV data collection and processing. 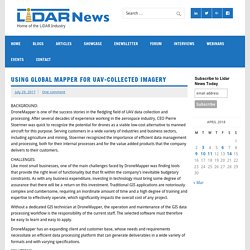 After several decades of experience working in the aerospace industry, CEO Pierre Stoermer was quick to recognize the potential for drones as a viable low-cost alternative to manned aircraft for this purpose. Serving customers in a wide variety of industries and business sectors, including agriculture and mining, Stoermer recognized the importance of efficient data management and processing, both for their internal processes and for the value added products that the company delivers to their customers.

CHALLENGES: Like most small businesses, one of the main challenges faced by DroneMapper was finding tools that provide the right level of functionality but that fit within the company’s inevitable budgetary constraints. Traveling with your Drone - Make sure you know the rules in Thailand. 13th October 2017 Aerial Photography,Drone Regulation,Latest News,Leisure Industry,Quadcopters,Travel,UAV UAS RPAS Drones An article published by the Bangkok Post in Thailand yesterday indicates that drone users could face fines and lengthy jail terms if they fail to register their drone by a certain deadline, the authorities are apparently getting worried because in the last two years only 350 drones out of a possible 50,000 have been registered. 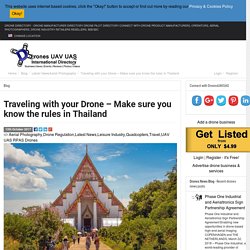 The article titled: Drone users face fines, jail terms reports that all drones must be registered within 90 days or the owner user will face years in prison and a large fine. Great Barrier Reef under watchful eye of drones piloted by Queensland rangers. Posted Media player: "Space" to play, "M" to mute, "left" and "right" to seek. 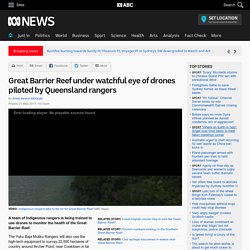 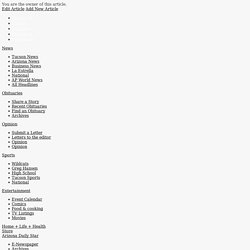 The Small Unmanned Aircraft System is designed to help agents better patrol difficult to access and high-risk areas, officials said, and be small enough for agents to carry in a truck or even a backpack. During the pilot phase, agents will test in the field for the first time three different series of aircraft: Puma, Raven and InstantEye Quadcopter— all designed to be portable, said Customs and Border Protection spokesman Roland “Chip” Filiault. 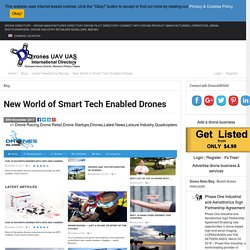 It seems that new websites popup every day and we just discovered Drones Globe, a new site that provides information about consumer drones that are available to purchase in the current retail market. First Impressions At the time of writing “Drones Globe” comes across as a well designed, well constructed website that provides some useful information and direct access to the purchase of consumer drone products via links to other websites. The website is easy to use it has a functional menu system that is easy to navigate.

We found “Drones Globe” to be a useful drone comparison website, mainly because it shows many of the different drone types available today and you can easily make comparisons with different models. The Challenges of Drone Mapping. Utilizing Drone Imagery – From Spatial Data to Spatial Knowledge Contemporary mapping landscape is changing rapidly. 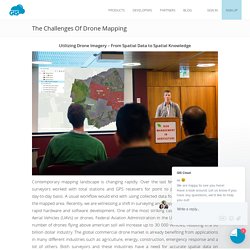 Over the last few decades, most of the surveyors worked with total stations and GPS receivers for point to point data collection on day-to-day basis. A usual workflow would end with using collected data for generating 2D plans of the mapped area. On a essayé le drone aile volante Parrot DISCO. 10 Questions to ask before you hire a drone operator. 10th July 2017 Aerial Mapping,Aerial Photography,Aerial Surveying,Agricultural Services Providers,Estate Agents,Insurance for Drones,Latest News Once you find a drone operator who has the potential to help you with your aerial data gathering project what do you do next? 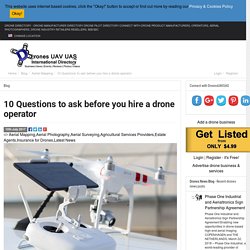 Well first you must evaluate whether they are right for the job you have in mind. Altus Intelligence Unveils Electric VTOL UAS. Published: 11 Aug 2017 | Author: Mike Rees Altus Intelligence has unveiled an electric helicopter drone platform ahead of its official release at Interdrone in Las Vegas this coming September. The ORC2 is a small battery-powered UAS, capable of 60 minute flight times. The ORC2 features the same unique autopilot technology as Altus’ larger water-cooled 70cc twin gasoline engine-powered ORC4 UAS.

The autopilot allows both systems to be flown as a multirotor, utilizing the same Ground Control Station across all Altus craft. Digitaltrends. Drones Could One Day Patrol US Borders. Racing Drone Specialists in FPV Adventures. 19th January 2017 Drone Racing,Drone Startups,Drones,Latest News,Quadcopters DronesUAVUAS.com is delighted to welcome: Atmospheric Adventures from Florida in the United States. STOP MOTION ALPHA 800. Can drones help save the whales? Ecologists used drones to create more accurate lists of the whale and dolphin pods near Hawaii for the first time this summer. And if drones can help save the whales, what else can they do? Drones entered the public consciousness either as military weapons or as an obscure hobby that occasionally crash-landed on the White House lawn.

The drone involvement with the National Oceanic and Atmospheric Administration's recent whale-watching expedition is a window into a growing list of nonmilitary functions for the drones, which play an increasing role in police work, real estate, or even firefighting. Drone use in animal research and other forms of ecology is in its early stages, as researchers work with both the technology and process, improving their observational reach via drone. How do you plant 1 billion trees a year? With drones, of course. Instead of doing surveillance or carrying out military missions, the drones from BioCarbon Engineering are taking on a decidedly more progressive task: planting trees and reversing deforestation.

Drones, or unmanned aerial vehicles (UAVs), have taken off in popularity recently, with hobbyists and professionals alike using these small remotely-guided devices for everything from delivering packages to surveying wildlife populations, but one startup has a very ambitious plan for their drones, and one that could have a huge positive impact on global deforestation. "We are going to counter industrial scale deforestation using industrial scale reforestation. Destruction of global forests from lumber, mining, agriculture, and urban expansion destroys 26 billion trees each year. We believe that this industrial scale deforestation is best combated using the latest automation technologies. " - BioCarbon Engineering. Edible craft to have wings stuffed with food and medical supplies for humanitarian missions. Using airdrops to deliver relief to disaster zones may sound like a simple solution, but these missions have proved to be inaccurate, wasteful and expensive.

With that in mind, ex-British Army veteran Nigel Gifford is developing a drone with edible wings that is capable of carrying 100-pounds of vacuum-packed food and medical supplies. Although in early stages, the 'Pouncer' would be released from a plane or catapult and dropped within a 25 mile radius of the target. 10 Stunning Examples of Aerial Film Photography by Drones. 1st September 2016 Aerial Cinematography,Aerial Photography,Travel 10 Stunning Examples of Aerial Film Photography by Drones! Tactical Robotics expands flight testing of Cormorant UAV - Vertical Magazine. Tactical Robotics Ltd., a wholly owned subsidiary of Urban Aeronautics, is expanding the flight testing of its Cormorant unmanned aerial vehicle (UAV) and releasing new flight footage of the aircraft. CIMSEC And The Atlantic Council Launch Fiction Contest On Autonomy And Future War.

Contest Publication Dates: October 31 – November 4 Submissions Due: October 21 Winners Announced: November 7 Article Length: 2,000 – 5,000 words Submit to: Nextwar@cimsec.org Prizes: $500 Grand Prize, $250 Runner-Up By Sally DeBoer and August Cole CIMSEC and The Atlantic Council’s Art of the Future Project are teaming to host a Fiction Contest on Autonomy and Future War. This contest will explore the nuances of unmanned naval systems employed in combat or crisis through creative fiction. Interaerial SOLUTIONS - Your commercial drone show to make business! UK MoD Allows Use Of Unmanned Surface Vehicle Software. The UK Ministry of Defence has signed a licence agreement with ASV Global allowing for the use of its Advanced Unmanned Surface Vehicle (USV) Capability technology.