Mozio, the ground transport aggregator, aims to give TMCs a lift. Mozio, a startup known for its airport transfer search and booking engine, is hoping to pick up business from travel management companies (TMCs) and corporate agencies. 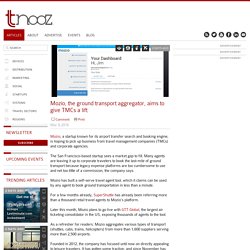 The San Francisco-based startup sees a market gap to fill. Many agents are leaving it up to corporate travelers to book the last-mile of ground transport because legacy expense platforms are too cumbersome to use and net too little of a commission, the company says. Mozio has built a self-serve travel agent tool, which it claims can be used by any agent to book ground transportation in less than a minute. For a few months already, SuperShuttle has already been referring more than a thousand retail travel agents to Mozio’s platform.

Hey Uber, Lyft Is Growing Faster Than You. Uber’s revenue numbers, which were leaked to Gawker just a few weeks ago, look bold at roughly $20 million per week. 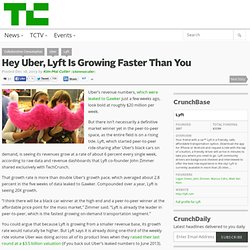 But there isn’t necessarily a definitive market winner yet in the peer-to-peer space, as the entire field is on a rising tide. Lyft, which started peer-to-peer ride-sharing after Uber’s black cars on demand, is seeing its revenues grow at a rate of about 6 percent every single week, according to raw data and revenue dashboards that Lyft co-founder John Zimmer shared exclusively with TechCrunch. That growth rate is more than double Uber’s growth pace, which averaged about 2.8 percent in the five weeks of data leaked to Gawker. Compounded over a year, Lyft is seeing 20X growth. “I think there will be a black car winner at the high end and a peer-to-peer winner at the affordable price point for the mass market,” Zimmer said.

You could argue that because Lyft is growing from a smaller revenue base, its growth rate would naturally be higher. On-Demand Taxi Startup Hailo Raises $30M From USV And Others, Including Strategic Funding From KDDI To Launch In Tokyo. On-demand taxi service Hailo is looking east. 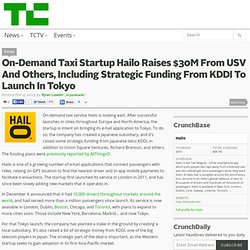 After successful launches in cities throughout Europe and North America, the startup is intent on bringing its e-hail application to Tokyo. To do so, the company has created a Japanese subsidiary, and it’s raised some strategic funding from Japanese telco KDDI, in addition to Union Square Ventures, Richard Branson, and others. The funding plans were previously reported by AllThingsD. Hailo is one of a growing number of e-hail applications that connect passengers with rides, relying on GPS location to find the nearest driver and in-app mobile payments to facilitate transactions. The startup first launched its service in London in 2011, and has since been slowly adding new markets that it operates in. In December it announced that it had 10,000 drivers throughout markets around the world, and had served more than a million passengers since launch. Bus booking service TicketGoose raises $3 million funding. India-based online bus reservation service TicketGoose has raised its second round funding of $3 million from Indventure, a Chicago-based investor firm. 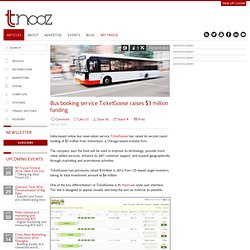 The company says the fund will be used to improve its technology, provide more value added services, enhance its 24/7 customer support, and expand geographically through marketing and promotional activities. TicketGoose had previously raised $1million in 2012 from US-based angel investors, taking its total investment amount to $4 million. One of the key differentiators of TicketGoose is its Hipmunk-style user interface. The site is designed to appeal visually and keep the text as minimal as possible.

Car Service - Groundlink Global Car Service and Airport Pickup. GroundLink - New York, NY - The Inc.5000. GroundLink, A Car Service App That Circumnavigates The Globe. While car service apps like Uber and Flinc seem to be populating our mobile devices in rapid number, GroundLink appears to be the only one that has global coverage around the clock - allowing geek cred to 'virtually' replace the old school street cred of hailing a cab. 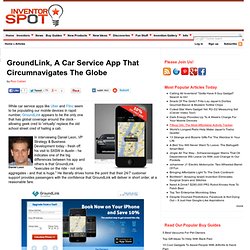 Daniel LeonIn interviewing Daniel Leon, VP Strategy & Business Development today - fresh off his visit to SXSW in Austin - he indicates one of the big differences between his app and others is that GroundLink "executes on the ride - not only aggregates - and that is huge. " He literally drives home the point that their 24/7 customer support provides passengers with the confidence that GroundLink will deliver in short order, at a reasonable fare. In this YouTube videok, CEO Alex Mashinksky further describes the value-added features and benefits that Groundlink provides its customers. 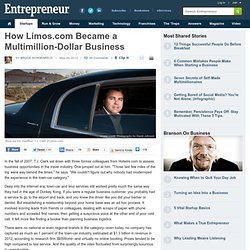 Clark of Limos.com. In the fall of 2007, T.J. Clark sat down with three former colleagues from Hotwire.com to assess business opportunities in the travel industry. One jumped out at him. "Those last few miles of the trip were way behind the times," he says. Deep into the internet era, town-car and limo services still worked pretty much the same way they had in the age of Donkey Kong. There were no national or even regional brands in the category--even today, no company has captured as much as 1 percent of the town-car industry, estimated at $1.3 billion in revenue in 2012, according to research firm IBISWorld--and virtually no online booking.

A former intercollegiate swimmer at Notre Dame and then a Chicago trial lawyer, Clark moved to San Francisco to join the Hotwire team led by college friend Karl Peterson, then stayed on when IAC bought the company in 2003. Orbitz for Business Adds Limos.com Private Car Services in 62 Countries Worldwide. Orbitz Worldwide, Inc. 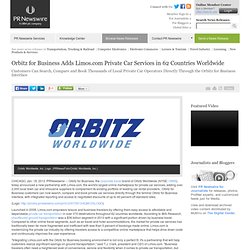 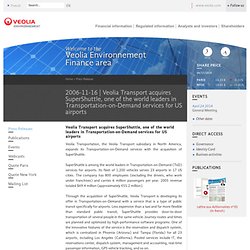 SuperShuttle is among the world leaders in Transportation-on-Demand (ToD) services for airports. Its fleet of 1,200 vehicles serves 23 airports in 17 US cities. The company has 800 employees (excluding the drivers, who work under franchises) and carries 6 million passengers per year. 2005 revenue totaled $69.4 million (approximately €55.2 million). CIO 100 Winner Profile: SuperShuttle.