Mesoproterozoic. This era is marked by the further development of continental plates and plate tectonics. 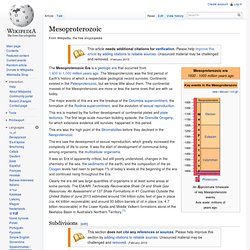 The first large-scale mountain building episode, the Grenville Orogeny, for which extensive evidence still survives, happened in this period. This era was the high point of the Stromatolites before they declined in the Neoproterozoic. The era saw the development of sexual reproduction, which greatly increased the complexity of life to come. It was the start of development of communal living among organisms, the multicellular organisms.

It was an Era of apparently critical, but still poorly understood, changes in the chemistry of the sea, the sediments of the earth, and the composition of the air. Subdivisions[edit] The subdivisions of the Mesoproterozoic are arbitrary divisions based on time. By contrast, the transition from Calymmian to Ectasian has no meaning beyond calendar time. For that matter, they are not completely without biological markers. Sediment. Sediment billowing out from Italy's shore into the Adriatic Sea Sediment is a naturally occurring material that is broken down by processes of weathering and erosion, and is subsequently transported by the action of wind, water, or ice, and/or by the force of gravity acting on the particle itself. 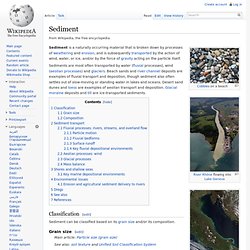 Glacial moraine deposits and till are ice-transported sediments. Classification[edit] Grain size[edit] Sediment size is measured on a log base 2 scale, called the "Phi" scale, which classifies particles by size from "colloid" to "boulder".

Ectasian period. Stenian period. Stromatolite. Morphology[edit] Fossil record[edit] Archean[edit] Some Archean rock formations show macroscopic similarity to modern microbial structures, leading to the inference that these structures represent evidence of ancient life; namely stromatolites. However others regard these patterns as having been due to natural material deposition or other mechanism, and thus abiogenic. Scientists have argued for origin due to stromatolites because of the presence of organic globule clusters within the thin layers of the stromatolites, and of aragonite nanocrystals (both features of current stromatolites),[3] and because of the persistence of an inferred biological signal through changing environmental circumstances.[4][5] Younger[edit] Stromatolites in the Hoyt Limestone (Cambrian) exposed at Lester Park, near Saratoga Springs, New York. Stromatolites (Pika Formation, Middle Cambrian) near Helen Lake, Banff National Park, Canada Modern occurrence[edit] Modern freshwater stromatolites[edit] See also[edit]

Plate tectonics. The tectonic plates of the world were mapped in the second half of the 20th century. 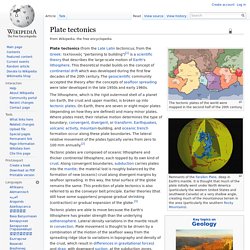 Remnants of the Farallon Plate, deep in Earth's mantle. It is thought that much of the plate initially went under North America (particularly the western United States and southwest Canada) at a very shallow angle, creating much of the mountainous terrain in the area (particularly the southern Rocky Mountains). Plate tectonics (from the Late Latin tectonicus, from the Greek: τεκτονικός "pertaining to building") is a scientific theory that describes the large-scale motion of Earth's lithosphere. This theoretical model builds on the concept of continental drift which was developed during the first few decades of the 20th century. The geoscientific community accepted the theory after the concepts of seafloor spreading were later developed in the late 1950s and early 1960s. 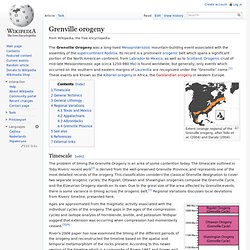 Timescale[edit] The problem of timing the Grenville Orogeny is an area of some contention today. The timescale outlined in Toby Rivers’ recent work[2] is derived from the well-preserved Grenville Province, and represents one of the most detailed records of the orogeny. This classification considers the classical Grenville designation to cover two separate orogenic cycles; the Rigolet, Ottawan and Shawingian orogenies compose the Grenville Cycle, and the Elzevirian Orogeny stands on its own.

Due to the great size of the area affected by Grenville events, there is some variance in timing across the orogenic belt.[1] Regional Variations discusses local deviations from Rivers’ timeline, presented here.