Americans Followed Election Returns Closely. How we did this Pew Research Center’s American News Pathways project conducted this study to understand how Americans are engaging with and perceiving news coverage of the 2020 presidential election. 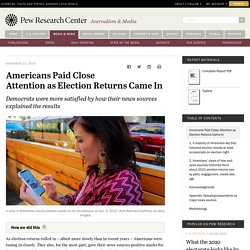 For this analysis, we surveyed 11,818 U.S. adults between Nov. 12-17, 2020. Everyone who completed the survey is a member of Pew Research Center’s American Trends Panel (ATP), an online survey panel that is recruited through national, random sampling of residential addresses. This way nearly all U.S. adults have a chance of selection. The survey is weighted to be representative of the U.S. adult population by gender, race, ethnicity, partisan affiliation, education and other categories. See here to read more about the questions used for this report and the report’s methodology. Trump told advisers he could announce 2024 bid shortly after certification of Biden win: report. Trumpism Wasn't Repudiated in This Election. The liberal hope for the 2020 presidential election was a decisive repudiation of Donald Trump and the Republican Party. 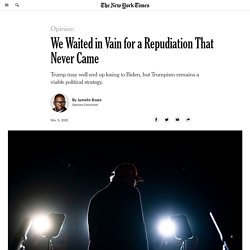 This is no longer on the table. A Joe Biden win, if it happens, will be as narrow an Electoral College win as Trump’s was in 2016. Win or Lose, Trump Will Remain a Powerful and Disruptive Force. WASHINGTON — If President Trump loses his bid for re-election, as looked increasingly likely on Wednesday, it would be the first defeat of an incumbent president in 28 years. 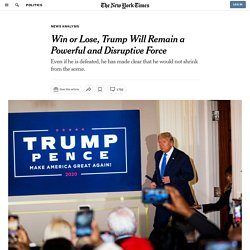 But one thing seemed certain: Win or lose, he will not go quietly away. Trailing former Vice President Joseph R. Biden Jr., Mr. Trump spent the day trying to discredit the election based on invented fraud claims, hoping either to hang onto power or explain away a loss. He could find a narrow path to re-election among states still counting, but he has made clear that he would not shrink from the scene should he lose. 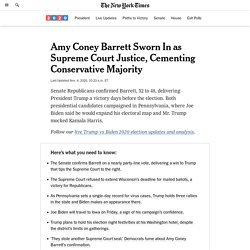 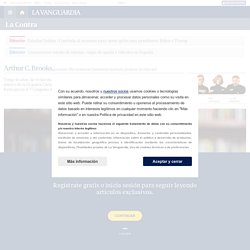 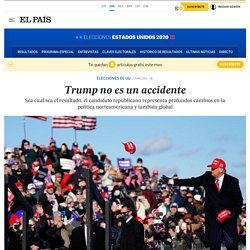 America’s Press and the Asymmetric War for Truth. “Journalism” is a name for the job of reporting on politics, questioning candidates and office-holders, and alerting Americans to what is actually happening in their public sphere. 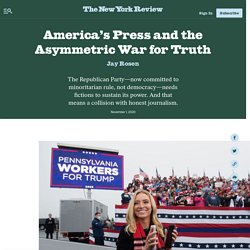 “The press” is the institution in which most journalism is done. The institution is what endures over time as people come into journalism and drift out of it. The coming confrontation can be summarized thus: Guía para seguir la noche electoral en Estados Unidos. En Estados Unidos, el candidato que gana la presidencia no es el que obtiene más votos, sino que es una batalla que se decide estado a estado. 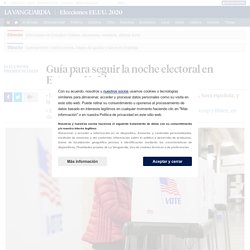 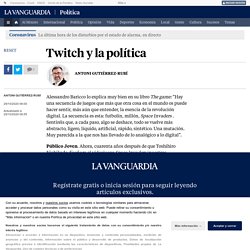 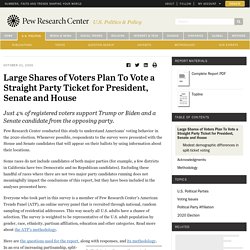 Whenever possible, respondents to the survey were presented with the House and Senate candidates that will appear on their ballots by using information about their locations. Some races do not include candidates of both major parties (for example, a few districts in California have two Democratic and no Republican candidates). Excluding these handful of races where there are not two major party candidates running does not meaningfully impact the conclusions of this report, but they have been included in the analyses presented here. Everyone who took part in this survey is a member of Pew Research Center’s American Trends Panel (ATP), an online survey panel that is recruited through national, random sampling of residential addressees. This way nearly all U.S. adults have a chance of selection. Here are the questions used for the report, along with responses, and its methodology. Election polling panic: Biden is in a much better position than Clinton was. The 2020 election is coming down to the wire, and millions of Americans are freaking out.

They’re afraid President Donald Trump will surge at the end and win, as he did in 2016. But there are good reasons to think that won’t happen, based on measurable differences between the two elections. Joe Biden is in a much better position than Hillary Clinton was. Twitch y la política, por Antoni Gutiérrez-Rubí. Mainstream media is the biggest amplifier of White House disinformation. Benkler’s team just published its study, which examines the president’s disinformation campaign against mail-in votes and details the methods—and people—he’s using to accomplish his goals. The findings found that some of the biggest names in American mass media and the political elite are primarily responsible, and that social media plays only a secondary role. The findings run contrary to the popular idea that it’s foreign troll factories doing the worst disinformation dirty work.

The study examined 55,000 media stories, 5 million tweets, and 75,000 Facebook posts. The conclusion, echoing their research from 2015 to 2018, is that Donald Trump and Fox News are the key players in this crucial disinformation campaign, not Russian trolls. Inside the White House Event Now Under Covid-19 Scrutiny. At least seven people who attended a White House event on Sept. 26 have since tested positive for the coronavirus. Six of them, including the first lady, sat in the first several rows of a nomination ceremony for Judge Amy Coney Barrett in the White House Rose Garden. The seventh was the president himself. Few people at the outdoor ceremony wore masks or kept their social distance.

But experts say the more risky time spent that day was at a reception inside the White House, where President Trump met with a smaller group of guests. There, Mr. Presidential Illnesses Have Changed the Course of World History. In the Yalta Declaration, the three leaders set the stage—or so Roosevelt thought—for the postwar world. They agreed to Stalin’s request to divvy up Germany, Roosevelt’s dream of the United Nations, and to ceding chunks of Asia to the Soviet sphere. The most sensitive point was the fate of Eastern Europe after liberation from the Nazis. Trump Didn’t Disclose First Positive Covid-19 Test While Awaiting a Second Test on Thursday. El acto en el que Trump nombró a Barrett deja un reguero de contagios.

Which makes him precisely the wrong person to be at the center of an international crisis. Coronavirus: 'I’ll be back, I think I’ll be back soon,' says Trump – as it happened. Reuters: So far, markets have been comparatively sanguine in response to Trump’s diagnosis: hopes of a breakthrough in talks among US lawmakers on another stimulus package took the edge off a stock market selloff on Friday, with the S&P 500 losing less than 1% and so-called safe-haven assets seeing limited demand. News of Trump’s hospitalisation at a military medical center outside Washington, where he remained on Saturday, came after trading ended on Friday. Many investors are concerned, however, that a serious decline in Trump’s health less than a month before Americans go to the polls could roil a US stock market that recently notched its worst monthly performance since its selloff in March while causing turbulence in other assets.

El coronavirus y la amenaza dentro de la Casa Blanca. The contrast between Trump’s airy dismissals of the pandemic’s severity and the profound pain and anxiety endured by so many Americans has helped define the era in which we live. Hours before he announced the diagnosis, Trump claimed, in a speech recorded for the annual Al Smith Dinner for Catholic charities, that “the end of the pandemic is in sight, and next year will be one of the greatest years in the history of our country.”

Any ailing individual ought to be able to depend on the best wishes of others—and on affordable, decent health care. Trump can depend on both, even if millions of Americans cannot. We can only hope that he and his wife get through the virus in a couple of weeks with minimal suffering, and, with prime medical attention and a modicum of luck, there’s reason to think that they will. In terms of scale, the West Wing is less like the Kremlin or the Élysée Palace than like the cramped executive offices of a medium-sized insurance company.

(A number of developed countries like Australia, Britain and Canada as well as populous India had fewer reported cases at that point.) By March 12, when the tally had again increased tenfold to over 1,200, the president argued that too was “very few cases” compared to other countries. He has also misleadingly suggested numerous times that the coronavirus is no worse than the flu, saying on Friday, “You call it germ, you can call it a flu. Trump's COVID diagnosis may not be known if it weren't for the media.

It's easy to dog the media. But stop for a second and reflect on everything we know thanks to the media — and often the media alone. Driving the news: It was the media that gave light to the negligence of White House officials in containing the coronavirus. Trump’s Covid-19 Diagnosis Reshapes Election a Month From Vote. The Coronavirus and the Threat Within the White House. Commission on Presidential Debates wants "additional structure" for remaining debates. Six Takeaways From the First Presidential Debate. 5 facts about presidential and vice presidential debates. CNN's Dana Bash on first debate: 'That was a s. 2020 debate: Four things we learned from the first Trump-Biden showdown.

As Fox News Played Down the Coronavirus, Its Chief Protected Himself. White Supremacists Considered Using Coronavirus As Bioweapon. Rupert Murdoch Put His Son in Charge of Fox. It Was a Dangerous Mistake. White supremacists encouraging their members to spread coronavirus to cops, Jews, FBI says. Un nacionalista blanco se ha rebautizado como experto en coronavirus. Y las personas acuden a él. A White Nationalist Has Rebranded Himself as Coronavirus Expert. And People Are Flocking to Him. Disinformation and scapegoating: how America's far right is responding to coronavirus.

The 2020 presidential campaigns aren't ready for deepfakes - Axios. Which issues Democratic presidential candidates are talking about on Twitter, Facebook and Instagram - Washington Post. Why Harris And O’Rourke May Have More Upside Than Sanders And Biden. The 5 Corners Of The 2020 Democratic Primary.