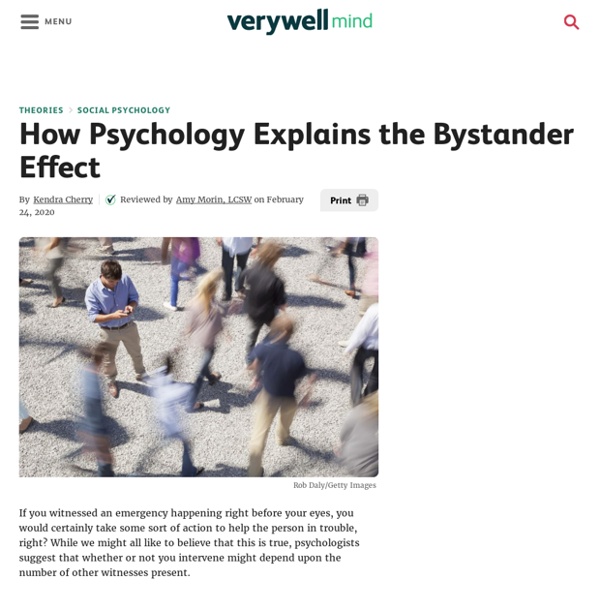 If you witnessed an emergency happening right before your eyes, you would certainly take some sort of action to help the person in trouble, right? While we might all like to believe that this is true, psychologists suggest that whether or not you intervene might depend upon the number of other witnesses present. What Is the Bystander Effect? The term bystander effect refers to the phenomenon in which the greater the number of people present, the less likely people are to help a person in distress. When an emergency situation occurs, observers are more likely to take action if there are few or no other witnesses. Being part of a large crowd makes it so no single person has to take responsibility for an action (or inaction). In a series of classic studies, researchers Bibb Latané and John Darley found that the amount of time it takes the participant to take action and seek help varies depending on how many other observers are in the room. The Kitty Genovese Case

The 21st century bystander effect happens every day online If you’re going to fall, injure yourself and need help, where is a good place to do it? Should you choose a busy thoroughfare or a deserted backstreet? Statistics and experiments in social psychology will tell you that if you need help, you should avoid dropping in a busy street, even if hundreds of people are passing through. This is because of a phenomenon known as the bystander effect. The more individuals gathered in one place, the less chance there is of one of them coming to the aid of a person in need.

A New Look at the Killing of Kitty Genovese: The Science of False Confessions On March 13, 1964 a woman named Catherine “Kitty” Genovese was murdered outside of her apartment in Queens, New York. Over the course of a brutal attack lasting over 30 minutes, Genovese was stabbed at least 14 times. It was widely reported that despite Genovese’s screams for help, not a single one of the 38 bystanders at the apartment that night came to her aid. The case caught the attention of the public, as well as psychological scientists, leading to research on the “bystander effect.”

Bystander effect: Famous psychology result could be completely wrong By Grace Browne SolStock/Getty If you were being attacked, would anyone stop to help you? How to Break the Bystander Effect They could have left it to someone else. An Army veteran blocked a shooter in Oregon from entering his classroom. Three friends on a high-speed train from Paris to Amsterdam helped stop a gunman wielding an AK-47. This past spring, an Army captain in North Carolina pulled a couple to safety after a fiery car crash.

These heroes reach out from home amid Covid-19 pandemic, Singapore News One developed a website to give hawker stalls a greater online presence. Another held a film screening and post-session discussions online to recapture the communal experience of cinema. The Sunday Times speaks to five groups who have responded to circuit breaker measures in creative ways that have made Singaporean lives a tad better. Hosting a 'watch party' to give film lovers, local distributors a boost How to Overcome the Bystander Effect Psychologists have long been interested in exactly why and when we help other people. There has also been a tremendous amount of interest in the reasons why we sometimes don't help others. The bystander effect is a social phenomenon that occurs when people fail to help those in need due to the presence of other people. In many cases, people feel that since there are other people around, surely someone else will leap into action.1

Man slashed & robbed at Tanglin Halt claims witnesses "did nothing to help" - Mothership.SG - News from Singapore, Asia and around the world A 58-year-old man was recently arrested for his suspected involvement in a case of armed robbery. On Oct. 13, the suspect slashed another man with a fruit knife near Tanglin Halt Road, and managed to get away with the victim's mobile phone as well. The suspect was arrested on the same day and was subsequently charged in court two days after the incident. 37 Who Saw Murder of Kitty Genovese Didn't Call the Police; Apathy at Stabbing of Queens Woman Shocks Inspector The man explained that he had called the police after much celiberation. He had phoned a friend in Nassau County for advice and then he had crossed the roof of the building to the apartment of the elderly woman to get her to make the call. “I didn't want to get involved,” he sheepishly told the police. Six days later, the police arrested Winston Moseley, a 29year‐old business-machine operator, and charged him with the homicide.

How to Break the Bystander Effect They could have left it to someone else. An Army veteran blocked a shooter in Oregon from entering his classroom. Three friends on a high-speed train from Paris to Amsterdam helped stop a gunman wielding an AK-47. This past spring, an Army captain in North Carolina pulled a couple to safety after a fiery car crash.

The Bystander Effect: Reactions and Causes - PSYCHROD Bystander Effect: Reactions and Causes The bystander effect is an element of social psychology that implies that when the number of bystanders is increased in an emergency situation, the less likely any of the bystanders will aid, or assist in the situation (Aronson, Wilson, & Akert, 2013). The bystander effect is one of the most significant well established social psychology findings, which manifested in the late 1960’s (Levine & Crowther, 2013). The cause for social psychologist to begin to study how bystanders react during emergency situations, was due to Kitty Genovese being attacked and murdered in front of her Queens, New York apartment in 1964 (Aronson et al., 2013). The Bystander Effect is about more than the diffusion of responsibility Inspired by the shocking murder of a woman in New York in 1964, reportedly in front of numerous witnesses who did nothing to help (although this was exaggerated), the Bystander Effect is a well-researched phenomenon that describes the diminishing likelihood that any one person will help as the number of other people available to help increases. The most popular and widely researched explanation is that people experience a diffusion of responsibility when in the company of other bystanders. We don’t help the person who is being assaulted in a busy street because we assume that someone else will. But a new study in the Journal of Experimental Psychology: General provides evidence that there is much more to it than this – in particular, when deciding whether to help, we take into account the perspective of the other bystanders – whether they know that help is needed, whether they know that we know that help is needed, whether they know that we know they know that help is needed, and so on.