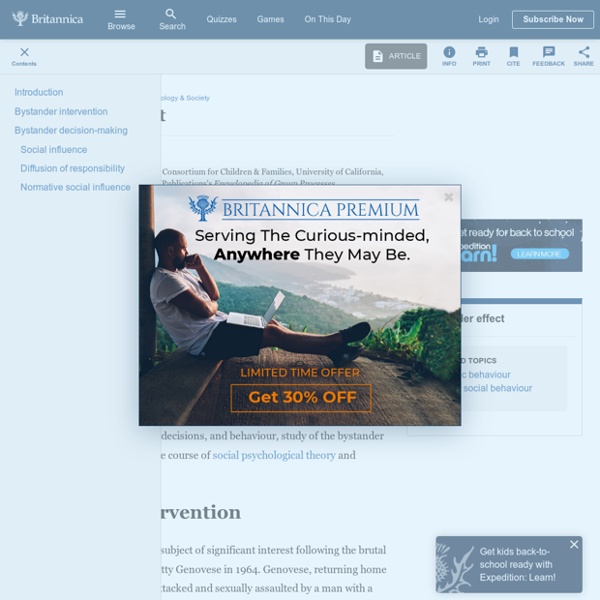 Bystander effect, the inhibiting influence of the presence of others on a person’s willingness to help someone in need. Research has shown that, even in an emergency, a bystander is less likely to extend help when he or she is in the real or imagined presence of others than when he or she is alone. Moreover, the number of others is important, such that more bystanders leads to less assistance, although the impact of each additional bystander has a diminishing impact on helping. Investigations of the bystander effect in the 1960s and ’70s sparked a wealth of research on helping behaviour, which has expanded beyond emergency situations to include everyday forms of helping. By illuminating the power of situations to affect individuals’ perceptions, decisions, and behaviour, study of the bystander effect continues to influence the course of social psychological theory and research. Bystander intervention Get exclusive access to content from our 1768 First Edition with your subscription.

Countering Pluralistic Ignorance - Asking the right questions at the right time in the right way Picture this: You're in an important meeting with senior leadership. The CEO is sharing the firm's strategic plan, including how the company will "leverage big data to gain visibility into market opportunities producing measurable ROI". Um...what? You do a quick scan around the conference room.

Bystander Effect Bystander Effect Definition Individuals who see or hear an emergency (but are otherwise uninvolved) are called bystanders. The bystander effect describes the phenomenon in which such individuals are less likely to seek help or give assistance when others are present. This does not mean that bystanders are apathetic to the plight of others, for bystanders often show signs of distress, anxiety, and concern if they delay responding or fail to respond at all. It also does not necessarily mean that a victim will be less likely to receive help as the number of bystanders present increases—after all, the greater the number of other people present, the greater is the likelihood that at least one of them will intervene. In the event of a medical emergency, for instance, a larger group of bystanders is more likely to contain someone trained to administer appropriate first-aid measures.

Why and How Do We Help? Source: Bystander effect research was stimulated, in part, by the infamous case of a young woman named Kitty Genovese, who was raped and murdered on the streets of Queens, NY. The crime happened late one night when Genovese's neighbors reportedly stood by and did nothing to intervene in the brutal attack despite hearing her screams. Many introductory psychology classes still use this case to illustrate the bystander effect. Because the story was so widely told to hundreds of thousands of psychology students, and accepted as fact by virtually all professors teaching about the case, it might surprise you to learn that the details of the story weren't 100% accurate.

Researchers Found the ‘Bystander Effect’ in 5-Year-Olds Photo: MGM/The Kobal Collection The “bystander effect” is one of the better-documented and more unfortunate aspects of human nature. As Psychology Today sums it up, the effect “occurs when the presence of others hinders an individual from intervening in an emergency situation.” Global Warming Not too long ago, I was preparing a lecture about group dynamics for my students at Delft University of Technology. One of the dynamics I wanted to introduce was the bystander effect. The bystander effect refers to the phenomenon that an individual’s likelihood of offering help in a critical situation decreases when passive bystanders are present (e.g., Darley & Latané, 1968). The murder case of Kitty Genovese is considered as the iconic real-life example of the bystander effect. Psychology textbooks all over the world describe how in 1964 a young woman was raped and murdered in New York while dozens of neighbours looked on but did not come into action to help her (e.g., Manning, Levine, & Collins, 2007).

We Are All Bystanders For more than 40 years, Peggy Kirihara has felt guilty about Stewart. Peggy liked Stewart. They went to high school together. Their fathers were friends, both farmers in California’s Central Valley, and Peggy would always say “hi” when she passed Stewart in the hall. Yet every day when Stewart boarded their school bus, a couple of boys would tease him mercilessly. The 21st century bystander effect happens every day online If you’re going to fall, injure yourself and need help, where is a good place to do it? Should you choose a busy thoroughfare or a deserted backstreet? Statistics and experiments in social psychology will tell you that if you need help, you should avoid dropping in a busy street, even if hundreds of people are passing through. This is because of a phenomenon known as the bystander effect.

Bystander Effect: What Is It and What You Can Do About It What the bystander effect looks like A little after 3 a.m. on March 13, 1964, Catherine “Kitty” Genovese parked her car and walked to her apartment in Queens, New York, after finishing her shift as a bar manager. Serial killer Winston Moseley was out to victimize someone that night. Genovese became his target. Remembering Kitty Genovese In death, Kitty Genovese has cast a long shadow over America’s psyche, far more than she probably would have had her life not been brutally cut short at age 28. Across the decades since her murder in 1964, she has endured as a symbol of urban disconnection and apathy, a victim not only of a knife-wielding killer but of bystanders’ unwillingness to get involved in resisting evil. The New York Times had a pivotal role in creating what is referred to as “Kitty Genovese syndrome.” A front-page article in March 1964 described how 38 of her neighbors heard her screams and watched, yet did nothing, while she was twice attacked and stabbed repeatedly on her way home from her job as a bar manager in Queens. The facts, however, turned out to be quite different.

Sexual assaults Sexual assault, pushed into public conversation by the #MeToo movement, once again dominates the U.S. news cycle. Supreme Court nominee Brett Kavanaugh faces allegations that he sexually assaulted professor Christine Blasey Ford, a former high school classmate. The allegations have led to a number of important questions regarding victim testimony, the veracity of memory and the justice system in America. However, as social scientists who study sexuality and violence, we found ourselves asking a different question: Where were Kavanaugh and Ford’s classmates during this alleged incident? The role of bystanders Based on Dr.

What Is the 'Bystander Effect' and How Do People Overcome It? This story appeared in the June 2020 issue as "Action!" Subscribe to Discover magazine for more stories like this. On April 9, 2017, three security officers from the Chicago Department of Aviation forcibly removed David Dao from an overbooked United Airlines flight. Dao, a 69-year-old doctor, was dragged down the plane’s aisle after he refused to give up his seat. In the process, his head hit an armrest and he was knocked unconscious. Kitty Genovese The Kitty Genovese murder in Queens, New York, in 1964 is one of the most famous murder cases to come out of New York City and into the national spotlight. What propelled it wasn’t the crime or the investigation, but the press coverage that alleged the murder had many witnesses who refused to come to the Kitty Genovese’s defense. This has been disproved over time, but not before it became part of the accepted lore of the crime. Kitty Genovese was returning from work home at around 2:30 a.m. on March 13, 1964, when she was approached by a man with a knife.