How To Counteract The Bystander Effect - University of Pittsburgh Student EMS 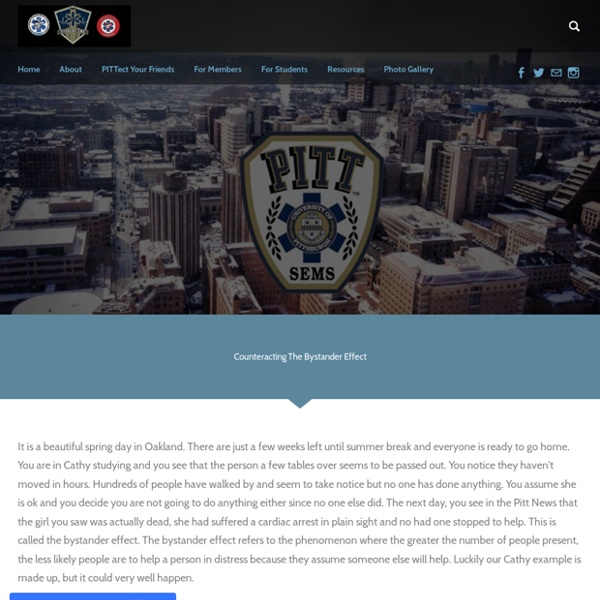 Counteracting The Bystander Effect It is a beautiful spring day in Oakland. There are just a few weeks left until summer break and everyone is ready to go home. You are in Cathy studying and you see that the person a few tables over seems to be passed out. You notice they haven't moved in hours. Hundreds of people have walked by and seem to take notice but no one has done anything. Return To PITTect Your Friends HomePage Create your own unique website with customizable templates. Get Started

10 Notorious Cases of the Bystander Effect The bystander effect is the somewhat controversial name given to a social psychological phenomenon in cases where individuals do not offer help in an emergency situation when other people are present. The probability of help has in the past been thought to be inversely proportional to the number of bystanders. In other words, the greater the number of bystanders, the less likely it is that any one of them will help. This list describes the prototype of the effect and cites nine particularly heinous examples. The Parable of The Good Samaritan First, the prototype of the bystander effect. How to Break the Bystander Effect They could have left it to someone else. An Army veteran blocked a shooter in Oregon from entering his classroom. Three friends on a high-speed train from Paris to Amsterdam helped stop a gunman wielding an AK-47. This past spring, an Army captain in North Carolina pulled a couple to safety after a fiery car crash.

Breaking the silence - preventing harassment and sexual misconduct Be an Active Bystander We can all be bystanders. Every day events unfold around us. At some point, we will register someone in danger. When this happens, we will decide to do or say something (and become an active bystander), or to simply let it go (and remain a passive bystander). When we intervene, we signal to the perpetrator that their behaviour is unacceptable. Man slashed & robbed at Tanglin Halt claims witnesses "did nothing to help" - Mothership.SG - News from Singapore, Asia and around the world A 58-year-old man was recently arrested for his suspected involvement in a case of armed robbery. On Oct. 13, the suspect slashed another man with a fruit knife near Tanglin Halt Road, and managed to get away with the victim's mobile phone as well. The suspect was arrested on the same day and was subsequently charged in court two days after the incident.

Being aware of the Bystander effect shows that if you are in such a situation, just offer the help instead of waiting for others to do so. by philip06 Mar 26