Why we still look away: Kitty Genovese, James Bulger and the bystander effect 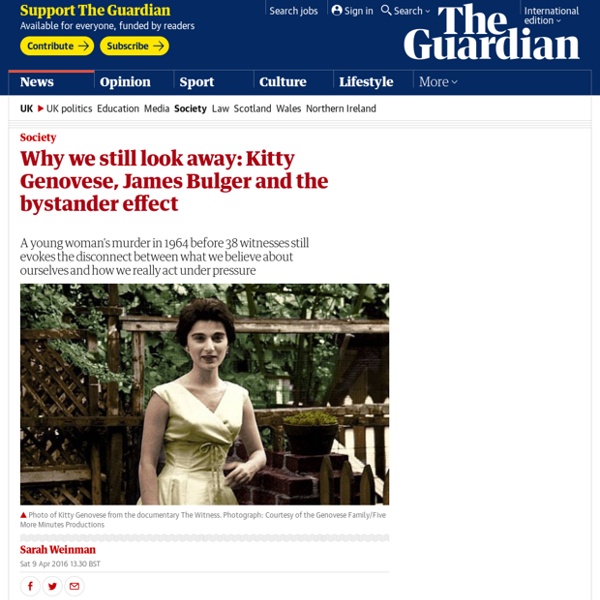 More than half a century later, the death of Kitty Genovese continues to remind us of the disconnect between what we believe about ourselves and how we really act under pressure. The murder of the 28-year-old outside her apartment in the Queens neighborhood of Kew Gardens in the early morning of 13 March 1964 rippled through New York City and around the world. How could a young, independent woman who lived on her own terms be so easily struck down? How could so many neighbors look on and turn away as she was stabbed repeatedly on the street and in her apartment building? What did that collective inability to act reveal about ourselves, our communities, and our belief systems? Genovese’s killer, Winston Moseley, died in prison this week, bringing the case and its implications back into the spotlight. Two weeks after her murder, Rosenthal assigned a story with the damning headline: “Thirty-Seven Who Saw Murder Didn’t Call Police.” Take the story of Hugo Alfredo Tale-Yax.

Bystander Effect: What Is It and What You Can Do About It What the bystander effect looks like A little after 3 a.m. on March 13, 1964, Catherine “Kitty” Genovese parked her car and walked to her apartment in Queens, New York, after finishing her shift as a bar manager. Serial killer Winston Moseley was out to victimize someone that night. Genovese became his target. When he followed her, she ran. As Moseley reached her and began stabbing her with a hunting knife, Genovese screamed, “Oh, my God, he stabbed me!

Remembering Ilan Halimi The murder of four people in the Hyper Cacher kosher store in Paris in January 2015 served as a wake-up call to Europe and much of the world what French Jews had known for a long time: European antisemitism was back, and with a vengeance. This attack, coming on the heels of the Charlie Hebdo atrocity, could no longer be ignored. The vicious hatred for Jews that had been bubbling just under the surface among Europe's Islamist extremists—not to mention the far-right and far-left political fringes—had boiled over. From the beginning of the 2000s, while the Second Intifada was raging, France saw a worrying and rapid rise in public expressions of prejudice and violence against Jews.

New York Today: The City’s Bystander Effect Good morning on this clear Monday. The first time I dialed 911 in New York was on a subway platform at 42nd Street — last week. A woman was bleeding on her head and neck; she had fallen on the stairs between the platform and turnstiles. Some passengers hurried past her. Others stopped to look and moved on. The Bystander Effect: Why it matters for beating cyberbullying If you saw someone being assaulted on the street would you keep on walking assuming someone else would step in or would you help the person in need? The ‘bystander effect’ refers to incidents where an individual in need of help is not assisted by an onlooker because the onlooker assumes that someone else will step in – the implication being that when in a crowd, we do not feel as accountable as we might when alone. Cyberbullying: Dr.

How to Overcome the Bystander Effect Psychologists have long been interested in exactly why and when we help other people. There has also been a tremendous amount of interest in the reasons why we sometimes don't help others. The bystander effect is a social phenomenon that occurs when people fail to help those in need due to the presence of other people. In many cases, people feel that since there are other people around, surely someone else will leap into action.1 While the bystander effect can have a negative impact on prosocial behavior, altruism and heroism, researchers have identified a number of different factors that can help people overcome this tendency and increase the likelihood that they will engage in helping behaviors.2 Some of these include:

What the Kitty Genovese Killing Can Teach Today’s Digital Bystanders As Retro Report notes, two social psychologists in New York, John M. Darley and Bibb Latané, conducted experiments that led them to posit that Ms. Genovese might have survived had there been fewer witnesses. Numbers can inhibit action, they concluded. “You think that if there are many people who are witness to something that other people certainly already have done something — why should it be me?” Dr. The Bystander Effect and Altruism Learning Objectives Explain the factors that influence human altruism, including reciprocal altruism and diffusion of responsibility. Go to YouTube and search for episodes of “Primetime: What Would You Do?” You will find video segments in which apparently innocent individuals are victimized, while onlookers typically fail to intervene.

Psychology of the Bystander and tips for increasing chances of receiving help - Fight Times Magazine Will I intervene? Bystanders must weigh the costs or dangers of intervening. Will I be harmed? Will I be sued? How The Murder Of Kitty Genovese Created The Bystander Effect Wikimedia CommonsKitty Genovese whose muder would inspire the psychological phenomenon known as the bystander effect. At approximately 3:15 a.m. on March 13, 1964, a woman was murdered. Her name was Kitty Genovese. She was 28 years old, “self-assured beyond her years,” and had a “sunny disposition.” However, on that Friday evening, none of that mattered. The Bystander Effect is about more than the diffusion of responsibility Inspired by the shocking murder of a woman in New York in 1964, reportedly in front of numerous witnesses who did nothing to help (although this was exaggerated), the Bystander Effect is a well-researched phenomenon that describes the diminishing likelihood that any one person will help as the number of other people available to help increases. The most popular and widely researched explanation is that people experience a diffusion of responsibility when in the company of other bystanders. We don’t help the person who is being assaulted in a busy street because we assume that someone else will. But a new study in the Journal of Experimental Psychology: General provides evidence that there is much more to it than this – in particular, when deciding whether to help, we take into account the perspective of the other bystanders – whether they know that help is needed, whether they know that we know that help is needed, whether they know that we know they know that help is needed, and so on.

Toddler incident in China shows 'volunteer's dilemma' - CNN A security camera video of a toddler being run over twice on a street in China has swept across the Web in recent days and has drawn a chorus of horrified denunciations. How, we wonder, could so many passers-by have so callously ignored the girl's plight? As humans, we are horrified when we learn that a person in distress is not helped, even when, as in this case, many potential helpers are present.

5 Effective Tips to Overcome the Bystander Effect Do you know about the bystander effect? It's a social dynamic that affects almost everyone when an observed conflict is either ignored or worse, reinforced by the failure to act by those observing. An example of this would be a number of people in a park observing a man trying to take a woman's purse, yet doing nothing to report the crime or to deter the criminal by drawing attention to their actions. The sad fact is that most of us are vulnerable to this condition of non-action; but fortunately, there are things you can do to negate or minimize the impact.

How to Break the Bystander Effect They could have left it to someone else. An Army veteran blocked a shooter in Oregon from entering his classroom. Three friends on a high-speed train from Paris to Amsterdam helped stop a gunman wielding an AK-47. This past spring, an Army captain in North Carolina pulled a couple to safety after a fiery car crash. Were these men instinctively courageous, or had they learned to be?