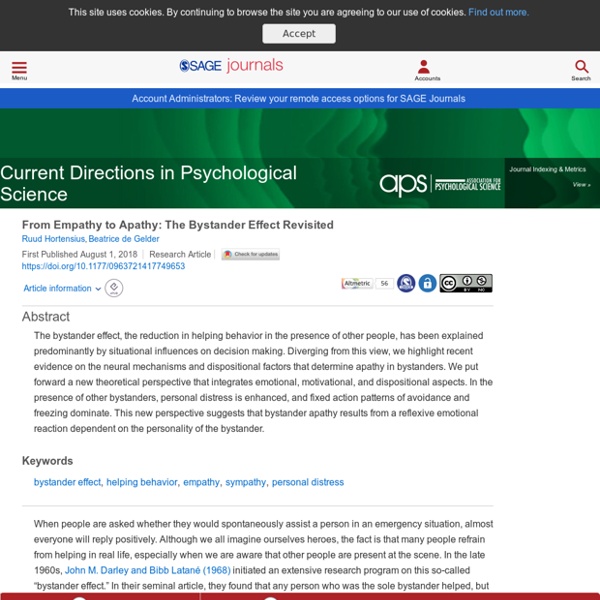 When people are asked whether they would spontaneously assist a person in an emergency situation, almost everyone will reply positively. Although we all imagine ourselves heroes, the fact is that many people refrain from helping in real life, especially when we are aware that other people are present at the scene. In the late 1960s, John M. Darley and Bibb Latané (1968) initiated an extensive research program on this so-called “bystander effect.” In their seminal article, they found that any person who was the sole bystander helped, but only 62% of the participants intervened when they were part of a larger group of five bystanders. Following these first findings, many researchers consistently observed a reduction in helping behavior in the presence of others (Fischer et al., 2011; Latané & Nida, 1981). Neural Mechanisms of Bystander Apathy Can neuroimaging studies inform the investigation of the bystander effect? Fig. 1. Dispositional Influences on Bystander Apathy Fig. 2. Preston, S.

10 Notorious Cases of the Bystander Effect The bystander effect is the somewhat controversial name given to a social psychological phenomenon in cases where individuals do not offer help in an emergency situation when other people are present. The probability of help has in the past been thought to be inversely proportional to the number of bystanders. In other words, the greater the number of bystanders, the less likely it is that any one of them will help. Khaseen Morris: Teen held for killing that bystanders filmed Image copyright Nassau County Police A New York teenager has been charged with the fatal stabbing of a 16-year-old boy whom bystanders filmed bleeding to death. Tyler Flach, 18, is accused of second-degree murder in the deadly after-school brawl that broke out not far from the victim's Long Island school. Police said that most of the "50, 60, 70" kids who witnessed the attack on Khaseen Morris did nothing to stop it.

﻿The Bystander Effect in Emergency Situations Mental Health The Bystander Effect in Emergency Situations By How to Overcome the Bystander Effect Psychologists have long been interested in exactly why and when we help other people. There has also been a tremendous amount of interest in the reasons why we sometimes don't help others. The bystander effect is a social phenomenon that occurs when people fail to help those in need due to the presence of other people. In many cases, people feel that since there are other people around, surely someone else will leap into action.1 While the bystander effect can have a negative impact on prosocial behavior, altruism and heroism, researchers have identified a number of different factors that can help people overcome this tendency and increase the likelihood that they will engage in helping behaviors.2 Some of these include:

What Is Diffusion Of Responsibility And How Does It Show Up In Real Life? By: Joanna Smykowski Updated February 13, 2020 Medically Reviewed By: Lauren Guilbeault Content/Trigger Warning: Please be advised, the below article might mention trauma-related topics that include sexual assault & violence which could potentially be triggering. Source: pexels.com The bystander effect is being made worse by people filming violent events on their smartphones On April 9, 2017, a video of a man being dragged off a United Airlines flight was posted on the internet and went viral. But I don’t need to tell you that. Each of your most outspoken Facebook friends probably posted about the event, highlighting the aspects of it that best reinforced their worldview. The incident was covered all over American media and even sparked outrage in China. The collective focus may have now moved on to its next source of outrage, but there was something that only a few people noticed in the moment: a plane full of quiet passengers.

5 Effective Tips to Overcome the Bystander Effect Do you know about the bystander effect? It's a social dynamic that affects almost everyone when an observed conflict is either ignored or worse, reinforced by the failure to act by those observing. An example of this would be a number of people in a park observing a man trying to take a woman's purse, yet doing nothing to report the crime or to deter the criminal by drawing attention to their actions. The sad fact is that most of us are vulnerable to this condition of non-action; but fortunately, there are things you can do to negate or minimize the impact.

The Bystander Effect: Reactions and Causes - PSYCHROD Bystander Effect: Reactions and Causes The bystander effect is an element of social psychology that implies that when the number of bystanders is increased in an emergency situation, the less likely any of the bystanders will aid, or assist in the situation (Aronson, Wilson, & Akert, 2013). The bystander effect is one of the most significant well established social psychology findings, which manifested in the late 1960’s (Levine & Crowther, 2013). The cause for social psychologist to begin to study how bystanders react during emergency situations, was due to Kitty Genovese being attacked and murdered in front of her Queens, New York apartment in 1964 (Aronson et al., 2013). Kitty’s unfortunate attack lasted nearly 45 minutes and was witnessed by nearly 38 residents who did not assist by calling police, or trying to stop her attacker (Aronson et al., 2013).

New York Today: The City’s Bystander Effect Good morning on this clear Monday. The first time I dialed 911 in New York was on a subway platform at 42nd Street — last week. A woman was bleeding on her head and neck; she had fallen on the stairs between the platform and turnstiles. Some passengers hurried past her. Others stopped to look and moved on. Diffusion of Responsibility: Definition, Characteristics & Factors Diffusion of responsibility is defined as a psychological phenomenon in a social setting. Sometimes when an individual is in a group, he will hesitate to take any action as others are also present. This inaction and the inability to take responsibility is a type of attribution as he assumes that others are more liable to take action. This is called diffusion of responsibility and is often seen in the majority of people. It is also termed as a bystander effect as the people in the group stand like bystanders without offering any help to the person in need. Most In-depth Marketing and Digital Marketing Courses

Digital bystanders are a modern-day issue - The Signal While on your way to Classroom South, an argument breaks out right in front of you between two people. The argument then escalates into a fistfight, and you continue to stand there and observe. At that moment, you were a bystander. A bystander is a person who is present at an event or incident but does not take part.. Being a bystander can often lead to something called the bystander effect, which occurs when no one witnessing an event does anything to help because they see that others aren’t helping or assume in their head that those people have already helped.