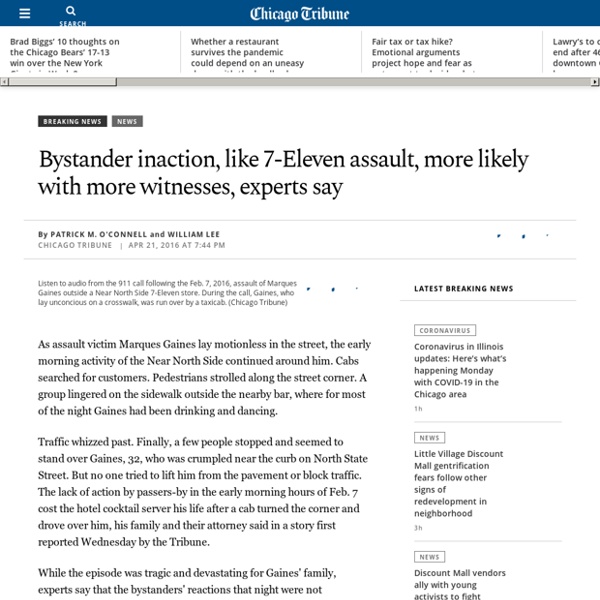 TODAYonline I refer to the news reports of the fatal traffic accident on Sunday (Dec 29) at Lucky Plaza. I applaud the Good Samaritans who unselfishly helped to lift up the car, pulled the victims out and attended to them. These are acts of true heroism. Everyone's Confused In Meetings But No One Asks Questions - Here's What Needs to Change Picture this: You're in an important meeting with senior leadership. The CEO is sharing the firm's strategic plan, including how the company will "leverage big data to gain visibility into market opportunities producing measurable ROI". Um...what? You do a quick scan around the conference room. Heads nod in agreement as the CEO concludes. Remembering Kitty Genovese In death, Kitty Genovese has cast a long shadow over America’s psyche, far more than she probably would have had her life not been brutally cut short at age 28. Across the decades since her murder in 1964, she has endured as a symbol of urban disconnection and apathy, a victim not only of a knife-wielding killer but of bystanders’ unwillingness to get involved in resisting evil. The New York Times had a pivotal role in creating what is referred to as “Kitty Genovese syndrome.” A front-page article in March 1964 described how 38 of her neighbors heard her screams and watched, yet did nothing, while she was twice attacked and stabbed repeatedly on her way home from her job as a bar manager in Queens. The facts, however, turned out to be quite different. Yes, some neighbors had ignored Ms.

Remembering Ilan Halimi The murder of four people in the Hyper Cacher kosher store in Paris in January 2015 served as a wake-up call to Europe and much of the world what French Jews had known for a long time: European antisemitism was back, and with a vengeance. This attack, coming on the heels of the Charlie Hebdo atrocity, could no longer be ignored. The vicious hatred for Jews that had been bubbling just under the surface among Europe's Islamist extremists—not to mention the far-right and far-left political fringes—had boiled over. The 21st century bystander effect happens every day online If you’re going to fall, injure yourself and need help, where is a good place to do it? Should you choose a busy thoroughfare or a deserted backstreet? Statistics and experiments in social psychology will tell you that if you need help, you should avoid dropping in a busy street, even if hundreds of people are passing through. This is because of a phenomenon known as the bystander effect. The more individuals gathered in one place, the less chance there is of one of them coming to the aid of a person in need.

A New York student was fatally stabbed while onlookers took a video of his suffering Tyler Flach is charged with second-degree murder in the death of 16-year-old Khaseen Morris, killed after a fight at a strip mall near Oceanside High School on Monday in Nassau County, New York. Flach was remanded into custody and is due back in court Monday, according to Brendan Brosh, a spokesman for the Nassau County District Attorney. Defense attorney Edward Sapone said Flach maintains his innocence. When the fight broke out Monday, a group of 50-70 teenagers looked on as Morris was assaulted and stabbed in the chest, according to Detective Lt.

An avoidable murder of a student caught on tape: the sickening power of the bystander effect On Sept. 17, the life of a 16-year-old high schooler in Long Island ended tragically in a violent brawl outside a strip mall. Khaseen Morris was told to show up outside the mall at a certain time by several others his age, after he was seen walking home the girlfriend of another boy. Morris showed up and was immediately attacked by a group of five teenagers. A senseless brawl erupted and Morris was stabbed repeatedly in the chest, dying later that night in the hospital. The tragedy of Morris’s murder extends beyond the senselessness of his violent death and the fact that an innocent young life ended so abruptly over a trivial adolescent dispute.

Singapore bystander CPR rate 'extremely low', Health News SINGAPORE - Wedneday's report ("Motorcyclist, 38, dies in Braddell Road accident") about a 19-year-old student who performed cardiopulmonary resuscitation (CPR) on a road accident victim clearly demonstrates that people are prepared to help others in need and try to save lives. The student's actions should be highly commended. Providing bystander first aid in the form of CPR, using an automated external defibrillator (AED) and trying to stem external bleeding are all forms of positive action meant to save lives. These may not always result in lives saved, but people in cardiac arrest who get prompt bystander CPR are two to three times more likely to survive than those who do not receive such help. Learning CPR gives us that vital basic skill to help us save lives.