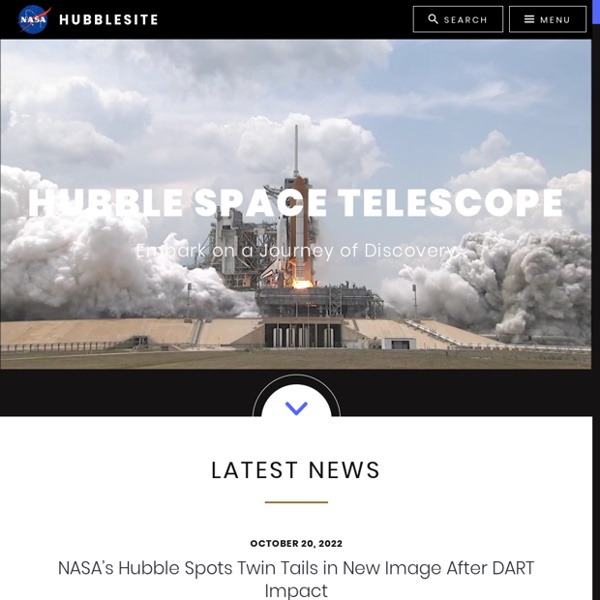 7 Space Simulators That Let You Explore the Universe Why should Mars rovers have all the fun? If you're tired of standing by while Curiosity rolls around up there, it's time to head out on the open exosphere and explore the universe for yourself — digitally, of course. SEE ALSO: 10 Must-Follow Tumblrs for Science Lovers A handful of excellent space simulators use real astronomical data to re-create the known universe in three dimensions. People: Featured People: Carl Sagan Carl Sagan played a leading role in the American space program from its very beginning. He was a consultant and adviser to NASA beginning in the 1950s -- he briefed the Apollo astronauts before their flights to the Moon. Carl was born in New York City on November 9, 1934.

Anne’s Astronomy News November 30, 2012 SNR 0509-67.5, a supernova remnant in the LMC Image Credit: X-ray: NASA/CXC/SAO/J.Hughes et al, Optical: NASA/ESA/Hubble Heritage Team (STScI/AURA) SNR 0509-67.5 (SNR 0509 for short) is the remnant of a supernova explosion in the Large Magellanic Cloud, located some 160,000 light-years away in the constellation of Dorado. It is about 23 light-years across and expanding at more than 5,000 kilometers a second, or more than 18 million kilometers an hour. Deep Impact NASA's Deep Impact probe hits Comet Tempel 1 (NASA) Deep Impact is the name of a NASA space mission whose primary objective was to study Comet Tempel 1 (a.k.a. 9P/Tempel). It was launched on 12 January, 2005, and the smart impactor crashed into the comet on 4 July, 2005.

No One Wants to Live in My 'Elysium'-Style Simulation Orbital Space Colony They will also be a pain in the ass to run. And I speak from experience on this because I briefly governed my own orbital colony. My time in command did not end well. Joe Strout gave me the opportunity to fail. A software engineer with a huge background in creating complex simulations, Strout is the creator of High Frontier, which seeks to translate the mechanics of the SimCity series into a vacuum. Arguably the most realistic simulation ever made of building and operating a fully functional orbital space colony, High Frontieris also a highly infuriating exercise in failure created by someone devoted to and fascinated by the real dynamics of life in space. l'univers et ses mystères au COMPLET en haute definition Les plus grandes explosions HD 720p / Nouveau documentaire science complet en francais by DocMeFiLDraGoN3 47,053 views Documentaire science issu de : l'univers et ses mystères ceci est l'episode 47Science documentary : the universe and its mysteries this is episode 47 Full documentary subscribe and like please thx With all the documentaries available on my channel, you can learn more about astronomy, space, time, matter and many answers to questions that may arise are all like: is it possible to see black holes, and then how the big bang emerged from the first moment (because that triggered ca can not be a supreme deity) scientists will tell you (the majority), the role of supernovae, constellations , nebulae, the speed of light, the moon, the galaxy, the Milky Way, the solar system, atoms, dark matter, dark energy (black), gravity (gravity), asteroids, stars, star clusters, the discoveries of Albert Einstein, the hubble satellite imagery and many others .

Galleries - NASA Solar System Exploration National Aeronautics andSpace Administration Solar System Exploration beta Galleries ShareEmailPrint What's in the heart of a comet? What's in the heart of a comet? A comet's nucleus, or heart, is the solid chunk of something in the center of its fuzzy coma. As it approaches the Sun, some of its surface boils off and creates a long tail. But what IS inside a comet's nucleus? Marshmallows?

Astronomy Picture of the Day Discover the cosmos! Each day a different image or photograph of our fascinating universe is featured, along with a brief explanation written by a professional astronomer. 2016 April 15 Apollo 11-17 First man on the Moon - Apollo Moon Landings - QTVR photos from panoramas.dk Less known is that during all the missions they made image sequences which with today's computer technics can be stitched together into 360o interactive panoramas giving you the possibility to view the moon almost as you were there. Many of these panoramas have been published before but in low resolution and displayed in small sizes. Film used on the Moon was a modified Kodak Ectachrome 160. During the last years (2000-2005) the original films have been re-scanned in high resolution and the Apollo 11 images were released the week before the 35 year anniversary. I can now present you for the first time the Moon in interactive 360 degree full screen Quicktime VR. Stitching these images to make 360 degree panoramas is a difficult task as the astronauts did not know anything about interactive panoramas and the stitching methods which would come 25 years later.

ISS HD Earth Viewing Experiment Black Image = International Space Station (ISS) is on the night side of the Earth. No Audio = Normal. There is no audio by design. Add your own soundtrack. For a display of the real time ISS location plus the HDEV imagery, visit here: The High Definition Earth Viewing (HDEV) experiment aboard the ISS was activated April 30, 2014.