A growing percentage of human activity will, within a measurable time period, be driven by AI algorithms. But these algorithms, being mathematical interpretations of observed data, do not explain the underlying reality that produces them. Paradoxically, as the world becomes more transparent, it will also become increasingly mysterious. Bot or not. Je turing V2. Mémoire "machine/soûl" Controverses sur l’émotion. Personal Robots Group. “The Huggable”: Static Display of V2 Huggable Prototype. 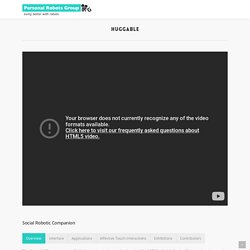 “The Huggable”: Interactive Demonstration of Second Generation Prototype at the “Our Cyborg Future?” Low-cost USB Rubber Ducky pen-test tool for $3 using Digispark and Duck2Spark. It’s a story as old as time: some hacker sees nice hardware pen-testing tool, hacker recoils in horror at the price of said tool, hacker builds their own version for a fraction of the price. 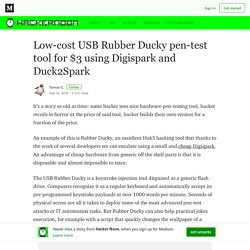 An example of this is Rubber Ducky, an excellent Hak5 hacking tool that thanks to the work of several developers we can emulate using a small and cheap Digispark. An advantage of cheap hardware from generic off the shelf parts is that it is disposable and almost impossible to trace. Wevolver. Forme mem. Idée plan/axe (WIP) ATTACK THE SUN (teaser). Créé par Gwendal Sartre & Fabien Zocco.

Intelligent Agent System for Human-Robot Interaction through Artificial Emotion. Emotions in Social Interactions: Unfolding Emotional Experience. Evaluation of Affective Interactive Applications. Principalism: A Method for the Ethics of Emotion-Oriented Machines. Editorial: ‘Ethics and Good Practice’ – Computers and Forbidden Places: Where Machines May and May Not Go. 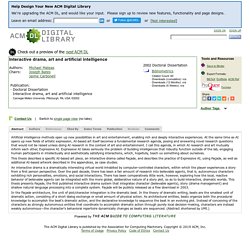 At the same time as AI opens up new fields of artistic expression, AI-based art itself becomes a fundamental research agenda, posing and answering novel research questions that would not be raised unless doing AI research in the context of art and entertainment. I call this agenda, in which AI research and art mutually inform each other, . Expressive AI takes seriously the problem of building intelligences that robustly function outside of the lab, engaging human participants in intellectually and aesthetically satisfying interactions, which, hopefully, teach us something about ourselves.

Forget the Turing and Lovelace tests on artificial intelligence: I want to see a robot pass the Frampton Test. 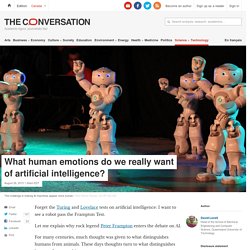 Let me explain why rock legend Peter Frampton enters the debate on AI. For many centuries, much thought was given to what distinguishes humans from animals. These days thoughts turn to what distinguishes humans from machines. The British code breaker and computing pioneer, Alan Turing, proposed “the imitation game” (also known as the Turing test) as a way to evaluate whether a machine can do something we humans love to do: have a good conversation. If a human judge cannot consistently distinguish a machine from another human by conversation alone, the machine is deemed to have passed the Turing Test.

Initially, Turing proposed to consider whether machines can think, but realised that, thoughtful as we may be, humans don’t really have a clear definition of what thinking is. Could a machine or an AI ever feel human-like emotions ? Computers are undergoing a profound mutation at the moment. 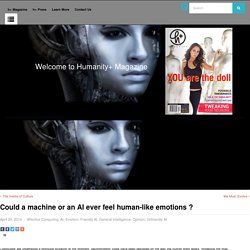 Neuromorphic chips have been designed on the way the human brain works, modelling the massively parallel neurological processeses using artificial neural networks. This will enable computers to process sensory information like vision and audition much more like animals do. Considerable research is currently devoted to create a functional computer simulation of the whole human brain. The Human Brain Project is aiming to achieve this for 2016. Will AI ever understand human emotions? How would you feel about getting therapy from a robot? 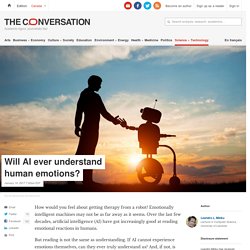 Emotionally intelligent machines may not be as far away as it seems. Over the last few decades, artificial intelligence (AI) have got increasingly good at reading emotional reactions in humans. But reading is not the same as understanding. If AI cannot experience emotions themselves, can they ever truly understand us? Should we build robots that can feel human emotions? I recently wrote an article for Scientific American called 'Robots with Heart'. 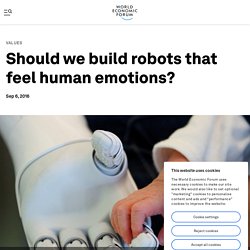 In the piece, I described our work into incorporating an 'empathy module' into robots in order for them to better serve the emotional and physical needs of humans. While many readers offered ideas on how we might apply these empathetic robots to medical or other applications, some objected to the very idea of making robots recognize and empathize with human emotions. One reader opined that, as emotions are what make humans human, we really should not build robots with that very human trait and take over the care-giving jobs that humans do so well. On the other hand, there are others who are so enthusiastic about this very idea that they ask me, "If robots are intelligent and can feel, will they one day have a conscience? " A Large Robotic Arm Futilely Tries to Clean a Blood Red Mess in the Art Installation 'Can’t Help Myself' Replika. Mimus — ATONATON. Each detected person is tracked and assigned attributes as they move around the space. 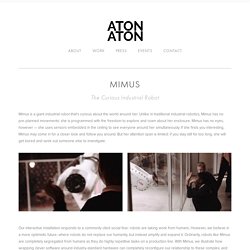 Some attributes are explicit — like position, age, proximity, height, and area — and other attributes are implicit — like activity level and engagement level. Mimus uses these attributes to find the "most interesting person" in her view. Our software dynamically weight these attributes so that, for example, on one day Mimus may favor people with lower heights (e.g., kids) and on another day, Mimus may favor people who have the greatest age (i.e., people who have been at the installation the longest). Once a person grabs Mimus's attention, they have to work to keep it: once they are no longer the most interesting person, Mimus will get bored and go find someone else to investigate. The second software layer runs directly on the robot’s onboard computer. Emotion-Oriented Systems. Emotion pervades human life in general, and human communication in particular, and this sets information technology a challenge. 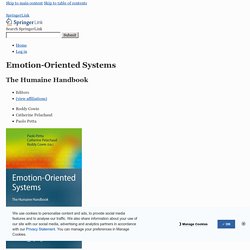 Traditionally, IT has focused on allowing people to accomplish practical tasks efficiently, setting emotion to one side. That was acceptable when technology was a small part of life, but as technology and life become increasingly interwoven we can no longer ask people to suspend their emotional nature and habits when they interact with technology. [1706.09554] The Relationship Between Emotion Models and Artificial Intelligence. Yo. Artificial Intelligence - CES 2020. Atelier Technique Code Créatif. 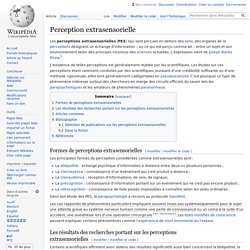 Humanpedia - partager - sharing - wikipedia - david guez. Interface-Z - Programmation de mouvements, percussions, lumieres - Interface-Z. Confort moderne. The Averty Show. Rewarding Disobedience Defiance / Disobedience for the good of all. Engagement with other people is critical, said journalist and author Masha Gessen. “It is really important to talk with people who affirm your reality. But if that’s all you’re getting, then you’re not actually engaging with reality. I think we have to accept a level of discomfort for ourselves, too.” Esra’a Al Shafei, another Defiance speaker, is a Bahraini activist and founder of Majal.org, a network of online platforms that amplify marginalized voices. “Defiance goes beyond dissent,” she said. While Vargas focused on issues of today, the next session again drew from examples of defiance in history, and also considered the tensions between science and faith.

Meet the world's first android actress. Chrome Experiments. Usher - #Chains #Dont Look Away. Glasses That Confuse Facial Recognition Systems Are Coming to Japan. Image: National Institute of Informatics We might soon be living in a world where advertisers exploit facial recognition technology to target us with customized ads in streets. Or, according to the researchers at Japan’s National Institute of Informatics (NII), where our photographs are snapped by surveillance or smartphone cameras equipped with facial recognition, and leaked onto public social networks for all to see.

But a new “privacy visor” created by NII researchers could help wearers protect their anonymity by blocking out any pesky facial recognition systems. The glasses will hit shelves in Japan in 2016, and are expected to cost around ¥30,000 ($240). The tech behind the visor is pretty simple. According to a press release from the NII, this time around, the researchers are attaching a novel material (they don’t mention what exactly it is) to the visors. Cool Japan is a column about the quirky and serious happenings in the Japanese scientific, technological and cultural realms.