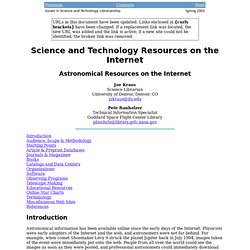 Stellarium. N.A.A.'s Best Astronomy Websites. In an effort to recognize outstanding astronomy-related resources on the WWW, and to bring them to the attention of our website visitors, we, the webmasters of the Naperville Astronomical Association, have developed our Select Astronomy Site Award list. 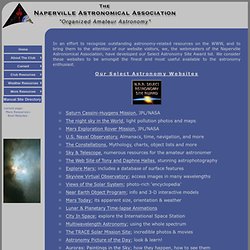 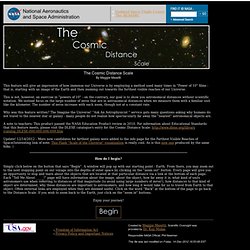 This is not, however, an exercise in "powers of 10" - on the contrary, our goal is to show you astronomical distances without scientific notation. We instead focus on the large number of zeros that are in astronomical distances when we measure them with a familiar unit like the kilometer. The number of zeros increase with each zoom, though not at a constant rate. Why was this feature written? A note to teachers: This product passed the NASA Education Product review in 2010. Update! How do I begin? Simply click below on the button that says "Begin". Astronomy Resources Subject Tracer Information Blog. 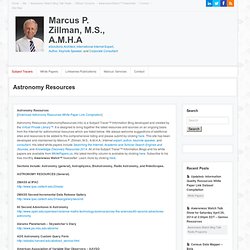 It is designed to bring together the latest resources and sources on an ongoing basis from the Internet for astronomical resources which are listed below. We always welcome suggestions of additional sites and resources to be added to this comprehensive listing and please submit by clicking here. This site has been developed and maintained by Marcus P. Zillman, M.S., A.M.H.A.; Internet expert, author, keynote speaker, and consultant. His latest white papers include Searching the Internet, Academic and Scholar Search Engines and Sources, and Knowledge Discovery Resources 2014. Sections Include: Astronomy (general), Astrophysics, BioAstronomy, Radio Astronomy, and RoboScopes. ASTRONOMY RESOURCES (General) Solar System, Solar System Information. Astronomy Picture of the Day's Educational Links.

What follows is a list of resources that excel in astronomy education. 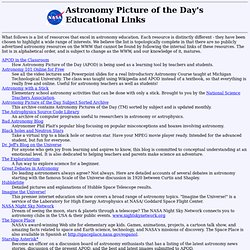 Each resource is distinctly different - they have been chosen to highlight a wide range of interests. We believe the list is topologically complete in that there are no publicly advertised astronomy resources on the WWW that cannot be found by following the internal links of these resources. The list is in alphabetical order, and is subject to change as the WWW, and our knowledge of it, matures. APOD in the Classroom. UK Astronomy Directory - links and news for UK astronomers and amateur astronomers. The Development of Modern Astronomy. Astronomy 162: Stars, Galaxies, and Cosmology. Astronomy. I missed the Occultation of Lambda Aquarii by Venus, but Tom Harradine didn't Partial Solar Eclipse, April 29 2014 Intel community willing to allow higher resolution commercial imagery For the last few years, commercial satellite remote sensing company DigitalGlobe (and, before its merger with DigitalGlobe, GeoEye) has been lobbying the government to allow it to sell sharper satellite imagery that it’s currently allowed. 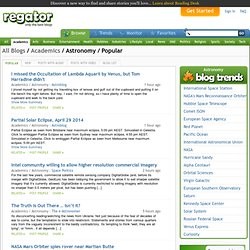 DigitalGlobe is currently restricted to selling imagery with resolution no sharper than 0.5 meters per pixel, but has been pushing [...] The Truth is Out There … isn’t it? Its disconcerting reading/watching the news from Ukraine. NASA Mars Orbiter spies rover near Martian Butte Scientists using NASA's Curiosity Mars rover are eyeing a rock layer surrounding the base of a small butte, called "Mount Remarkable," as a target for investigating with tools on the rover's robotic arm. read more. Home - Astronomiser. Glossary of Astronomical Terms. Astronomy articles, forums, listings, and other resources about Astronomy. Zoom Astronomy Glossary: A. Go Astronomy: Guide to Telescopes, Planets, Constellations & More. CliffsNotes. Universe Today — Space and astronomy news. Comet PANSTARRS En Route To Andromeda Galaxy Encounter. Want to stay on top of all the space news? 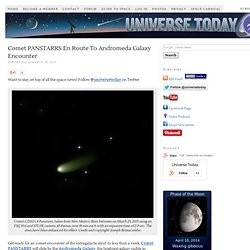 Follow @universetoday on Twitter Comet C/2011 L4 Panstarrs, taken from New Mexico Skies between on March 25, 2013 using an FSQ 10.6 and STL11K camera. 65 frames over 18 min each with an exposure time of 2.0 sec. The stars have been enhanced for effect. Credit and copyright: Joseph Brimacombe. Get ready for an comet encounter of the extragalactic kind. The Andromeda Galaxy is the closest large galaxy to our Milky Way. Their apparent proximity if of course pure sleight of hand; the comet will be a mere 121 million miles (195 million km) from Earth on that date compared to Andromeda’s 2.5 billion light years.