Royal Institute for Deaf and Blind Children. Coordinates: The Royal Institute for Deaf and Blind Children (RIDBC) in Sydney provides a range of educational services for students with vision and/or hearing impairment, including specialist schools for signing deaf students, oral deaf students, and students with sensory and intellectual disabilities.[1] RIDBC offers additional services such as therapy and braille text production, a children's audiology centre, and also conducts research and professional development through its RIDBC Renwick Centre. 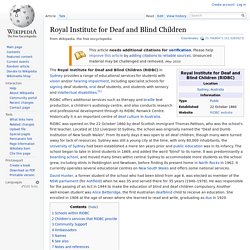 Historically it is an important centre of deaf culture in Australia. RIDBC was opened on the 22 October 1860 by deaf Scottish immigrant Thomas Pattison, who was the school's first teacher. Checklist to identify near-death patients to be trialled in Sydney hospitals. A checklist for identifying patients whose death is imminent will be trialled in seven major Sydney hospitals this year, with the aim of moving them into palliative care and sparing them from futile treatments. 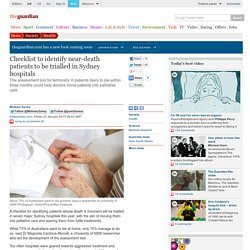 While 75% of Australians want to die at home, only 15% manage to do so, said Dr Magnolia Cardona-Morrell, a University of NSW researcher who led the development of the assessment tool. Too often hospitals were geared towards aggressive treatment and emergency resuscitation rather than a transition to end-of-life care, she said. “That’s why we gathered all the information we could about identifying patients in the last few months of their life, and came up with a checklist of 29 factors for doctors to consider to help tell them which patients are likely to die within three months,” Cardona-Morrell said.

A paper describing the assessment tool was published on Friday in the journal BMJ Supportive & Palliative Care. Betty Ford Center. The Betty Ford Center (BFC), is a non-profit, separately licensed residential chemical dependency recovery hospital in Rancho Mirage, California, that offers inpatient, outpatient, and residential day treatment for alcohol and other drug addictions, as well as prevention and education programs for family and children. 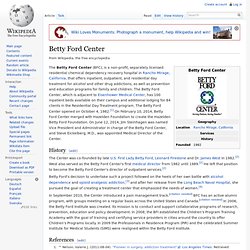 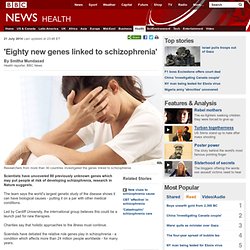 The team says the world's largest genetic study of the disease shows it can have biological causes - putting it on a par with other medical conditions. Led by Cardiff University, the international group believes this could be a launch pad for new therapies. Charities say that holistic approaches to the illness must continue. Tragedy of beautiful Alana Goldsmith who threw herself under a train.

Alana Goldsmith was 23 when she left hospital and took her life in 2011She had battled with anorexia nervosa for about eight yearsHer family requested an inquest into her deathThe aim was to review patient care and look at issues faced by eating order sufferers, carers and practitioners By Aap and Ryan Lipman Published: 08:10 GMT, 15 July 2014 | Updated: 10:35 GMT, 15 July 2014 Loved life: Alana Goldsmith was fun-loving, intelligent and successful, but she took her life at a train station in 2011 after fighting a long battle with anorexia nervosa She was a bubbly beautiful young girl who fell prey to an eating disorder and the family of a young woman who killed herself after a long battle with anorexia says the illness 'starved her brain and destroyed her hopes'. 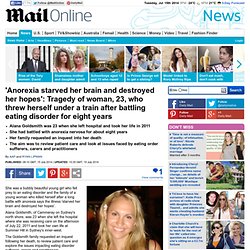 Alana Goldsmith, of Cammeray on Sydney's north shore, was 23 when she left the hospital where she was receiving care on the afternoon of July 22, 2011 and took her own life at Summer Hill in Sydney's inner-west. Coroner's ruling seen as a 'seismic shift' in how eating disorders are addressed. A coroner’s ruling that a young woman killed herself while suffering from anorexia nervosa should be the jolt that leads to a “seismic shift” in the way eating disorders are addressed by policy makers, the chief executive of Australia’s peak eating disorder support group says. 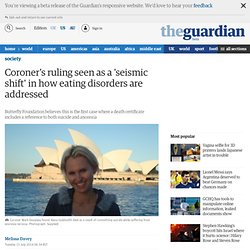 Staff failed to notice 23-year-old Alana Goldsmith when she walked out of the private hospital where she was receiving treatment for the eating disorder she had suffered since she was 15. She was found dead a few hours later. The coroner handed down his findings at the inquest into her death, in July 2012, at the New South Wales coroner’s court in Sydney on Tuesday. Health Care System of Elderly in Germany. The elderly population is one of the most vulnerable populations in the world of health care, mainly because of their susceptibility to contracting disease, limited access to health care insurance, limited or non-existent access to long-term care insurance, and/or reduced quality of life. 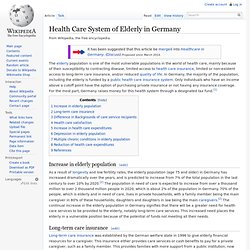 In Germany, the majority of the population, including the elderly is funded by a public health care insurance system. Only individuals who have an income above a cutoff point have the option of purchasing private insurance or not having any insurance coverage. For the most part, Germany raises money for this health system through a designated tax fund.[1] Increase in elderly population[edit] Long-term care insurance[edit] Supplemental Nutrition Assistance Program. SNAP logo The Supplemental Nutrition Assistance Program (SNAP),[1] formerly known as the Food Stamp program, provides food-purchasing assistance for low- and no-income people living in the U.S. 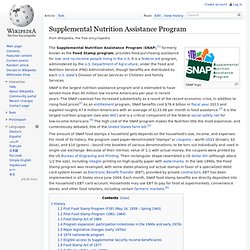 It is a federal aid program, administered by the U.S. Department of Agriculture, under the Food and Nutrition Service (FNS) Administration, though benefits are distributed by each U.S. state's Division of Social Services or Children and Family Services. SNAP is the largest nutrition assistance program and is estimated to have served more than 40 million low income Americans per year in recent years. History[edit] First Food Stamp Program (FSP) (May 16, 1939 – Spring 1943)[edit] The idea for the first FSP has been credited to various people, most notably U.S. Department of Health (Australia) National Health Service. National Health Service (England) This article is about the health service in England. 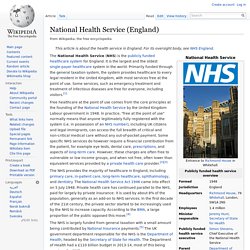 For its oversight body, see NHS England. Healthcare in Germany. Germany has a universal[1] multi-payer health care system with two main types of health insurance: "Law-enforced health insurance" (Gesetzliche Krankenversicherung) known as sickness funds and "Private" (Private Krankenversicherung).[2][3][4] Compulsory insurance applies to those below a set income level and is provided through private non-profit "sickness funds" at common rates for all members, and is paid for with joint employer-employee contributions. 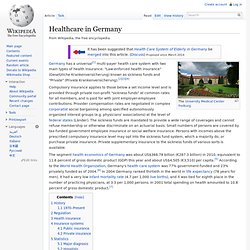 Provider compensation rates are negotiated in complex corporatist social bargaining among specified autonomously organized interest groups (e.g. physicians' associations) at the level of federal states (Länder). The sickness funds are mandated to provide a wide range of coverages and cannot refuse membership or otherwise discriminate on an actuarial basis.

Women and Newborn Health Service - Western Australia - Women and Newborn Health Service. Centers for Disease Control and Prevention. The Centers for Disease Control and Prevention (CDC) is the national public health institute of the United States. The CDC is a federal agency under the Department of Health and Human Services and is headquartered in Atlanta, unincorporated DeKalb County, Georgia, in Greater Atlanta.[1][2][3] Its main goal is to protect public health and safety through the control and prevention of disease, injury, and disability.

The CDC focuses national attention on developing and applying disease control and prevention. It especially focuses its attention on infectious disease, food borne pathogens, environmental health, occupational safety and health, health promotion, injury prevention and educational activities designed to improve the health of United States citizens. In addition, the CDC researches and provides information on non-infectious diseases such as obesity and diabetes and is a founding member of the International Association of National Public Health Institutes.