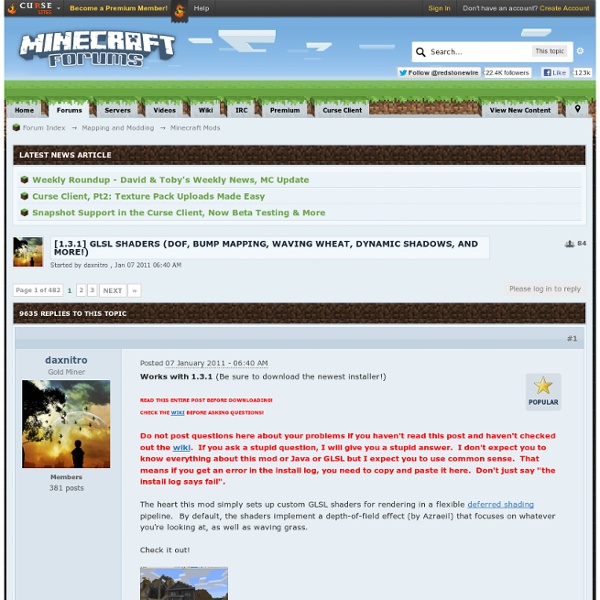 Works with 1.3.1 (Be sure to download the newest installer!) Do not post questions here about your problems if you haven't read this post and haven't checked out the wiki. If you ask a stupid question, I will give you a stupid answer. I don't expect you to know everything about this mod or Java or GLSL but I expect you to use common sense. The heart this mod simply sets up custom GLSL shaders for rendering in a flexible deferred shading pipeline. Check it out! Even if depth-of-field isn't for you, there are endless possibilities with GLSL shaders. Waving wheat, world curvature, and toon shader (video by Yourself): Parallax occlusion and specular mapping: These videos were made with a previous version of this mod. The new version of the mod does not yet include anti-aliasing options. The mod works nicely with most other mods (including Optifine). The download contains a graphical installer. Back up minecraft.jar before installing this mod. Dynamic Shadows Known Issues: Disclaimer Quote Contact:

Pixelated - A Minecraft Story Hello, my name is Aaron, and I write Minecraft Stories. This is my first story I am posting on the Forums, with more to come. Alright, here goes: Chapter 1: A Strange New Land I awoke in a strange land. “Hello.” Then, I revisited what Alexis had said, “Wait, you can punch trees?” I stopped when I had about… well, a lot of planks, and they were magically stored in this watch thing. We were inside our shelter, no light, no windows. Chapter 2: The Next Morning The next morning, I awoke to a zombie, dead, in the middle of our house. I replied, “Ok…” and I helped her toss it outside our house. Also, Alexis was panting. “Whatcha doing?” She placed it outside, and we went inside. Chapter 3: The Expansion The next morning, the pig was dead, in the bag. We went outside, and began walking to a pond outside our home. I hit Recipes, and found a recipe for a shovel and a pick. She awoke when I was moving my bed. She was astounded. Chapter 4: I Hate Furnaces “Hello? “FIRE!” “Great…” she said.

The Book of the Nether [Chapter 11 completed!] Chapter 10: A Fiery Night There was silence as the six friends stood at the gate, the light from its frame extinguished. Complete silence, because all of them knew that nothing could be done about it. "Well, guys," Chris spoke up, turning around to face the crimson landscape, "That sucks." "Pardon my French, Chris," Vladimir interjected forcibly, turning on his friend, "but no ­! "I am trying to have us keep calm, Vlad," Chris spoke slowly, annunciating clearly. "Focus on what?" Chris sighed and looked at his friend. Vladimir shook his head, and again looked at the frame of the gate, standing innocently in the center of the cave. Steel got up from the wall he was leaning on, and took some dirt from his bag. Flint bounded up to his brother, tapping him on his head. "Well," Chris said, snickering, "I guess the Nether Exploratory Crew is a go!" Vladimir groaned, walking past Chris and giving him a pained expression. "Hey, guys! "Er, why is it glowing?" "What's up, Flint?" "But, daddy!"

7.3] Hippoplatimus's Mods - Paint Mod (now with ModLoader!) You may be interested in my Mod Manager to easily manage your mods. Thanks to Samkio & Torrent for this video. Here's a giant painting, created by samalot. The paint mod allows you to craft paintbrushes which you can then use to paint on most blocks. You can color the paintbrush by putting it in a crafting table with any dye. You can also make a paint chipper, which acts like an eraser. You can wash paint off using water (or lava). Detail brushes can be crafted by using a feather instead of a wool block. If you want to rinse a brush off, so that it can be dyed a different color, throw the brush in a body of water. Downloads If you need help installing, you can check out this video, made by Wolv21.Download (adf.ly)Download for Server (adf.ly)Download (regular)-Download for Server (regular) Installation For the first download, simply install the contents of "Put in JAR" into minecraft.jar (remember to delete META-INF). For the server download, install the files into minecraft_server.jar.

Board Message Once apon a time, minecraft was a happy place, with limited maps and rana and humans runing freely around. But one day, it all went bad... The rana decided to take over this paradise with the help of there leader DOCK. Of course our great lord NOTCH had DOCK banished along with the ranas, and they were never seen for years. When alpha was implemented, DOCK secretly convinced NOTCH to make chickens. DOCK, in his mortal form, was the herobrine. So, yes the chickens are not the masterminds behind this cult. To overcome their master, DOCK, and have the world for themselves.

New Mod: In the Colonial Era...(NPC Poll 4DR) No, It Isn't Done Yet. Stop Asking for a Link. There is None. Do not post asking when it will be out. 'D if you do so. WHAT is it? Unison! Unite the people! Trade Perhaps you decide to pursue the trail of wealth! Mining Or maybe you decide that the time has come to show the world what your workforce is capable of! Hostile Mobs Revenge has come! Destruction The time has come to war! Culture Bring honor to your village and let its name be known throughout the extensive world of Minecraft! Go On... How do I get a Colony of my own? First, you have to settle somewhere and build your own house. NPCs that wander around are the Villager NPCs: Villager Description : Those rare little people you see as you walk in the forest, the ones with no official place to call home, they may be recruited by the bandit camps, other villages or your own. They are the initial colonists with no real profession, a hole ready to be filled in with whatever you desire. -Needs to know how to move in all directions Anything! 1.

7.3] The Wolfestone Mod! [V1.1] - NETHER UPDATE! CORRUPT WOLFESTONE ORE, TOOLS, ARMOR, WEAPONS, WOLFE TNT, AND NEW BOWS AND ARROWS!! The Wolfestone Mod! This is a mod dedicated to Jonathanwolfe038 who is an awesome youtuber who makes really funny and exciting minecraft and other let's play videos. Make sure to check out and subscribe to his youtube channel: Jonathanwolfe038 Or check him out on the minecraftforums: Jonathanwolfe038. Check out my YouTube channel: gelikman! Follow me on twitter to get the most recent updates about the Wolfestone Mod, and other future planned things: jbond98. Download The Wolfestone Mod Update 1.3.2 that you all have been waiting for is almost at release. Wolfelandia Update! Features: This mod adds a new ore with many craftables, new plants, armor, tools, and much much more! Brief Block and Item Specs: Wolfestone Ore- Only mineable with a Diamond Pickaxe, Generates at level 16 and below, it gives off a lite glow to make it easier to spot in dark caves, about as (maybe a little bit more) rare as Diamond Ore. Wolfestone Ore This is Wolfestone Ore! Well... Wolfestone Aha! Wolfestone Block Wolfe TNT

Minecraft Wiki - The ultimate resource for all things Minecraft So you want to make an MMORPG? - a knol by Josh Aurich Some people, such as myself, have spent a good deal of time trying to find more information about MMORPGs, how they work, and most importantly, how to make one. I have found the answers to my questions and I thought I would share them with the world. Below is a basic table of contents of what I will be going over in this Knol. I. II. III. This is a commonly answered question, but sometimes people just don't know. Basically the MMORPG is hosted on a central server(s) and the player downloads and installs a client which is then used to connect to the server. This is the question I had been wanting to have the answer for since I was a small child watching my cousins roam around in the seeming endlessness of their online MMORPGs that they played. When it comes down to it, there are 2 main types of MMORPGs that you can make: 2D or 3D. 2D MMORPG Engines: 3D MMORPG Engines: My personal favorite. A more advanced game engine which requires a good amount of knowledge of programming.

Welcome to Mod The Sims Garden of Shadows - Index 50 Days of Punishment - A Minecraft story Part 1: The Sentence It wasn't fair. At least, it didn't seem fair to him. "Get out of your daydreams!" The man rolled his eyes at the Guardian but got up from his bed and followed him without trouble. The one sitting in the center fixed his glasses and peered at the person before him. Nathan sighed. The man nodded. Nathan balked. The next thing he saw was a vast ocean, stretching endlessly. "Well," he grunted to no one. Part 2: The First Day Nathan decided there was nothing to be had on the beach, so he plunged into the forest. He spend quite a long time weaving through the trees. He soon found a nearly vertical rock wall that shot up above the trees. What he saw almost made him cry. A snort behind him alerted him to the presence of another living creature. The pig's utter disregard to him angered Nathan greatly. Nathan didn't have time to scream in fright, because he hit a bit of steep ground a few feet underneath the edge and ended up rolling down to the western part of the forest.

Memoirs of the Endermen (Chapter 8 out!) Chapter 1 The first time I ever awoke, I was laying face down on a beach. The first thing I noticed was the smell, it was a strong, salty smell, and as I sat up and took a look around, it wasn't hard to realize the smell was coming from the sea. I steadily got back up, hoping the dizziness wouldn't come back. I began wandering towards it, unable to actually walk in a straight line. I needed to build a shelter, somewhere to stay when the sun descends beyond the horizon. Night began to fall, and as the world got darker, so did my shelter. JavaScript Tutorial