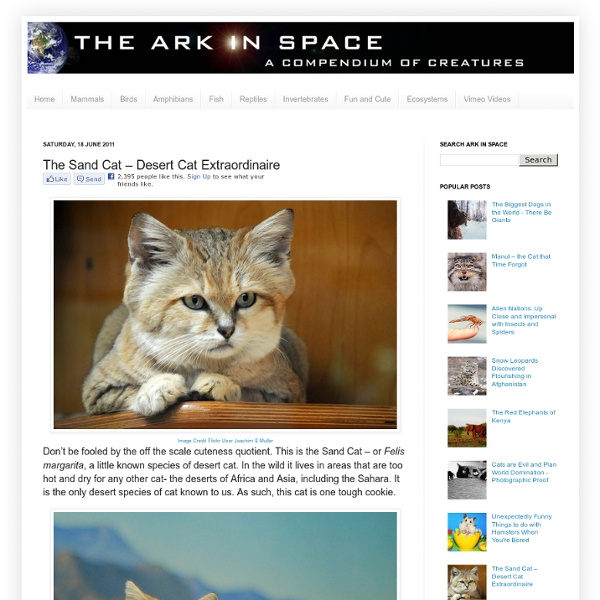 Don’t be fooled by the off the scale cuteness quotient. This is the Sand Cat – or Felis margarita, a little known species of desert cat. In the wild it lives in areas that are too hot and dry for any other cat- the deserts of Africa and Asia, including the Sahara. It is the only desert species of cat known to us. As such, this cat is one tough cookie. It also lives in the Arabian desert and those of Iran and Pakistan, yet despite being so widespread it was not described by a European until 1858. He named it Felis margarita after Jean August Margueritte. To an extent the sand cat could be mistaken for a domestic cat but there are differences, noticeably the very broad head. Likewise with their height – they usually grow to about six centimeters taller than the domestic cat. One difference from the cats that we know which is difficult to see in these pictures is the fur that the cats have between their toes. As they mostly eat rodents, they do a lot of digging.

Cats are going extinct: 12 most endangered feline species Today, May 17th, is Endangered Species Day. We are celebrating it by bringing attention to the diverse and beautiful felid species around the world that are in danger of becoming extinct. The following species are either currently listed as endangered or vulnerable. We hope that by learning about these amazing relatives of our well-loved domestic cats, readers will be encouraged to act to protect these species. First up is the well-known snow leopard. This iconic cat lives in the unbelievably cold habitats of alpine and subalpine areas Central Asia and is rarely ever seen in the wild based in part because of its elusive nature and in part because there are so few left in the world. But there are many lesser-known feline species, some that you may never have even heard of before.

Manul – the Cat that Time Forgot Have you ever wanted to take a trip through time to see what animals looked like millions of years ago? When it comes to cats there is little or no need. This beautiful specimen is a Manul, otherwise known as Pallas’s Cat. About twelve million years ago it was one of the first two modern cats to evolve and it hasn’t changed since. The other species, Martelli’s Cat, is extinct so what you are looking at here is a unique window in to the past of modern cats. Although the Manul is only the size of the domestic cat, reaching about 26 inches in length its appearance makes it appear somewhat larger. The main reason for its survival throughout the ages has been its isolation. Take a close look at the eyes of the Manul. It also has a much shorter face than other cats, which makes its face look flattened. The Manus has not been studied a great deal in the wild, where it is classified as near threatened. Don’t rush to your local pet store, however.