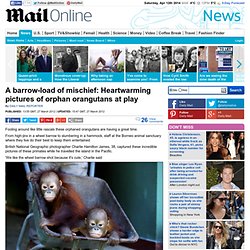 Gorillas in the Democratic Republic of Congo. As I mentioned in my last post on gorilla trekking, the experience boils down to a matter of luck. You never know in advance how far you will have to hike to encounter these rare great apes, who forage up and down the vertiginous, forested slopes of dormant volcanoes searching for their favorite fruits, roots, and leaves according to season. On my just-finished trip to the Virunga National Park, in the eastern Democratic Republic of Congo, we slogged two and a half hours before making contact. Starting at 9 a.m. from the Bukima Ranger station, we walked across two miles of muddy cow pasture and potato fields to reach the walled park boundary, and then headed uphill on a path covered with slippery tree roots and jagged, exposed lava, in radio contact with trackers who had set out at dawn. 97 per cent human: photographs of primates by Anup Shah and Fiona Rogers. Gorilla Reunion — 2 Brothers See Each Other After Years Apart [7 Pictures]

August 17, 2012 at 2:00pm | by AP Kesho and his younger brother Alf were separated when Kesho was moved to Dublin more than two years ago. 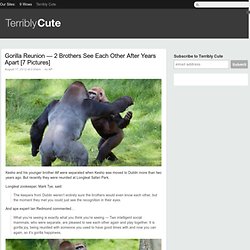 But recently they were reunited at Longleat Safari Park. Longleat zookeeper, Mark Tye, said: The keepers from Dublin weren’t entirely sure the brothers would even know each other, but the moment they met you could just see the recognition in their eyes. And ape expert Ian Redmond commented… Bonobos playing airplane. Bonobos are not ordinary animals, mammals, primates, or monkeys! 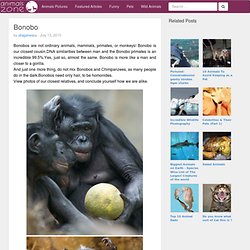 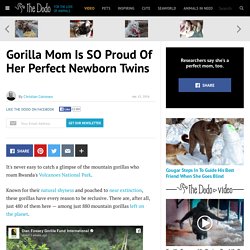 Known for their natural shyness and poached to near extinction, these gorillas have every reason to be reclusive. Peanut Trick. Self-Recognition in Apes. Planning of the Apes: Zoo Chimp Plots Rock Attacks. Think people are the only ones who can plan for the future? 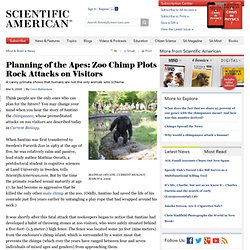 You may change your mind when you hear the story of Santino the chimpanzee, whose premeditated attacks on zoo visitors are described today in Current Biology. When Santino was first transferred to Sweden's Furuvik Zoo in 1983 at the age of five, he was relatively calm and passive, lead study author Mathias Osvath, a postdoctoral student in cognitive sciences at Lund University in Sweden, tells ScientificAmerican.com. This Bonobo Starts Fires And Cooks His Own Food. This bonobo named “Kanzi” can start a fire and cook food on his own. 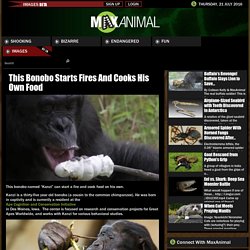 Kanzi is a thirty-five year old bonobo (a cousin to the common chimpanzee). He was born in captivity and is currently a resident at the Ape Cognition and Conservation Initiative in Des Moines, Iowa. The center is focused on research and conservation projects for Great Apes Worldwide, and works with Kanzi for various behavioral studies. Image: Jeroen Kransen Kanzi has learned to gather twigs and branches, arrange them into a pile, light a match, and build his own fire. A Plastic Ocean Official Trailer. Less Meat More Life - Join the movement for less meat and dairy - Greenpeace ... Team Plant. Permavenir - Une parodie animée du film Star wars de... STOP PLASTIC. China's pollution. Fiche tache intermediaire poster chapter lets save the planet. Fiche chapter let's save the planet. A Greener World. [ Quiz Script ] First, name three environmental problems that face our world today, how people can help solve these problems. 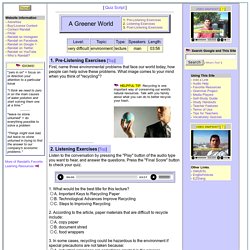 What image comes to your mind when you think of "recycling"? Listen to the conversation by pressing the "Play" button of the audio type you want to hear, and answer the questions. Press the "Final Score" button to check your quiz. Listen to the conversation again as you read the Quiz Script. What are five specific things individuals can do to protect the environment? Now, write your opinions on a similar topic at Randall's ESL Blog HERE. Saving the Earth - Recycling. [ Randall created this listening activity on saving the environment in 1999, featuring his daughter, Aubrey. 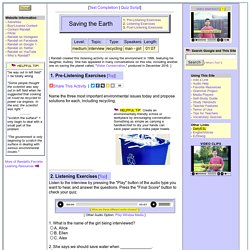 She has appeared in many conversations on this site, including another one on saving the planet called, "Water Conservation," produced in December 2016. ] Name the three most important environmental issues today and propose solutions for each, including recycling. Listen to the interview by pressing the "Play" button of the audio type you want to hear, and answer the questions. Press the "Final Score" button to check your quiz. [ Other Audio Option: Play Window Media ] Listen to the conversation again as you read the Quiz Script. Conduct research on how paper and glass are recycled and then report on the types of products that are produced from these recycled materials. Now, write your ideas on a similar topic at Randall's ESL Blog HERE. Now, write your opinions on a similar topic at Randall's ESL Blog HERE.