A great step-by-step video on how to raise pigs... - Ranching For Profit. Rethink Food Waste. FWRA BSR Tier3 FINAL. Pigs fed whiskey mash: What does Templeton distillery have in mind? AllAboutFeed - Regulate the use of food waste as feed. IWMP2018. Leftovers for Livestock A Legal Guide August 2016. Pig Idea UK policy report. In South Korea, An Innovative Push to Cut Back on Food Waste. Food waste is a global problem, with the United Nations estimating that a third of the food produced worldwide winds up spoiled, rotting in fields, or being thrown away. 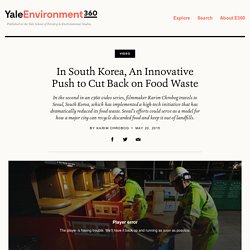 That amounts to 1.3 billion tons of food wasted annually, a profligacy that carries major environmental, economic, and human costs. In the second of a two-part series, “Wasted,” we present an e360 video that looks at how South Korea is taking extraordinary steps to deal with its food waste. The video, by filmmaker Karim Chrobog, focuses on Seoul, the sprawling South Korean capital of more than 10 million people, which has ramped up efforts to slash the amount of food being thrown away. As the video shows, Seoul has introduced innovative, high-tech programs that require residents to deposit their food waste in bins, where the amount of food they toss out is weighed by household using a key-card system. 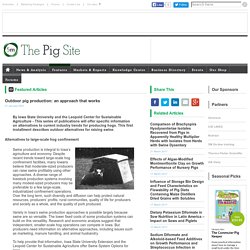 This first installment describes outdoor alternatives for raising swine. Alternatives to large-scale hog confinement Swine production is integral to Iowa’s agriculture and economy. Variety in Iowa’s swine production approaches is possible largely because swine are so versatile. Profitable Pork. Alternative Strategies for Hog Producers Farmers who want to successfully produce pork on a small scale can preserve their independence in the face of the consolidating hog industry. 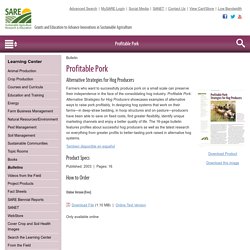 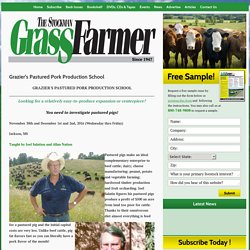 You need to investigate pastured pigs! November 30th and December 1st and 2nd, 2016 (Wednesday thru Friday) Jackson, MS Taught by Joel Salation and Allan Nation Pastured pigs make an ideal complementary enterprise to beef cattle; dairy; cheese manufacturing; peanut, potato and vegetable farming; hardwood timber production and fruit orcharding. At this school here are just a few things you will learn: How to retrofit a pasture for pig grazing with electric fencing. This Grazier’s Pastured Pork Production School is limited to only 26 people. Refund Policy: There will be no refunds issued with less than 14 days notice before the event. Pork Information Gateway - Pork Information Gateway.

Best Darn Pig Farrowing Video Ever « On Pasture. Who goes to a pig farrowing in their shorts and loafers? 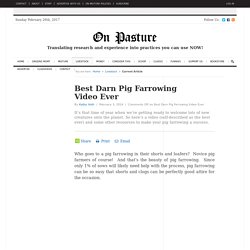 Novice pig farmers of course! And that’s the beauty of pig farrowing. Since only 1% of sows will likely need help with the process, pig farrowing can be so easy that shorts and clogs can be perfectly good attire for the occasion. What this video doesn’t show you is the prep up to the time the piglets were born that helps them get a good start in life and how you know the piglets are on their way.

Set Up Your Farrowing Area. BeddedPackWebVersionFinal. Bedded Pack Buildings: Solving the Winter Mud, Muck and Manure Problem « On Pasture. It’s a problem we face every year: how are we going to care for our livestock through the winter months, and what are we going to do with the load of mud, muck and manure that’s bound to accumulate? 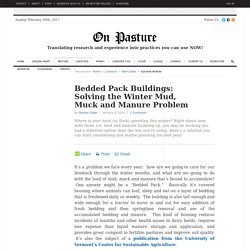 One answer might be a “Bedded Pack.” Basically it’s covered housing where animals can loaf, sleep and eat on a layer of bedding that is freshened daily or weekly. The building is also tall enough and wide enough for a tractor to move in and out for easy addition of fresh bedding and then springtime removal and use of the accumulated bedding and manure. This kind of housing reduces incidents of mastitis and other health issues in dairy herds, requires less expense than liquid manure storage and application, and provides great compost to fertilize pastures and improve soil quality.

It’s also the subject of a publication from the University of Vermont’s Center for Sustainable Agriculture. Bedded Pack Building Specifications What Makes the Best Bedding? What’s the Cost of a Bedded Pack? How to Raise Pastured Pigs Without Buying Feed. For thousands of years, pigs have been the quintessential biological recyclers, foragers, and grazers. 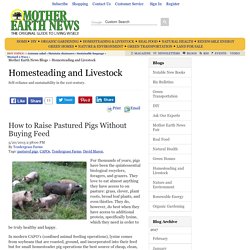 They love to eat almost anything they have access to on pasture: grass, clover, plant roots, broad leaf plants, and even thistles. They do, however, do best when they have access to additional protein, specifically lysine, which they need in order to be truly healthy and happy. In modern CAFO’s (confined animal feeding operations), lysine comes from soybeans that are roasted, ground, and incorporated into their feed but for small homesteader pig operations the best source of cheap, clean, lysine is often outdated milk products. Sugar Mountain Farm. We are a small, family owned and operated farm in the mountains of Vermont. 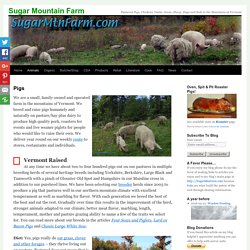 We breed and raise pigs humanely and naturally on pasture/hay plus dairy to produce high quality pork, roasters for events and live weaner piglets for people who would like to raise their own. We deliver year round on our weekly route to stores, restaurants and individuals. Vermont Raised At any time we have about two to four hundred pigs out on our pastures in multiple breeding herds of several heritage breeds including Yorkshire, Berkshire, Large Black and Tamworth with a pinch of Glouster Old Spot and Hampshire in our Mainline cross in addition to our purebred lines.