(1930's) Wilf Batty with the last wild Thylacine. The very last photo of the extinct Japanese River Otter (1979) Elephant bird. Description[edit] Size of Aepyornis maximus (centre, in purple) compared to a human, an ostrich (second from right, in maroon), and some non-avian theropoddinosaurs. 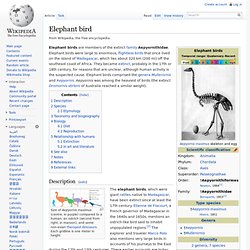 Each gridline is one meter in height The elephant birds, which were giant ratites native to Madagascar, have been extinct since at least the 17th century. Étienne de Flacourt, a French governor of Madagascar in the 1640s and 1650s, mentions an ostrich-like bird said to inhabit unpopulated regions.[2] The explorer and traveler Marco Polo also mentions very large birds in accounts of his journeys to the East during the 12th and 13th centuries.

These earlier accounts are today believed to describe elephant birds.[3] Aepyornis, believed to have been more than 3 m (10 ft) tall and weighing close to 400 kg (880 lb),[4] was at the time the world's largest bird. Species[edit] Genus Aepyornis Genus Mullerornis Etymology[edit] Mullerornis agilis. (March 19, 2018) Wildlife ranger Zacharia Mutai comforts Sudan, the last Northern White Rhino left on the planet, moments before he passed away. Giant Chinese paddlefish declared extinct in China. Beijing — Scientists say a giant fish species that managed to survive at least 150 million years has been completely wiped out by human activity. 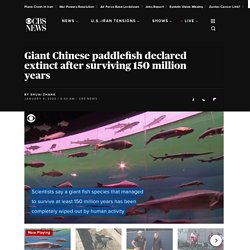 Song of the last Kauai O'o (recorded 1987) (1925) Last known photo of a Barbary lion in the wild (Atlas Mountains, N. Africa) 11 Extinct Animals That Have Been Photographed Alive. Animals Published on April 2nd, 2009 | by Bryan Nelson. 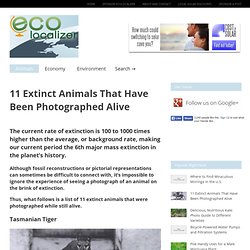 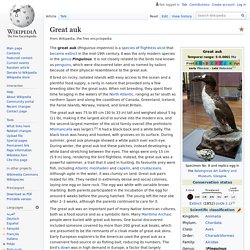 It was the only modern species in the genus Pinguinus. It is not closely related to the birds now known as penguins, which were discovered later and so named by sailors because of their physical resemblance to the great auk. It bred on rocky, isolated islands with easy access to the ocean and a plentiful food supply, a rarity in nature that provided only a few breeding sites for the great auks. Australian mammals on brink of extinction calamity.

10 February 2015Last updated at 07:58 ET By Helen Briggs Environment Correspondent The endangered northern quoll, a mammal species native to Australia Australia has lost one in ten of its native mammals species over the last 200 years in what conservationists describe as an "extinction calamity". 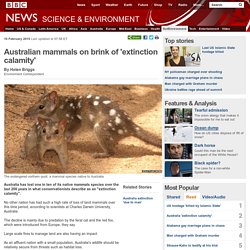 No other nation has had such a high rate of loss of land mammals over this time period, according to scientists at Charles Darwin University, Australia. Tasmanian tiger DNA 'lives' again. Seventy years after the ferocious Tasmanian tiger went extinct, its marsupial DNA has been resurrected inside mice. 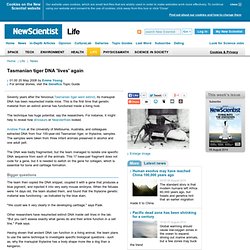 This is the first time that genetic material from an extinct animal has functioned inside a living host. The technique has huge potential, say the researchers. For instance, it might help to reveal how dinosaurs or Neanderthals looked. Andrew Pask at the University of Melbourne, Australia, and colleagues extracted DNA from four 100-year-old Tasmanian tiger, or thylacine, samples. The samples were taken from three infant animals preserved in alcohol and one adult pelt. List of recently extinct mammals. A large number of prehistoric mammals are extinct, such as Megafauna. 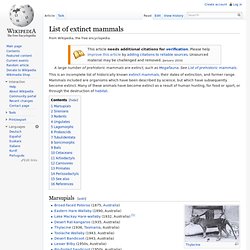 See List of prehistoric mammals. This is an incomplete list of historically known extinct mammals, their dates of extinction, and former range. Mammals included are organisms which have been described by science, but which have subsequently become extinct. The Rate of Extinction: 3 Species per Hour. About 6 waves of massive extinction are known in the history of the Earth. 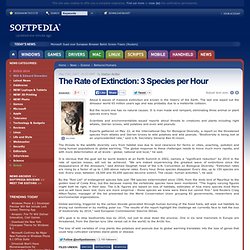 The last one wiped out the dinosaur world 65 million years ago and was probably due to a meteorite collision. But the recent one has no natural causes. It is man made and rampant, eliminating three animal or plant species every hour. Scientists and environmentalists issued reports about threats to creatures and plants including right whales, Iberian lynxes, wild potatoes and even wild peanuts. Experts gathered on May 22, at the International Day for Biological Diversity, a report on the threatened species from whales and Iberian lynxes to wild potatoes and wild peanuts.

The threats to the wildlife diversity vary from habitat loss due to land clearance for farms or cities, poaching, pollution and rising human populations to global warming. Determination at all levels - global, national and local," he said. UE's goal is to stop biodiversity loss by 2010, not just to slow down the process.

Extinct Birds - The Ivory Bill. Extinct Galapagos Giant Tortoises Could Be Brought Back To Life. When Lonesome George died in 2012, it was thought that so did the last Pinta Island giant tortoise. 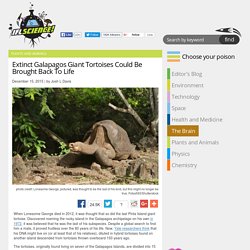 Discovered roaming the rocky island in the Galapagos archipelago on his own in 1972, it was believed that he was the last of his subspecies. Despite a global search to find him a mate, it proved fruitless over the 80 years of his life. Now, Yale researchers think that his DNA might live on (or at least that of his relatives), diluted in hybrid tortoises found on another island descended from tortoises thrown overboard 150 years ago.