The Only 12 Exercises You Need To Get In Shape 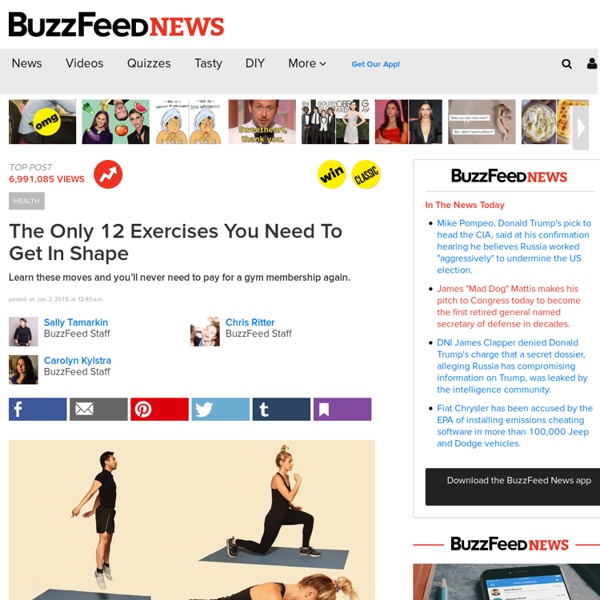 Productivity Advice I Learned From People Smarter Than Me Ryan Holiday is the bestselling author of The Obstacle Is The Way, the founder of Brass Check Marketing and gives monthly book recommendations to 30,000 people here. Like all people, I’d like to think I am a productive person. If I am, however, it’s because I’ve been ruthlessly efficient at one thing: stealing secrets and methods from people a lot smarter than me. In my career, I’ve had the fortune of coming in contact with bestselling authors, successful entrepreneurs, investors, executives and creative people. Some I didn’t meet, but I found their thoughts in book form.

The Recipe That Pissed Off Big Pharma The recipe we are about to present is consisted of two very powerful ingredients – cinnamon and honey. It can make wonders for your health even though it is not well known in the modern society. The combination can strengthens the heart, lower cholesterol, prevent heart attacks, and help in preventing wheezing. Many worldwide pharmaceutical companies do not like the fact that the ingredient with no expiration date, honey, combined with cinnamon can heal and treat many different kinds of diseases and health conditions. Executive Functions Impaired in ADD/ADHD From more than 25 years of clinical interviews and research with children, adolescents and adults who have ADD/ADHD, Dr. Brown has developed an expanded model to describe the complex cognitive functions impaired in ADD/ADHD. This model describes executive functions, the cognitive management system of the human brain.

A Map Of The Loneliest Places On Earth If you really feel like escaping from the world, and that quiet spot you used to run away to as a kid just won’t cut it, then you might want to use this map as a guide. This cartogram-- world maps in which territories are resized according to a particular variable-- was created by geographer Benjamin Hennig, the creator of the website Views Of The World which has tons more awesome data visualizations like this one. The idea behind this particular map was to visualize the loneliest places on Earth, but rather than showing us the most and least populated areas, the cartogram highlights the remotest areas. To do this, the travel time that is necessary to reach the nearest major city (defined as having over 50,000 inhabitants) from a given point was calculated, and then each grid cell was resized accordingly.

Questions That Matter Which works best for getting rid of depression: hope for the best from a pill, or talking to a shrink? The answer to this, according to recent research [1] won't surprise you (the answer is to do both), but the reason for it may surprise you. It has to do with a battle of sorts between two very different parts of the brain: the amygdala Arrow-shooting spell The arrow-shooting spell is a conjuration spell which fires arrows from the caster's wand. The spell was often used by Appleby Arrows supporters at Quidditch matches to show their support for their teams. However, the British and Irish Quidditch League Headquarters banned the use of the spell at matches when referee Nugent Potts was pierced through the nose with a stray arrow in 1894. Known practitioners

How Making 1 Percent Improvements for Everything Adds Up In 2010, Dave Brailsford faced a tough job. No British cyclist had ever won the Tour de France, but as the new General Manager and Performance Director for Team Sky (Great Britain’s professional cycling team), Brailsford was asked to change that. His approach was simple. Brailsford believed in a concept that he referred to as the “aggregation of marginal gains.” He explained it as “the 1 percent margin for improvement in everything you do.”

Shield Charm "You wouldn't believe how many people, even people who work at the Ministry, can't do a decent Shield Charm [...] " —George Weasley[src] Why Reading On Paper, Scientifically, Makes Us Happier People. In the late-90s, Palm Pilots were hailed as the ultimate productivity tool. It had it all — well, except a phone. Then, the smartphone arrived, of course, and drove Palm to extinction. It became all about the iPhone. Advertisement

Impervius Charm The Impervius Charm[4] (Impervius[4][1]) was a charm that caused an artefact to become waterproof[1] or allow someone better sight in bad weather conditions by preventing the rain from hitting their faces.[4] The charm could also be used to repel mist[3]. Known uses Know practitioners Feel Like an Impostor? You're Not Alone Sometimes I find myself waiting for the e-mail saying: “Sorry, we’ve made a huge mistake, you are fired.” Every success is a fluke. Each mistake is a disaster I play over and over again. I’ve convinced myself that one day it will all come crashing down.