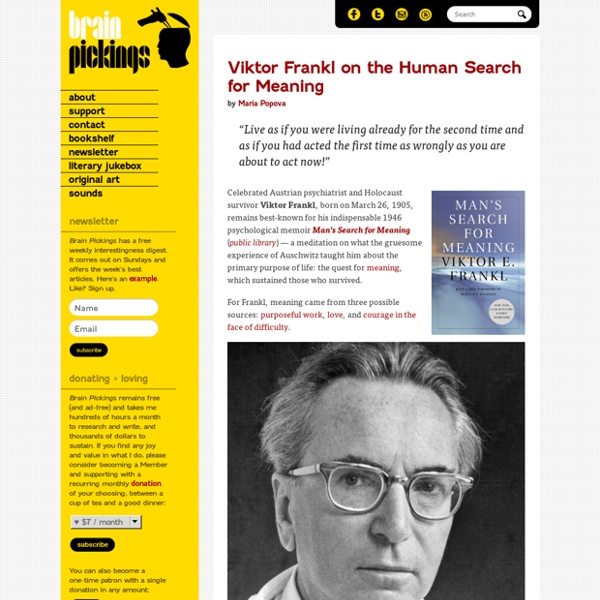 by Maria Popova “Live as if you were living already for the second time and as if you had acted the first time as wrongly as you are about to act now!” Celebrated Austrian psychiatrist and Holocaust survivor Viktor Frankl, born on March 26, 1905, remains best-known for his indispensable 1946 psychological memoir Man’s Search for Meaning (public library) — a meditation on what the gruesome experience of Auschwitz taught him about the primary purpose of life: the quest for meaning, which sustained those who survived. For Frankl, meaning came from three possible sources: purposeful work, love, and courage in the face of difficulty. In examining the “intensification of inner life” that helped prisoners stay alive, he considers the transcendental power of love: Love goes very far beyond the physical person of the beloved. Frankl illustrates this with a stirring example of how his feelings for his wife — who was eventually killed in the camps — gave him a sense of meaning: Donating = Loving

Henry Miller on the mystery of the universe and the meaning of life by Maria Popova “This is the greatest damn thing about the universe. That we can know so much, recognize so much, dissect, do everything, and we can’t grasp it.” More than merely one of the most memorable, prolific, and disciplined authors of the twentieth century, Henry Miller was also a champion of the wisdom of the heart, a poignant oracle of writing, a modern philosopher. Anchoring the biographical anecdotes are Miller’s many meditations on writing, creativity, and the meaning of life. What are we here for if not to enjoy life eternal, solve what problems we can, give light, peace and joy to our fellow-man, and leave this dear fucked-up planet a little healthier than when we were born. The book ends with Miller’s grandest reflection on the eternal mystery of the universe, something great minds from Galileo to Montaigne to Neil deGrasse Tyson have pondered. No matter what you touch and you wish to know about, you end up in a sea of mystery. Donating = Loving Share on Tumblr

A. H. Maslow (1943) A Theory of Human Motivation Classics in the History of Psychology An internet resource developed byChristopher D. GreenYork University, Toronto, OntarioISSN 1492-3713 (Return to Classics index) A Theory of Human Motivation A. Originally Published in Psychological Review, 50, 370-396. Posted August 2000 [p. 370] I. In a previous paper (13) various propositions were presented which would have to be included in any theory of human motivation that could lay claim to being definitive. 1. The present paper is an attempt to formulate a positive theory of motivation which will satisfy these theoretical demands and at the same time conform to the known facts, clinical and observational as well as experimental. It is far easier to perceive and to criticize the aspects in motivation theory than to remedy them. The 'physiological' needs. -- The needs that are usually taken as the starting point for motivation theory are the so-called physiological drives. Undoubtedly these physiological needs are the most pre-potent of all needs.

Sherwood Anderson on Art and Life: A Letter of Advice to His Teenage Son, 1927 by Maria Popova “The object of art is not to make salable pictures. It is to save yourself.” The quest to find one’s purpose and live the creative life boldly is neither simple nor easy, especially for a young person trying to make sense of the world and his place in it. In the spring of 1926, Sherwood Anderson sent his seventeen-year-old son John a beautiful addition to history’s most moving and timeless letters of fatherly advice. The best thing, I dare say, is first to learn something well so you can always make a living. The following year, after Anderson and his wife took eighteen-year-old John and his sister Marion to Europe, the boy remained in Paris to study painting. In relation to painting. Donating = Loving Bringing you (ad-free) Brain Pickings takes hundreds of hours each month. You can also become a one-time patron with a single donation in any amount: Brain Pickings has a free weekly newsletter. Share on Tumblr

Corbett -- What is Existentialism? Bob Corbett March 1985 Existentialism. A difficult term to define and an odd movement. Odd because most thinkers whom the intellectual world categorizes as existentialists are people who deny they are that. And, two of the people whom nearly everyone points to as important to the movement, Soren Kierkegaard and Fredrich Nietzsche, are both too early in time to be in the group, thus are usually called "precursorers," but studied and treated as members of the group. Major figures like Jean-Paul Sartre, Martin Heidegger and Albert Camus all flatly deny they are in the movement (at least at times they did), yet everyone says they are central. Secondly, the term is very difficult, if not totally impossible to define. However, I can define certain characterists that most Existentialists (and precursors to Existentialism) seem to share: Another way of doing it is much simpler. In response to a question about the above: If: I am a person serious about my acts. Then: Bob Corbett

Delhi to reuse 80 per cent sewage by 2027 With no new dams in sight, the draft Delhi Water Policy, 2013 calls for reuse of treated sewage to achieve water security in the capital Delhi’s 2051 water demand at the norm of 172 litres per person per day works out to 1,018 million gallons a day. Will the new state water policy help to bridge the demand-supply gap and achieve water security? The population of Delhi is expected to be 27 million by 2051, roughly 10 million more than what it is today. But how to ensure everyone gets sufficient water even in the present time is a matter that remains unresolved. Formulating a water policy with the prime objective of “ensuring the long-term water security of the national capital territory (NCT) of Delhi even under conditions of external flux”, is the first step in the direction taken by the Delhi Government. The draft document (pdf), acknowledges that the large dams planned in the upper reaches of the Yamuna basin are unlikely to be operationalised in “15 to 20 years”, if at all.

They're Made out of Meat by Terry Bisson "So ... what does the thinking?" "You're not understanding, are you? You're refusing to deal with what I'm telling you. The brain does the thinking. The meat." "Thinking meat! "Yes, thinking meat! "Omigod. "Thank you. "Omigod. "First it wants to talk to us. "We're supposed to talk to meat." "That's the idea. "They actually do talk, then. "Oh, yes. "I thought you just told me they used radio." "They do, but what do you think is on the radio? "Omigod. "Officially or unofficially?" "Both." "Officially, we are required to contact, welcome and log in any and all sentient races or multibeings in this quadrant of the Universe, without prejudice, fear or favor. "I was hoping you would say that." "It seems harsh, but there is a limit. "I agree one hundred percent. "Just one. "So we just pretend there's no one home in the Universe." "That's it." "Cruel. "They'll be considered crackpots if they do. "A dream to meat! "And we marked the entire sector unoccupied." "Good. "They always come around." the end

A dog sniffing at me Philosophy of Søren Kierkegaard Søren Kierkegaard's philosophy has been a major influence in the development of 20th-century philosophy, especially existentialism and postmodernism. Kierkegaard was a 19th-century Danish philosopher who has been called the "Father of Existentialism".[1] His philosophy also influenced the development of existential psychology.[2] Kierkegaard criticized aspects of the philosophical systems that were brought on by philosophers such as Georg Wilhelm Friedrich Hegel before him and the Danish Hegelians. He was also indirectly influenced by the philosophy of Immanuel Kant.[3] He measured himself against the model of philosophy which he found in Socrates, which aims to draw one's attention not to explanatory systems, but rather to the issue of how one exists.[4] One of Kierkegaard's recurrent themes is the importance of subjectivity, which has to do with the way people relate themselves to (objective) truths. Note on pseudonyms[edit] Themes in his philosophy[edit] Alienation[edit] Death[edit]