The Earthquake That Will Devastate Seattle 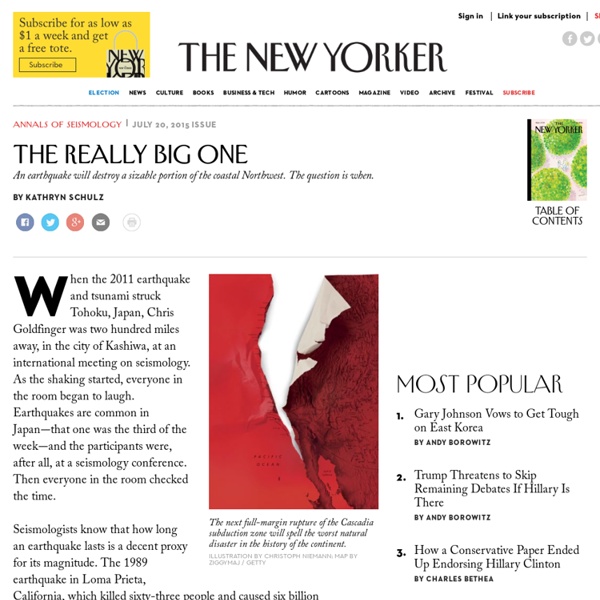 When the 2011 earthquake and tsunami struck Tohoku, Japan, Chris Goldfinger was two hundred miles away, in the city of Kashiwa, at an international meeting on seismology. As the shaking started, everyone in the room began to laugh. Earthquakes are common in Japan—that one was the third of the week—and the participants were, after all, at a seismology conference. Then everyone in the room checked the time. Seismologists know that how long an earthquake lasts is a decent proxy for its magnitude. The 1989 earthquake in Loma Prieta, California, which killed sixty-three people and caused six billion dollars’ worth of damage, lasted about fifteen seconds and had a magnitude of 6.9. When Goldfinger looked at his watch, it was quarter to three. It was March. Oh, shit, Goldfinger thought, although not in dread, at first: in amazement. For a moment, that was pretty cool: a real-time revolution in earthquake science. Just north of the San Andreas, however, lies another fault line. But it did not.

Public-Friendly Open Science Previous “A “Modern Scientist” Manifesto” In the 21st century science is growing more technical and complex, as we gaze further and further while standing on the shoulders of many generations of giants. The public has often a hard time understanding research and its relevance to society. e-Estonia - estonia.eu "e-Estonia" is the term commonly used to describe Estonia's emergence as one of the most advanced e-societies in the world – an incredible success story that grew out of the partnership between a forward-thinking government, a pro-active ICT sector, and a switched-on, tech-savvy population. Thanks to this success, Estonians and the Estonian state enjoy a wide range of e-solutions that those living elsewhere can only dream about. In Estonia you can access wi-fi internet even in forestsFor citizens of Estonia, e-services have become routine: e-elections, e-taxes, e-police, e-healthcare, e-banking, and e-school.

San Andreas fault ‘ready to go,’ expert warns of major earthquake A massive earthquake looms for Southern California, according to one expert. Thomas Jordan, director of the Southern California Earthquake Center, shared his ominous warning during this week's National Earthquake Conference in Long Beach. Kevin Schafer/Getty Images/Minden Pictures RM *****Tsunami resilience: School gym tsunami haven (wired) The Pacific Northwest is due for a catastrophic earthquake. When it happens, the region will almost certainly face a tsunami for which it is utterly unprepared. Westport, Washington, is among the few places taking steps to prepare for such a disaster, which seismologists give a one-in-three chance of happening in the next 50 years. The coastal community, working with TCF Architecture and Degenkolb Engineers, has designed and built an elementary school gymnasium that can withstand the forces of an earthquake and tsunami, while protecting upwards of 1,000 students and community members.

PLOS Genetics: Distinguishing between Selective Sweeps from Standing Variation and from a De Novo Mutation Abstract An outstanding question in human genetics has been the degree to which adaptation occurs from standing genetic variation or from de novo mutations. Here, we combine several common statistics used to detect selection in an Approximate Bayesian Computation (ABC) framework, with the goal of discriminating between models of selection and providing estimates of the age of selected alleles and the selection coefficients acting on them. We use simulations to assess the power and accuracy of our method and apply it to seven of the strongest sweeps currently known in humans.

Earth - The Cracks Ripping Earth Apart Standing here at Thingvellir, I may be looking at something quite new: the achingly slow birth of a new continent. Sigmundsson tells me that a new "micro plate" is forming beneath our feet. This "special Icelandic plate" is continually expanding as new crust forms on either side of it. *****Tsunami resilience: City of Newport Dedicates the Safe Haven Hill Tsunami Evacuation Assembly Project The City of Newport and other coastal Oregon communities are well aware that the cities they call home are at risk of a significant Cascadia earthquake that would generate a large tsunami. This means that everyone in tsunami inundation zones will need to get to high ground within 15 to 20 minutes. Areas of Newport, particularly the South Beach Peninsula, have a great deal of property within the inundation zones.

Science of 'the Dress': Why We Confuse White & Gold with Blue & Black Remember "The Dress" — the photograph that sparked an online firestorm about whether the garment was white and gold or blue and black? Now, researchers have studied the phenomenon scientifically. It's been well-documented that people can see shapes and colors differently, but "the dress" is perhaps one of the most dramatic examples of a difference in color perception, the researchers said. [Eye Tricks: A Gallery of Visual Illusions] "By studying the pair of colors in 'The Dress,' we can answer the age-old question: Do you see colors the way that I see them?

The Lonely End With one of the fastest aging populations in the world and traditional family structures breaking down, Japan’s kodokushi phenomenon is becoming harder to ignore—not that the government and the Japanese people don’t do their best to sweep it under the carpet. Inaccurate statistics abound, with confusing definitions of what is and isn’t considered kodokushi being created in the process. According to the Ministry of Health, Labour and Welfare, there were some 3,700 “unaccompanied deaths” in Japan in 2013. Cyclone Winston: Village built by Australian man for Fiji's poor survives unscathed Updated Cheap, sturdy houses designed by an Australian man have survived Fiji's devastating cyclone with barely a scratch and provide a potential blueprint for reconstruction efforts. Key points Of the 230 Koroipita houses none sustained significant damagePeter Drysdale uses roofing screws for sturdier constructionVillagers thank Mr Drysdale for giving them safe housesThe houses could be built in five days for $13,000 each, Mr Drysdale says In Koroipita, or Peter's Village, on the north-west coast of Fiji's main island Viti Levu, residents are cleaning up after Cyclone Winston.

*****In pictures: Greenland tsunami aftermath A rare magnitude-four earthquake hit Greenland's west coast on Sunday, producing a surge of water that swept away homes and led to reports of a number of people missing. Joint Arctic Command, the group tasked with the search and rescue mission, has since published images of the aftermath of the disaster and told the BBC that it continues to monitor the situation, warning that further incidents could take place. Image copyright Palle Lauritsen Homes were submerged and washed away after a tsunami hit the village of Nuugaatsiaq, north-western Greenland. Rescuers used liferafts to sweep the area after four people were reported missing.

Steven Weinberg: the 13 best science books for the general reader If you had a chance to ask Aristotle what he thought of the idea of writing about physical science for general readers, he would not have understood what you meant. All of his own writing, on physics and astronomy as well as on politics and aesthetics, was accessible to any educated Greek of his time. This is not evidence so much of Aristotle’s skills as a writer, or of the excellence of Greek education, as it is of the primitive state of Hellenic physical science, which made no effective use of mathematics. It is mathematics above all that presents an obstacle to communication between professional scientists and the general educated public. The development of pure mathematics was already well under way in Aristotle’s day, but its use in science by Plato and the Pythagoreans had been childish, and Aristotle himself had little interest in the use of mathematics in science. It was not long before writers called “commentators” began to try to fill this gap.

Why Did Two Girls Want to Kill for Slender Man? If 12-year-olds Anissa Weier and Morgan Geyser knew that the internet character they worshipped was a fantasy, why did they want to kill their friend for him? Video stills and Morgan’s drawings are part of the court record; mug shots courtesy of the Waukesha Police Department. Payton had been called “Bella” since about the first grade. Lesson Ideas for Teachers Pre & Post Visit Material... We have worked very closely with practicing teachers to develop a range of activities suitable for you to use in the classroom, the school hall or even the playground. All activities aim to help you extend your pupils experience at Dynamic Earth creating something that has a greater longevity, looking at topics from different perspectives or simply increasing the depth of learning back at school.