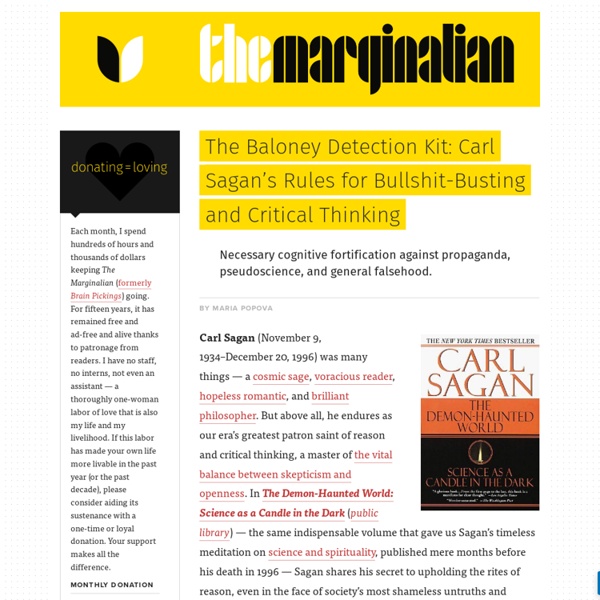 Carl Sagan was many things — a cosmic sage, voracious reader, hopeless romantic, and brilliant philosopher. But above all, he endures as our era’s greatest patron saint of reason and common sense, a master of the vital balance between skepticism and openness. In The Demon-Haunted World: Science as a Candle in the Dark (public library) — the same indispensable volume that gave us Sagan’s timeless meditation on science and spirituality, published mere months before his death in 1996 — Sagan shares his secret to upholding the rites of reason, even in the face of society’s most shameless untruths and outrageous propaganda. Through their training, scientists are equipped with what Sagan calls a “baloney detection kit” — a set of cognitive tools and techniques that fortify the mind against penetration by falsehoods: The kit is brought out as a matter of course whenever new ideas are offered for consideration. Sagan ends the chapter with a necessary disclaimer:

» A Speculative Post on the Idea of Algorithmic Authority Clay Shirky Jack Balkin invited me to be on a panel yesterday at Yale’s Information Society Project conference, Journalism & The New Media Ecology, and I used my remarks to observe that one of the things up for grabs in the current news environment is the nature of authority. In particular, I noted that people trust new classes of aggregators and filters, whether Google or Twitter or Wikipedia (in its ‘breaking news’ mode.) I called this tendency algorithmic authority. I hadn’t used that phrase before yesterday, so it’s not well worked out (and I didn’t coin it — as Jeff Jarvis noted at the time, Google lists a hundred or so previous occurrences.) There’s a lot to be said on the subject, but as a placeholder for a well-worked-out post, I wanted to offer a rough and ready definition here.

Stendhal on the Seven Stages of Romance and Why We Fall Out of Love: Timeless Wisdom from 1822 Love is perhaps the most fertile subject of literature, music, and all the arts. Kurt Vonnegut believed you’re only allowed to be in love three times in your life. It has been described as a matter of bravery, a limbic revision, the greatest insurance against regret. For Peanuts creator Charles Schulz, it is simply, sweetly walking hand in hand. But how, exactly, does love take hold of the heart? In 1822, French writer Marie-Henri Beyle, better-known by his pseudonym Stendhal, penned On Love (public library) — a timeless treatise attempting to rationally analyze the highest human emotion, rediscovered through a passing mention in the diaries of Susan Sontag (who famously and perhaps ironically wrote, “Nothing is mysterious, no human relation.

10 Problems With How We Think by Ross Pomeroy By nature, human beings are illogical and irrational. For most of our existence, survival meant thinking quickly, not methodically. Making a life-saving decision was more important than making a 100% accurate one, so the human brain developed an array of mental shortcuts. Though not as necessary as they once were, these shortcuts -- called cognitive biases or heuristics -- are numerous and innate. Pervasive, they affect almost everything we do, from the choice of what to wear, to judgments of moral character, to how we vote in presidential elections.

LiveLinks - Research Strategies Turnitin, "The Sources in Student Writing – Higher Education (White Paper)": 1.5 Information today – The state of the art 1.5.1 Books Google books, Google eBooks (now Google Play), The Intelligence of Emotions: Philosopher Martha Nussbaum on How Storytelling Rewires Us and Why Befriending Our Neediness Is Essential for Healthy Relationships “The power of ‘the Eye of the Heart,’ which produces insight, is vastly superior to the power of thought, which produces opinions,” the great British economic theorist and philosopher E.F. Schumacher wrote in his 1973 meditation on how we know what we know. He was responding to the Persian poet and philosopher Rumi who, seven centuries earlier, extolled “the eye of the heart” as seventy-fold more seeing than the “sensible eyes” of the intellect. To the intellectually ambitious, this might sound like a squishy notion — or a line best left to The Little Prince. But as contemporary scientists continue to shed light on how our emotions affect our susceptibility to disease, it is becoming increasingly clear that our emotional lives are equipped with a special and non-negligible kind of bodily and cognitive intelligence.

The Just World Theory The Just World Theory By Claire Andre and Manuel Velasquez Afterwards, they said that the 22-year-old woman was bound to attract attention. She was wearing a white lace miniskirt, a green tank top, and no underwear. At knife-point, she was kidnapped from a Fort Lauderdale restaurant parking lot by a Georgia drifter and raped twice. Morningside Center for Teaching Social Responsibility By Alan Shapiro "Warning: Several shipments of bananas from Costa Rica have been infected with necrotizing fasciitis, otherwise known as flesh-eating bacteria. Recently this disease has decimated the monkey population in Costa Rica...and has been able to graft itself to the skin of fruits in the region, most notably the banana....It is advised not to purchase bananas for the next three weeks....

We’re Breaking Up: Rebecca Solnit on How Modern Noncommunication Is Changing Our Experience of Time, Solitude, and Communion Recently, while packing to move, I came upon a stack of letters from my Bulgarian grandmother. During my time in college, we wrote each other long, beautiful letters about once a month. Then she discovered the internet. The letters became emails and, invariably, their nature changed.

Crap Detection 101 - City Brights: Howard Rheingold “Every man should have a built-in automatic crap detector operating inside him.” Ernest Hemingway, 1954 The answer to almost any question is available within seconds, courtesy of the invention that has altered how we discover knowledge – the search engine. Materializing answers from the air turns out to be the easy part – the part a machine can do. The real difficulty kicks in when you click down into your search results. At that point, it’s up to you to sort the accurate bits from the misinfo, disinfo, spam, scams, urban legends, and hoaxes.

Antipositivism Antipositivism (also known as interpretive or negativism) is the belief within social science that the social realm may not be subject to the same methods of investigation as the natural world; the social realm requires a different epistemology in which academics work beyond empiricism and the scientific method. Antipositivists hold that researchers need to be, first, aware that our concepts, ideas, and language shape how we think about the social world. Therefore, antipositivists focus on understanding the interpretative method employed.[1][need quotation to verify] Concept[edit] Beginning with Giambattista Vico in the early eighteenth century, and later with Montesquieu, there was a separation between natural history and human history. The former is not directly under man's control whereas the latter is in fact man's creation.

Ursula K. Le Guin on Aging and What Beauty Really Means “A Dog is, on the whole, what you would call a simple soul,” T.S. Eliot simpered in his beloved 1930s poem “The Ad-dressing of Cats,” proclaiming that “Cats are much like you and me.” Indeed, cats have a long history of being anthropomorphized in dissecting the human condition — but, then again, so do dogs. We’ve always used our feline and canine companions to better understand ourselves, but nowhere have Cat and Dog served a more poignant metaphorical purpose than in the 1992 essay “Dogs, Cats, and Dancers: Thoughts about Beauty” by Ursula K. Le Guin (b.