The global climate models used by the Intergovernmental Panel on Climate Change (IPCC) have not been verified and validated, which requires extensive testing against real world data.

The late Vincent Gray convinced the IPCC that it should not use the term predictions for the results of such models because the models have not been verified and validated. The IPCC changed the terminology from predictions to projections. 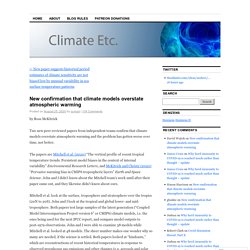 The papers are Mitchell et al. (2020) “The vertical profile of recent tropical temperature trends: Persistent model biases in the context of internal variability” Environmental Research Letters, and McKitrick and Christy (2020) “Pervasive warming bias in CMIP6 tropospheric layers” Earth and Space Science. John and I didn’t know about the Mitchell team’s work until after their paper came out, and they likewise didn’t know about ours. Mitchell et al. look at the surface, troposphere and stratosphere over the tropics (20N to 20S). John and I look at the tropical and global lower- and mid- troposphere. Mitchell et al. 2020. Climate Models Flagged for Running Out of Bounds. Roger Pielke Jr. explains that climate models projections are unreliable because they are based on scenarios no longer bounded by reality. 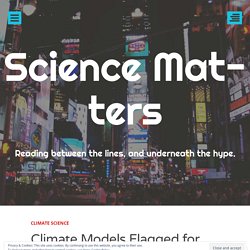 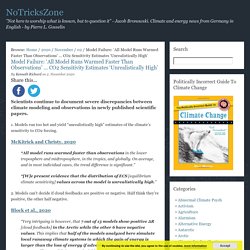 Models run too hot and yield “unrealistically high” estimates of the climate’s sensitivity to CO2 forcing. McKitrick and Christy, 2020 “All model runs warmed faster than observations in the lower troposphere and midtroposphere, in the tropics, and globally. On average, and in most individual cases, the trend difference is significant.” Canada is Warming at Only 1/2 the Rate of Climate Model Simulations – Watts Up With That? Reposted from Dr. 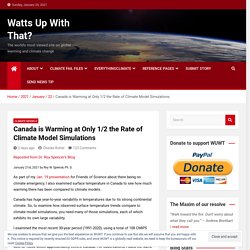 Roy Spencer’s Blog January 21st, 2021 by Roy W. Spencer, Ph. D. As part of my Jan. 19 presentation for Friends of Science about there being no climate emergency, I also examined surface temperature in Canada to see how much warming there has been compared to climate models. Canada has huge year-to-year variability in temperatures due to its strong continental climate. Pat Michaels: “Worse Than We Thought” Guest “it’s tough to make predictions, especially about the future” by David Middleton Climate Predictions “Worse Than We Thought”By Patrick J. 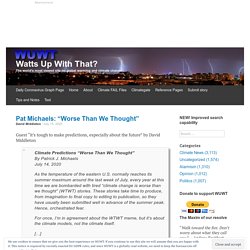 MichaelsJuly 14, 2020As the temperature of the eastern U.S. normally reaches its summer maximum around the last week of July, every year at this time we are bombarded with tired “climate change is worse than we thought” (WTWT) stories. These stories take time to produce, from imagination to final copy to editing to publication, so they have usually been submitted well in advance of the summer peak. Settled Science? New Climate Study Shifts the Goalposts to 2.6-3.9C. Guest essay by Eric Worrall A new climate study has dismissed utterly implausible high end climate models. 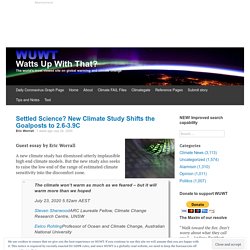 But the new study also seeks to raise the low end of the range of estimated climate sensitivity into the discomfort zone. The climate won’t warm as much as we feared – but it will warm more than we hopedJuly 23, 2020 5.52am AESTSteven SherwoodARC Laureate Fellow, Climate Change Research Centre, UNSWEelco RohlingProfessor of Ocean and Climate Change, Australian National UniversityKatherine MarvelAssociate Research Scientist, NASAWe know the climate changes as greenhouse gas concentrations rise, but the exact amount of expected warming remains uncertain. …A major new assessment has now calculated a range of 2.6–3.9℃. This implies that alarmingly high estimates from some recent climate models are unlikely, but also that comfortingly low estimates from other studies are even less likely. New Paper: Observational Data Point to Less Warming. Abstract Future global warming estimates have been similar across past assessments, but several climate models of the latest Sixth Coupled Model Intercomparison Project (CMIP6) simulate much stronger warming, apparently inconsistent with past assessments. 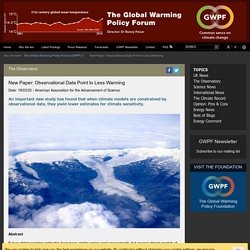 Here, we show that projected future warming is correlated with the simulated warming trend during recent decades across CMIP5 and CMIP6 models, enabling us to constrain future warming based on consistency with the observed warming. These findings carry important policy-relevant implications: The observationally constrained CMIP6 median warming in high emissions and ambitious mitigation scenarios is over 16 and 14% lower by 2050 compared to the raw CMIP6 median, respectively, and over 14 and 8% lower by 2090, relative to 1995–2014. Plausible scenarios for climate change: 2020-2050. By Judith Curry A range of scenarios for global mean surface temperature change between 2020 and 2050, derived using a semi-empirical approach. 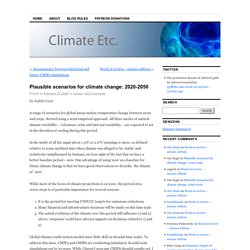 All three modes of natural climate variability – volcanoes, solar and internal variability – are expected to act in the direction of cooling during this period. In the midst of all the angst about 1.5oC or 2.0oC warming or more, as defined relative to some mythical time when climate was alleged to be ‘stable’ and (relatively) uninfluenced by humans, we lose sight of the fact that we have a better baseline period – now. Observed vs Model Predicted Warming Rate in the Arctic. Paper Reviewed Huang, J., Ou, T., Chen, D., Lun, Y. and Zhao, Z. 2019. 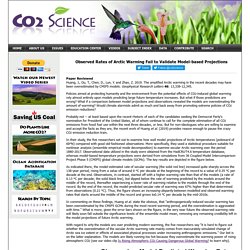 The amplified Arctic warming in the recent decades may have been overestimated by CMIP5 models. Geophysical Research Letters 46: 13,338-12,345. Policies aimed at protecting humanity and the environment from the potential effects of CO2-induced global warming rely almost entirely upon models predicting large future temperature increases. But what if those predictions are wrong? Climate Models: Good, Bad and Ugly. Several posts here discuss INM-CM4, the Good CMIP5 climate model since it alone closely replicates the Hadcrut temperature record, as well as approximating BEST and satellite datasets. 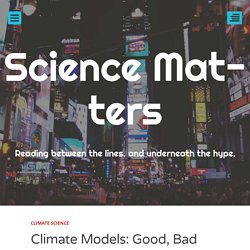 This post is prompted by recent studies comparing various CMIP6 models, the new generation intending to hindcast history through 2014, and forecast to 2100. Background. 30 Years Of IPCC Reports: How Well Have They Done? It is normal practice in science that theoretical predictions which fail experimental tests are rejected or at the very least modified. Not in climate science though. Over the last 30 years there have been 5 IPCC assessment reports on climate change. I decided to compare each warming predictions made at the time of publication to the consequently measured temperatures. The objective is twofold. Firstly how well did the predictions fare with time? The First Assessment Report (FAR) was published in 1990.

Climate Models Have Not Improved in 50 Years. Guest “how can he write this with straight face?” It’s Models All the Way Down. Peer-reviewed pocket-calculator climate model exposes serious errors in complex computer models and reveals that Man’s influence on the climate is negligible. What went wrong? A major peer-reviewed climate physics paper in the first issue (January 2015: vol. 60 no. 1) of the prestigious Science Bulletin (formerly Chinese Science Bulletin), the journal of the Chinese Academy of Sciences and, as the Orient’s equivalent of Science or Nature, one of the world’s top six learned journals of science, exposes elementary but serious errors in the general-circulation models relied on by the UN’s climate panel, the IPCC. The errors were the reason for concern about Man’s effect on climate. Without them, there is no climate crisis. Climate Forecasting: The Big Gap. I was once told by a very eminent climate scientist that he didn’t care what the observations of the real world were, he believed in models, and only models, and they were enough to work out what is going on.

But I wonder? The basics of climate change are well known. Where the debate lies is in the important details — and the peer-reviewed scientific literature is full of such disagreements, frequently about the same sets of data. This is commonly ignored by the more enthusiastic alarmists. Empirical data is one thing, but what is needed for developing policies are predictions.

Again Reality Goes In Opposite Direction Of Climate Models…”Confidence In Models Correspondingly Low” By P Gosselin on 27. March 2019 Yesterday we posted on how rainfall across southern Europe has risen over the past couple of decades, thus going in the opposite direction of what was projected by climate models. And once again the models are shown to be woefully faulty and an unreliable tool for policymaking, as the following example shows. Climate Modellers Waiting for Observations to Catch Up with Their Predictions. Reassessing Model Projections for Hot Days from RCPs – Why climate predictions are so difficult. By Judith Curry An insightful interview with Bjorn Stevens. Frank Bosse provided this Google translation of an interview published in Der Spiegel -Print-Issue 13/2019, p. 99-101. March 22, 2019 Excerpts provided below, with some minor editing of the translation. begin quote: Global warming forecasts are still surprisingly inaccurate.

It’s a simple number, but it will determine the fate of this planet. It indicates how much the average temperature on Earth warms up when the concentration of greenhouse gases in the atmosphere doubles. This result has not changed until today, about 40 years later. NASA: We Can’t Model Clouds, So Climate Models Are 100 Times Less Accurate Than Needed For Projections. Early 20th Century Warming – Polar Amplification, Model-Data & Model-Model Comparisons. Met Office Decadal Forecasts Running Hot. Are climate models overpredicting global warming? IPCC Still Delusional about Carbon Dioxide. On The IPCC’s Undue Confidence In Coupled Ocean-Atmosphere Climate Models – A Summary Of Recent Posts.

Climate Models vs Observations: 2019 Update. Back around 2014 many people, me included, were commenting on the discrepancy between climate models and observations. RCP 8.5. Manufacturing climate nightmares: misusing science to create horrific predictions. Summary: Scientists and journalists bombard us with news about the coming climate catastrophe, described as certain unless we drastically change our economy. This has plunged many into despair. A Sea-Surface Temperature Picture Worth a Few Hundred Words!