Is Vietnam the New China? Why startups are leaving Silicon Valley - Economist. Canals and Trains Made Antebellum Americans Smaller. Psychic Abilities - Russell Targ TED talk. How to Create Your Dream Community For Your Life or Organization. Strange Lakes Are Speeding Up Arctic Permafrost Melt, And That's Really Bad News. Why Fragrances Are the New Secondhand Smoke. Posted on: February 22, 2016 at 3:00 pm Last updated: September 7, 2018 at 3:54 pm. 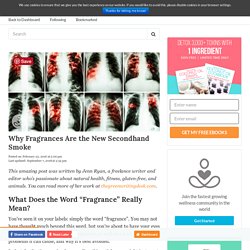 Matter Makes Up Everything, So What Makes Up Matter? (Part 1 of 3) Worms Frozen for 42,000 Years in Siberian Permafrost Wriggle to Life. Did you ever wake up from a long nap feeling a little disoriented, not quite knowing where you were? 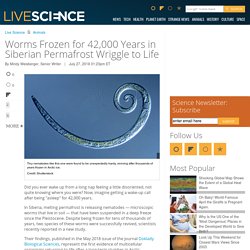 Now, imagine getting a wake-up call after being "asleep" for 42,000 years. In Siberia, melting permafrost is releasing nematodes — microscopic worms that live in soil — that have been suspended in a deep freeze since the Pleistocene. Despite being frozen for tens of thousands of years, two species of these worms were successfully revived, scientists recently reported in a new study. Their findings, published in the May 2018 issue of the journal Doklady Biological Sciences, represent the first evidence of multicellular organisms returning to life after a long-term slumber in Arctic permafrost, the researchers wrote. [Weird Wildlife: The Real Animals of Antarctica] Though nematodes are tiny — typically measuring about 1 millimeter in length — they are known to possess impressive abilities.

This Is The Fastest Rotor Humans Have Ever Built, And It's Bending Our Understanding of Physics. The Practice of Forgiveness. Buddhist psychology offers specific teachings and practices for the development of forgiveness. 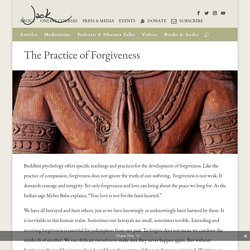 Like the practice of compassion, forgiveness does not ignore the truth of our suffering. Forgiveness is not weak. Building a theater that remakes itself - Joshua Prince-Ramus TED Talk. Ashkenazic Jews' mysterious origins unravelled by scientists thanks to ancient DNA. Where do the Jewish people come from? 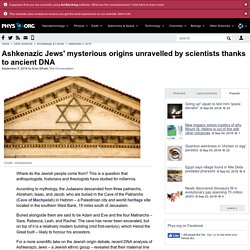 This is a question that anthopologists, historians and theologists have studied for millennia. According to mythology, the Judaeans descended from three patriarchs, Abraham, Isaac, and Jacob, who are buried in the Cave of the Patriarchs (Cave of Machpelah) in Hebron – a Palestinian city and world heritage site located in the southern West Bank, 19 miles south of Jerusalem. Buried alongside them are said to be Adam and Eve and the four Matriarchs – Sara, Rebecca, Leah, and Rachel. The cave has never been excavated, but on top of it is a relatively modern building (mid first-century), which Herod the Great built – likely to honour his ancestors.

For a more scientific take on the Jewish origin debate, recent DNA analysis of Ashkenazic Jews – a Jewish ethnic group – revealed that their maternal line is European. Yuval Noah Harari: the myth of freedom. No PhDs needed: how citizen science is transforming research. Filip Meysman knew he had made his mark on Antwerp when he overheard commuters discussing his research project on the train. 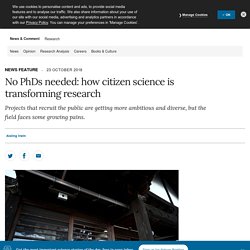 Then, just a few days later, he saw an advertisement about his work on television. There it was, he says, “in between the toothpaste and George Clooney’s Nespresso”. As a biogeochemist at the University of Antwerp in Belgium, Meysman wasn’t used to drawing so much attention. It might take going to another planet for different nations to finally, once and for all, learn how to get along with each other. China’s giant transmission grid could be the key to cutting climate emissions. In early February, Chinese workers began assembling a soaring red-and-white transmission tower on the eastern edge of the nation's Anhui province. 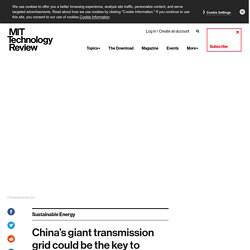 The men straddled metal tubes as they tightened together latticed sections suspended high above the south bank of the Yangtze River. The workers were erecting a critical component of the world’s first 1.1-million volt transmission line, at a time when US companies are struggling to build anything above 500,000 volts. Once the government-owned utility, State Grid of China, completes the project next year, the line will stretch from the Xinjiang region in the northwest to Anhui in the east, connecting power plants deep in the interior of the country to cities near the coast. The transmission line will be capable of delivering the output of 12 large power plants over nearly 2,000 miles (3,200 kilometers), sending 50% more electricity 600 miles further than anything that’s ever been built. 23,000 miles of wires Going global.

FCC Admits Last Year's Hack of Its Comment Section Never Happened – Futurism. This is the best explanation of gerrymandering you will ever see. UN Says Climate Genocide Coming. But It’s Worse Than That. You now have permission to freak out. 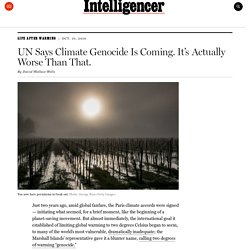 Photo: George Rose/Getty Images Just two years ago, amid global fanfare, the Paris climate accords were signed — initiating what seemed, for a brief moment, like the beginning of a planet-saving movement. But almost immediately, the international goal it established of limiting global warming to two degrees Celsius began to seem, to many of the world’s most vulnerable, dramatically inadequate; the Marshall Islands’ representative gave it a blunter name, calling two degrees of warming “genocide.” 3 point Climate report. The 1,656-page National Climate Assessment can feel overwhelming if not broken up into actionable-sized pieces — not unlike climate change itself. 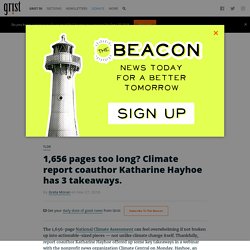 Thankfully, report coauthor Katharine Hayhoe offered up some key takeaways in a webinar with the nonprofit news organization Climate Central on Monday. Hayhoe, an atmospheric scientist and political science professor at Texas Tech University, focused her presentation on a core message: Climate change is impacting everyone now. “The myth that the science isn’t real, or that it’s something up for debate, is not the most dangerous myth that the largest number of people have bought into,” Hayhoe said. “There’s a belief that is just as pernicious: that global warming does not matter to me.” To change this mindset, Hayhoe recommended shifting the narrative away from polar bears in the melting Arctic to how climate change is shaping people’s lives today, from wildfires in California to severe flooding in New York.

Toward a People-Centered Globalization? How We Enslave Ourselves. Meet the Biohackers - BBC News. Falling for Hot Jesus at a Christian Theme Park in Florida. AirBnB Open Homes. Why Shakira loves this African beat. US energy storage storm grows in strength. How exposure to LED lights harms animals as well as humans. RelatedArticlesModule - exposure to led lights A major new report says exposure to LED lights raises the risk of depression, obesity and cancer – and it's not only humans that are affected. 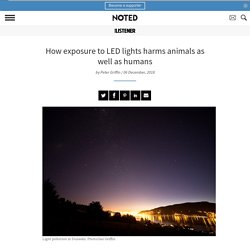 It was 3.30am on a Monday in July 2016 and astronomer Ian Griffin was looking down at Dunedin from the Nasa research plane Sofia. The Boeing 747 was returning to its base at Christchurch Airport after spending the night taking infrared images of distant star formations from 12km above the Southern Ocean. Griffin, director of Otago Museum and the man responsible for installing its planetarium, asked the pilots to fly directly over his hometown. He wanted to see just how much light the sleeping city gave off. The Inventor of the Web Says It’s Broken and Net Neutrality Can Fix It – Futurism. Houses in hurricane strike zones are built back bigger. A study of hurricane-hit areas of the United States has revealed a trend of larger homes being built to replace smaller ones in the years following a storm. 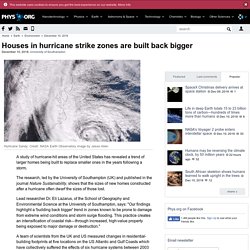 The research, led by the University of Southampton (UK) and published in the journal Nature Sustainability, shows that the sizes of new homes constructed after a hurricane often dwarf the sizes of those lost. Lead researcher Dr. Eli Lazarus, of the School of Geography and Environmental Science at the University of Southampton, says: "Our findings highlight a 'building back bigger' trend in zones known to be prone to damage from extreme wind conditions and storm surge flooding.

This practice creates an intensification of coastal risk—through increased, high-value property being exposed to major damage or destruction. " Recovery - Russell Brand 20 min in. 2 Personality Traits That Indicate High IQ. Altruistic behavior as a costly signal of general intelligence. Amazon Is Everything That's Wrong With America. Arch Nexus SAC is the First Certified Living Building in California. For architectural firms, actions speak louder than words. That’s why Architectural Nexus built its Sacramento office as a manifestation of its values—inspiration, stewardship, and regeneration.

The 8,252-square-foot building, called Arch | Nexus SAC, is one of the most sustainably designed buildings out there, earning LEED Double Platinum certification and the title of the first certified Living Building in California as well as the first Living Certified reuse project in the world. The building was originally a print shop and warehouse, but was reimagined in 2015 to become the firm’s Sacramento office. Renovating an already existing structure instead of building an entirely new one saved massive amounts of waste from going to a landfill, and all of the building material that was not reused on site was collected and recycled.

The building also achieves net-positive energy status by reducing the initial energy footprint as well as generating its own energy. The Earth's poles may be about to flip - and the consequences could be dire. Over the past 200 years, the Earth’s magnetic field has been getting weaker. This Company Wants to Give the Entire World Free WiFi By Launching 272 Satellites in Space - WORLD OF BUZZ. Get the latest viral stories daily! Like us: For the past decade, China has stunned the world with their cutting-edge technology and ambitious plans to change the world, and the latest one has something to do with providing free WiFi services to the entire world. What an exciting time to be alive! This revolutionary plan was unveiled by an internet technology company, LinkSure Network on Tuesday (27 November). According to China Daily, the Shanghai-based company prides itself as a global innovative mobile internet company focusing on free internet access as well as content and location-based services.

The Consolation of Philosophy Quotes by Boethius. “You are the greatest comfort for exhausted spirits. By the weight of your tenets and the delightfulness of your singing you have so refreshed me that I now think myself capable of facing the blows of Fortune. You were talking of cures that were rather sharp. The thought of them no longer makes me shudder; in fact I'm so eager to hear more, I fervently beg you for them.' 'I knew it,' She replied. 'Once you began to hang onto my words in silent attention, I was expecting you to adopt this attitude, or rather, to be more exact, I myself created it in you.

I asked what it was and she told me that it was true happiness. A vision of carbon neutral power around the globe by 2050. A scenario in which no additional oil, coal or nuclear capacity is built and renewables grow at a pace of 3-4%, would see solar comprise 69% of the global electricity system by 2050. “Yellow Vests”: The First Rebellion Against the Ecological Transition. Falling for Hot Jesus at a Christian Theme Park in Florida. The startup resistance is tackling the Trump agenda. Totalitarian Science: Past, Present, and Future? Bizarre Particles Keep Flying Out of Antarctica's Ice, and They Might Shatter Modern Physics. The Four New Personality Types Scientists Just Discovered.

While more research needs to be done, the researchers did find that certain personalities became more or less prevalent as age increased—generally speaking, the more "positive" personality types had a lot more older folks, while younger folks were quite represented among the more "negative" types.