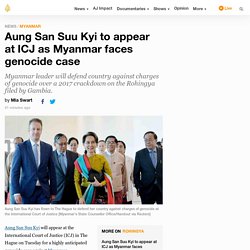 The country's civilian leader, who was awarded the Nobel Peace Prize for her struggle against Myanmar's military dictatorship, arrived at Amsterdam's Schiphol airport on Sunday alongside Wouter Jurgens, the Dutch ambassador to Myanmar, and was greeted by a handful of supporters. More: Rohingya campaigners say won't be 'silenced' by online threats Myanmar sets up special legal unit as Rohingya cases loom A boy who can sing: The life of a Rohingya child refugee. 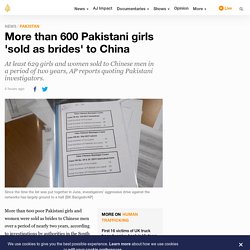 A list of 629 girls and women, obtained by The Associated Press, was compiled by Pakistani investigators determined to break up trafficking networks exploiting the country's poor and vulnerable. The list gives the most concrete figure yet for the number of women caught up in the trafficking schemes since 2018. More: But since the time it was put together in June, the investigators' aggressive drive against the networks has largely ground to a halt. Officials with knowledge of the investigations say this is because of pressure from government officials fearful of hurting Pakistan's lucrative ties to Beijing.

The biggest case against traffickers has fallen apart. 'Immense pressure' The two spoke on condition of anonymity because they feared retribution for speaking out. 'Lucrative trade' Suu Kyi to defend Myanmar against genocide accusation at UN court. The Lebanese revolution must abolish the kafala system. On Tuesday, November 5, the 20th day of the ongoing uprising in Lebanon, an Ethiopian Airlines flight from Beirut arrived at Addis Ababa's Bole International Airport. 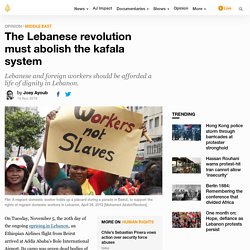 Its cargo was seven dead bodies of Ethiopian domestic workers who had died in Lebanon. According to Ethiopian journalist Zecharia Zelalem, "100s of family members, some from as far as Wolaita were at the airport in what became a mass mourning procession. " Zelalem had previously published a long investigation into efforts by both the Lebanese and Ethiopian authorities to cover up Ethiopian deaths in Lebanon. It is not known how these workers died as no investigation into the circumstances of their deaths was launched.

The story garnered little attention in Lebanon. Cartoons for change. End human rights imperialism now. Backlash: The unintended consequences of western human rights intervention. In 2002, a woman by the name of Amina Lawal was sentenced to be stoned to death in Katsina state in Northern Nigeria. 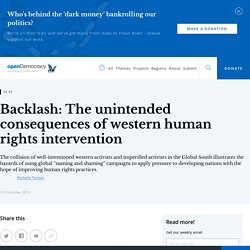 The local Nigerian women’s group BAOBAB for Women’s Human Rights filed an appeal and launched a domestic campaign against the ruling while reaching out to international networks for specific requests. After some high-profile Western women’s rights groups raised the stoning issue internationally, a wave of support for Amina was orchestrated by various groups across the globe, including a flurry of petitions and letter writing campaigns, many of which presented inaccurate information about the case. Some protest letters represented negative stereotypes of Muslims, inflaming anti-Muslim sentiments that were already on the rise following the terrorist attacks on September 11, 2001.

This is not how transnational human rights activism is supposed to go. Boomerang or backlash? But local human rights organizations are being hurt around the world. The case against human rights. In July 2013, Amarildo de Souza, a bricklayer living in a Rio de Janeiro favela, was arrested by police in an operation to round up drug traffickers. 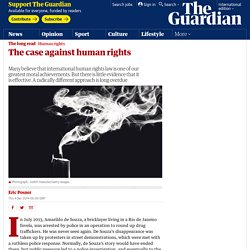 He was never seen again. De Souza’s disappearance was taken up by protesters in street demonstrations, which were met with a ruthless police response. Normally, de Souza’s story would have ended there, but public pressure led to a police investigation, and eventually to the arrest of 10 police officers, who were charged with torturing and murdering him.

What does climate change have to do with human rights? Graffiti on the streets of Johannesburg, South Africa highlight water as a human right. © Victor Sguassero When the Universal Declaration of Human Rights was created in 1948, it was done so to hold firm to the highest of ideals, a set of entitlements that allow all people to live with dignity, freedom, equality, justice, and peace. 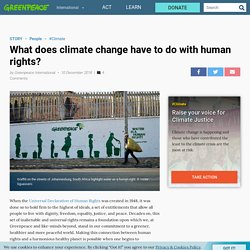 Decades on, this set of inalienable and universal rights remains a foundation upon which we, at Greenpeace and like-minds beyond, stand in our commitment to a greener, healthier and more peaceful world. Making this connection between human rights and a harmonious healthy planet is possible when one begins to understand the impacts of climate change and the ways in which those impacts affect us, our families and communities, and the communities of the future.

Climate change is intensifying wildfires, like this one in Russia © Maria Vasilieva / Greenpeace. Climate Change. Back to What We Do It’s abundantly clear that climate change is already having an impact on human rights. 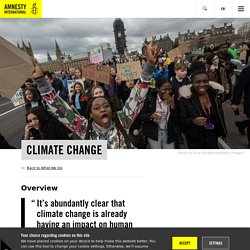 And that this impact will only intensify in coming years. Millions of people are already suffering from the catastrophic effects of extreme disasters exacerbated by climate change – from prolonged drought in sub-Saharan Africa to devastating tropical storms sweeping across Southeast Asia, the Caribbean and the Pacific. ‘Climate apartheid’: UN expert says human rights may not survive.

Climate crisis is greatest ever threat to human rights, UN warns. Climate change is not only having a devastating impact on the environments we live in, but also on respect for human rights globally, the UN has warned. 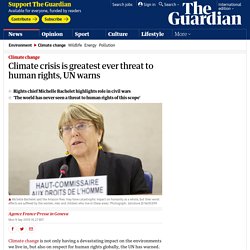 The UN rights chief, Michelle Bachelet, cited the civil wars sparked by a warming planet and the plight of indigenous people in an Amazon ravaged by wildfires and rampant deforestation. She also denounced attacks on environmental activists, particularly in Latin America, and the abuse aimed at high-profile figures such as the teenage campaigner Greta Thunberg. Darfur NowFINAL. The Reckoning: Understanding the International Criminal Court. This collection centers around the feature-length documentary film, The Reckoning: The Battle for the International Criminal Court. 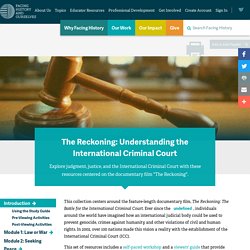 Ever since the , individuals around the world have imagined how an international judicial body could be used to prevent genocide, crimes against humanity, and other violations of civil and human rights.