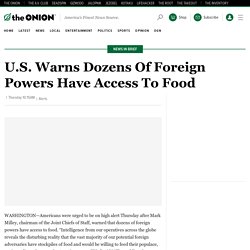 “Intelligence from our operatives across the globe reveals the disturbing reality that the vast majority of our potential foreign adversaries have stockpiles of food and would be willing to feed their populace, posing a direct threat to the American way of life,” said Milley, adding that officials were in possession of satellite photos of farms, grocery stores, and even grain silos in countries hostile to the United States. “We’re talking foreign powers like Cuba, Russia, and Venezuela—not to mention China—which, over the last decade, have accumulated countless stores of meats, rice, and vegetables. 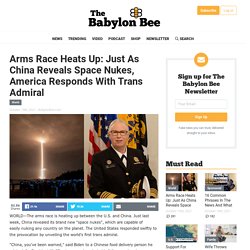 Just last week, China revealed its brand new "space nukes", which are capable of easily nuking any country on the planet. The United States responded swiftly to the provocation by unveiling the world's first trans admiral. "China, you've been warned," said Biden to a Chinese food delivery person he mistook for President Xi. "Our transgender admiral is fully armed and operational. Military experts say that while a space nuke is somewhat impressive, it pales in comparison to the awesome power of diversity. Biden insisted that there is no weapon yet conceived that can top Admiral Levine and that he will gladly accept China's preemptive surrender. Admiral Levine was not available for comment as she was getting her prostate examined. In our latest video, watch as two kids try to choose a Halloween costume that doesn't offend anyone: IRS Reports Your Taxes Specifically Were Spent To Drone-Strike Kids. Border Patrol Ordered To Chase Immigrants With Segways And Pool Noodles. 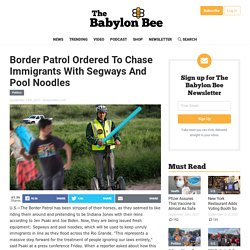 —The Border Patrol has been stripped of their horses, as they seemed to like riding them around and pretending to be Indiana Jones with their reins according to Jen Psaki and Joe Biden. Now, they are being issued fresh equipment: Segways and pool noodles, which will be used to keep unruly immigrants in line as they flood across the Rio Grande.

Harrowing Videos Show Scenes of Pure Chaos at Kabul’s Airport. Photo: Twitter / TOLO News / Nicola Careem Kabul’s airport descended into scenes of deadly chaos on Monday, as thousands of people desperately tried to force their way onto flights out of Afghanistan following the lightning-fast Taliban takeover of the country. 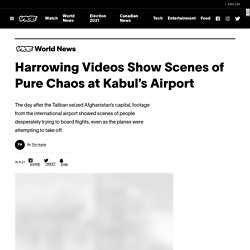 Footage from Hamid Karzai International Airport—only 5km from the centre of Kabul—showed startling scenes of crowds streaming across the tarmac, at one point running alongside and clambering on board a moving U.S. Air Force C-17 transport plane as it prepared to take off. Harrowing footage on social media appeared to show men falling to their deaths from the plane after it took flight. We Trained Khashoggi’s Killers. Crown Prince Bone Saw(File Photo, undated) As good Scissorheads already know, we rarely discuss international politics: it’s not our wheelhouse, we are not qualified, and mostly, I don’t understand the cogs and rubber bands under the hood of US Foreign Policy. 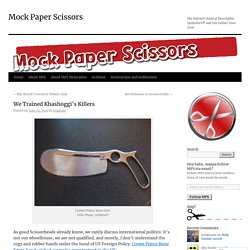 Crown Prince Bone Saw’s hand-picked assassins were trained in the US: China and Russia, by Peter Schweizer. The US may never be good buddies with China or Russia, but it’s helpful to analyze the threats presented by both and to decide which poses the most danger. 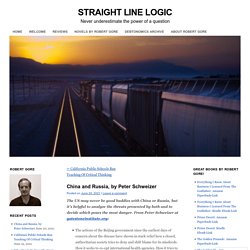 From Peter Schweizer at gatestoneinstitute.org: The actions of the Beijing government since the earliest days of concern about the disease have shown in stark relief how a closed, authoritarian society tries to deny and shift blame for its misdeeds. How it seeks to co-opt international health agencies. How it tries to bribe foreigners to do its bidding. How it has infected more than not just American bodies, but American society and its institutions at many levels.Almost no one in American politics, on the Left or Right, has been hailing the Chinese communist government for its efforts to stem the fourth deadly pathogen to come from its shores and devastate the rest of the world.

America’s Soup-Brained President Says The US Never Interferes In Other Countries’ Elections. Listen to a reading of this article: During an astonishingly sycophantic press conference after the Geneva summit with Vladimir Putin, President Biden posited an entirely hypothetical scenario about what the world would think of the United States if it were interfering in foreign elections and everybody knew it. 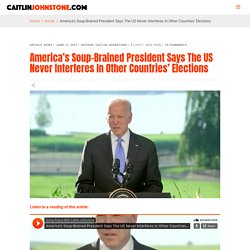 The United States as a Mass-Killing Machine. — from TomDispatch By the time you read this piece, it will already be out of date. 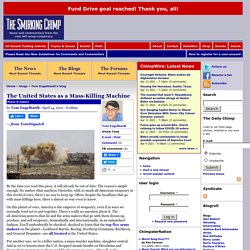 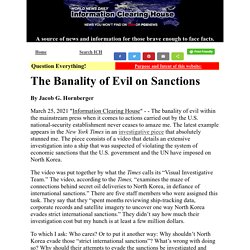 Hornberger March 25, 2021 "Information Clearing House" - - The banality of evil within the mainstream press when it comes to actions carried out by the U.S. national-security establishment never ceases to amaze me. The latest example appears in the New York Times in an investigative piece that absolutely stunned me. How Special Ops Became the Solution to Everything.

Illustrations by Mike McQuade Image above, clockwise from top left: A U.S. 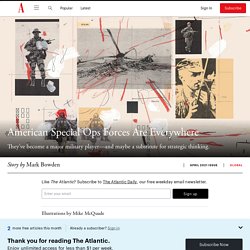 Army Special Forces sniper, 1991; the aftermath of Operation Eagle Claw, the failed U.S. rescue operation in Iran, 1980; a marine during the invasion of Grenada, 1983; Captain Vernon Gillespie Jr. in Vietnam, 1964; soldiers on patrol at Camp Victory, in Somalia, 10 days after 18 Americans were killed during the Delta-led Battle of Mogadishu, 1993.* This article was published online on March 12, 2021. Updated at 7:17 p.m. A Biden Adminstration Makes the Lessons of WWI Newly Relevant.

Kit Knightly (Photo by OLIVIER DOULIERY/AFP via Getty Images) It’s November the 11th again. The poppies are all out, worn by TV personalities (as instructed by their PR department), and politicians who have long forgotten what it was supposed to mean. “Never Again”, that was the intention. But it happened again. An Honest War Is As Rare As An Honest Politician: Notes From The Edge Of The Narrative Matrix.

Once upon a time a particular type of cell cluster evolved the capacity for abstract thought, clawed their way up the food chain, conquered all other life forms on their planet, then spent all their time inventing reasons to be miserable. An honest war is as rare as an honest politician. Our society fixates on Nazi Germany with such masturbatory fascination because it allows us to pretend that horrific mass-scale evil is just something that was inflicted in the past, by someone else, in another part of the world, and not right here and now by our own government.

Despite the disastrous failures of Kissinger’s foreign policy—most notably, he and Nixon expanded the Vietnam War and achieved little in result—his NSC remained the model for future administrations. Even the liberal President Jimmy Carter “affirmed the NSC’s position in the system” by allowing his National Security Advisor, the Columbia political scientist Zbigniew Brzezinski, to design a personalist policy process that attenuated the influence of the State Department, Defense Department, and other elements of the security bureaucracy.

Regardless of whether they were a Republican or a Democrat, Cold War presidents consistently centralized power in their White Houses. Tweet, Twit, Twat. Tiger Beat on the Potomac tells us, alarmingly, that Comrade Stupid’s national security advisor and friend of the United Nations, John Bolton, is now a Tweetering fool, like his boss! Hey, if Hair Füror could over-throw democracy here via the Twatter, so can Bolton, amirite? Yeah, I’m right! I suppose in the long run, dropping verbal bombs is better than actual ones, but when the next war is declared via Twitter, I think maybe @Jack might want to reconsider how his First Amendment Project is working out.

Even his bizarre threat to “totally destroy North Korea” was consistent with his overall style and previous warnings. But how different was his speech, if compared with the first and last UN speeches of President Barack Obama? Untitled. America and the Geopolitics of Upheaval. “THE ESSENCE of a revolution is that it appears to contemporaries as a series of more or less unrelated upheavals,” Henry Kissinger wrote in 1969. The United States of insanity. How America and China Could Stumble to War. US Now Relatively Confident Russia Is Not Trying to Annex Alaska. Here’s What 71 Years of US Presidential ‘Red Lines’ Have Taught Us. Mapping the War Machine. 9 foreign policy issues the Trump administration will have to face - Washington Post. How America became a superpower. The Futility of Air Strikes in the War on Terror. Fellow Americans, Wake Up & Escape The Matrix. Five Questions for Peter Lavelle on “Know-nothing American diplomats” - The Duran. “The scope of our failure”: The real story of our decades-long foreign policy disaster that set the Middle East on fire.

Seymour M. Hersh · Military to Military: US intelligence sharing in the Syrian war · LRB 7 January 2016. US Bombs Israel 'Just To Be Sure' The Pentagon’s Empire of Whining. Artificial Killing Machine – Visualizing U.S. military drone strikes / by @polygonfuture. George W. Bush’s enduring shame: The twisted legal rationales we can’t escape, a dozen years later. What America’s Withdrawal From Afghanistan Really Tells the World About US Hegemony. What It Means When You Kill People On the Other Side of the Planet and No One Notices. 'A Little Bit Plump,' 'Loud' And Other Ways People Spot Americans Abroad. The Vocabulary of War Criminals. 9 depressing predictions for the future of America. The Pentagon’s ‘Long War’ America’s immoral exceptionalism: The lie we keep telling ourselves about foreign policy and democracy. The Permanent Paranoia of Empire. U.S. Allows Sales Of Armed Drones To Allies With Clean Human Rights Records.

Key Factors Enabling the American Government to Commit Horrific Acts Abroad. Why is there such an explosion of violence across the Middle East? Here's an alternative view... Half-Finished War Memorial For Iraq And Afghanistan Announced. North America is a crime scene: The untold history of America this Columbus Day. Bring Back Adolf: Needed, A New Furor About Der Führer. Obama's true foreign policy dilemma is not what Tom Donnelly thinks it is. Army War College Welcomes Foreign Exchange Class Of Future Brutal Dictators. Not Forgotten: Street Art to Remember the Victims of the School of the Americas. Why War is Inevitable. Tyranny’s Toolkit. The Strangelove Effect. The Asia Pivot: Old Policy, New Name - Geopolitical Monitor.

The Six Primary Reasons for Why They Hate Us. Empire of the Senseless. Madness. The Moralization of American Exceptionalism. Avoiding the US's next grand delusion - Opinion. Avoiding the U.S.'s Next Grand Delusion. RT On The U.S. and Its Chemical Weapons Story. Experts Point To Long, Glorious History Of Successful U.S. Bombing Campaigns. Chomsky: The U.S. behaves nothing like a democracy.

Yemeni Reporter Who Exposed U.S. Drone Strike Freed from Prison After Being Jailed at Obama’s Request. Crooks and Liars. The Threat of Nuclear War, North Korea or the United States? Who Are We at War With? That’s Classified. The Emperor Strikes Back. Noam Chomsky: Obama Is ‘Running Biggest Terrorist Operation That Exists’ Secrecy News - from the FAS Project on Government Secrecy.