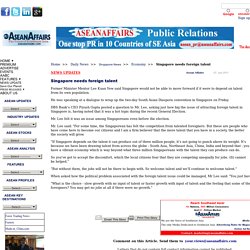 He was speaking at a dialogue to wrap up the two-day South Asian Diaspora convention in Singapore on Friday. DBS Bank's CEO Piyush Gupta posted a question to Mr. Lee, asking just how big the issue of attracting foreign talent in Singapore is, having noted that it was a hot topic during the recent General Election. Mr. Mr. "If Singapore depends on the talent it can produce out of three million people, it's not going to punch above its weight. So you've got to accept the discomfort, which the local citizens fear that they are competing unequally for jobs. "But without them, the jobs will not be there to begin with. When asked how the political problem associated with the foreign talent issue could be managed, Mr Lee said: "You just have to assuage it. Lee Kuan Yew's foreign talent policy destroys Singapore. - SgForums.com.

Ladies and Gentlemen, The Straits Times, Singapore's state controlled newspaper printed in it's online edition the story "Why we need immigrants". 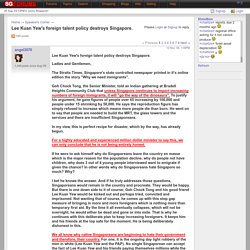 Goh Chock Tong, the Senior Minister, told an Indian gathering at Bradell Heights Community Club that unless Singapore continues to import increasing numbers of foreign immigrants, it will "go the way of the dinosaurs". To justify his argument, he gave figures of people over 65 increasing by 100,000 and people under 15 shrinking by 50,000. He says the reproduction figure has simply refused to increase which means more people die than born. He went on to say that people are needed to build the MRT, the glass towers and the services and there are insufficient Singaporeans. In my view, this is perfect recipe for disaster, which by the way, has already begun. For a highly educated and experienced million dollar minister to say this, we can only conclude that he is not being entirely honest. I bet he knows the answer. Your letters are welcome. Singapore:Resentment towards foreigners growing. Resentment towards foreigners growing Inter Press Service. 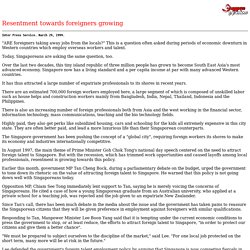 March 29, 1999. "ARE foreigners taking away jobs from the locals? " This is a question often asked during periods of economic downturn in Western countries which employ overseas workers and talent. Today, Singaporeans are asking the same question, too. Over the last two decades, this tiny island republic of three million people has grown to become South East Asia's most advanced economy.

It has thus attracted a large number of expatriate professionals to its shores in recent years. There are an estimated 700,000 foreign workers employed here, a large segment of which is composed of unskilled labor such as house helps and construction workers mainly from Bangladesh, India, Nepal, Thailand, Indonesia and the Philippines. There is also an increasing number of foreign professionals both from Asia and the west working in the financial sector, information technology, mass communications, teaching and the bio technology fields.

Foreigntalents.wikispaces. Foreign talents are seen as a threat to Singapore workforce.Discuss. Foreigntalent35 - Social Impact of Foreign Talent. Skip to main content Get your Wikispaces Classroom now: the easiest way to manage your class. guest Join | Help | Sign In. 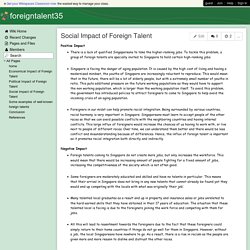 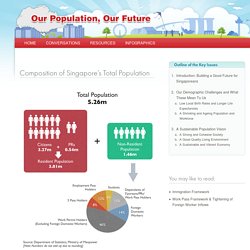 Together, they made up the resident population of 3.81 million. We also had a non-resident population of 1.46 million who are working, studying or living in Singapore on a non-permanent basis. Singapore’s total population was 5.26 million. Immigrants Immigrants are individuals who are granted PR or SC and are counted as part of our resident population. Each PR and SC application is evaluated holistically on a set of criteria which includes the individual’s family ties to Singaporeans, economic contributions, qualifications, age and family profile to assess the applicant’s ability to contribute to Singapore and integrate into society, and his/her commitment to sinking roots.

From 2007-2011, 38% of new SCs were granted to working individuals, while 62% were dependants. S’pore universities’ foreign talent policies need to change. Much recent discussion has focused on the declining percentage of Singaporean faculty in the university system. 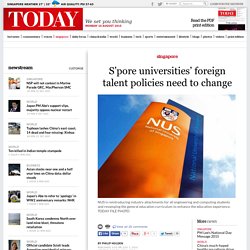 During the Budget debate in March, Member of Parliament Seah Kian Peng commented on the low percentage of Sing­aporeans in several departments at the National University of Singapore (NUS) and Nanyang Technological University (NTU). His remarks returned to a concern raised in previous years by other politicians and generated further responses from academics and university administrators. The issue is a real one: While more than half of current tenured faculty in the university system are Singaporean, Singaporeans now constitute only a quarter of early-career academics on the tenure track at NUS and NTU. My experience as a visiting scholar in Canada over the past two years suggests that discussions may not be enough and should be supplemented by concrete policy changes. 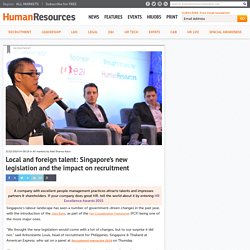 If your company does great HR, tell the world about it by entering HR Excellence Awards 2015 Singapore’s labour landscape has seen a number of government-driven changes in the past year, with the introduction of the Jobs Bank, as part of the Fair Consideration Framework (FCF) being one of the more major ones. “We thought the new legislation would come with a lot of changes, but to our surprise it did not,” said Antoninette Louis, head of recruitment for Philippines, Singapore & Thailand at American Express, who sat on a panel at Recruitment Interactive 2014 on Thursday. “The changes were more on the administrative side, in terms of things like audit processes; and not from a strategy perspective.”

The introduction of the FCF therefore hasn’t had a huge change on how they recruit, as discrimination hasn’t been an issue.. Impact of the Jobs Bank.