The USA in WW2

There are the two points you have to work on. Divide the task, the sources give you various information but you don't need to read all of them.

America at war intro. WWII In HD: America Enters World War II. America at war worksheet. The USA in WW2 Conclusion. Why did the Japanese Attack Pearl Harbor? Everything You Should Know About the Attack on Pearl Harbor in 120 Seconds. Pearl Harbor, 1941 (World War II ) 'A Date Which Will Live in Infamy' Background Early in the afternoon of December 7, 1941, President Franklin D. 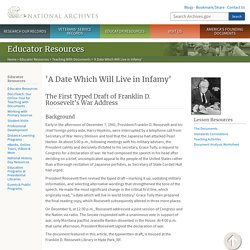 Roosevelt and his chief foreign policy aide, Harry Hopkins, were interrupted by a telephone call from Secretary of War Henry Stimson and told that the Japanese had attacked Pearl Harbor. At about 5:00 p.m., following meetings with his military advisers, the President calmly and decisively dictated to his secretary, Grace Tully, a request to Congress for a declaration of war. He had composed the speech in his head after deciding on a brief, uncomplicated appeal to the people of the United States rather than a thorough recitation of Japanese perfidies, as Secretary of State Cordell Hull had urged. President Roosevelt then revised the typed draft—marking it up, updating military information, and selecting alternative wordings that strengthened the tone of the speech. 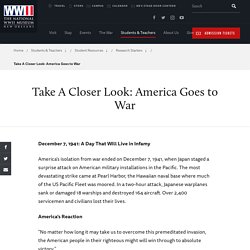 The first was landing craft, constructed of wood and steel and used to transport fully armed troops, light tanks, field artillery, and other mechanized equipment and supplies to shore. These boats helped make the amphibious landings of World War II possible. Higgins also designed and manufactured supply vessels and specialized patrol craft, including high-speed PT boats, antisubmarine boats, and dispatch boats. LCVP (Landing Craft, Vehicle, Personnel) The LCVP was the most famous landing craft designed and produced by Higgins Industries. It could land soldiers, and even jeeps, on a beach. 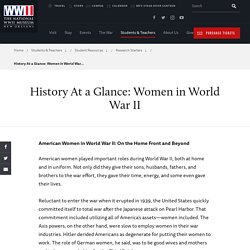 The Atomic Bomb (with Captions) Hiroshima: Dropping The Bomb - Hiroshima - BBC. Atomic bombing of Nagasaki - BBC. Raising the flag on Iwo Jima: Here's the story behind that iconic World War II photo. On Feb. 23, 1945, during the Battle of Iwo Jima (Feb. 19 to March 26), six Marines planted the U.S. flag at the summit of Mount Suribachi.

The scene was photographed by journalist Joe Rosenthal of the Associated Press and his image soon became famous around the world. What many people do not know is that this iconic photo actually shows the second flag to be raised on Iwo Jima that day. Who raised the first flag on Iwo Jima? Located on the southern tip of the Japanese island, Mount Suribachi is a dormant volcano that is 546 feet (166 meters) high. The summit has a dominating view of the rest of Iwo Jima, including its black sand beaches. Related: Wreck of British WWII sub discovered off Malta A 40-man combat patrol, led by 1st Lt. The flag from the USS Missoula was raised by Schrier and two other Marines at around 10:30 a.m. local time. "The best memory I've got is the day that we gave a flag off our ship to a lieutenant.