SkyJack: The drone that hijacks other drones in mid-air. Amazon's Prime Air announcement last week brought concerns about the use of commercial drones to the fore, but one programmer may have just muddied the waters even more. 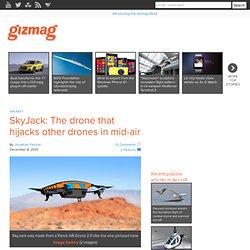 Notable hacker Samy Kamkar recently modified a Parrot AR.Drone 2 with his custom software, called SkyJack, allowing it to seek out the wireless signals of other UAVs and take control of them, even while in flight. If his name sounds familiar, that's because Kamkar is the same hacker-turned-legit security researcher that released a worm that took down MySpace back in 2005 and later went on to expose security weaknesses in several major credit cards. For his latest project, Kamkar rigged a Parrot AR.Drone 2.0 with a Raspberry Pi, a USB battery, and two wireless adapters, before uploading his custom programming. The SkyJack software is designed for Linux devices and runs a few supporting programs in sequence to effectively hijack any drones in the area.

LAPD goes to Israel, falls in love with drones and mass surveillance. Www.electronicintifada.net The HoverMast-100, an Israeli surveillance drone that the LAPD hopes to add to its arsenal. 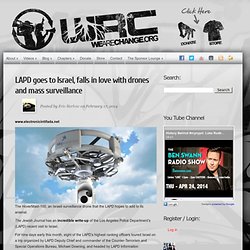 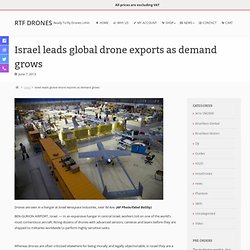 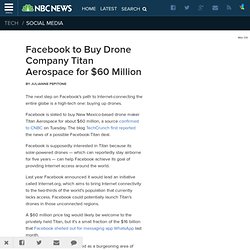 What FACEBOOK and GOOGLE are Hiding from world. TED Talk. Apple Rejects App That Tracks U.S. Drone Strikes. It seemed like a simple enough idea for an iPhone app: Send users a pop-up notice whenever a flying robots kills someone in one of America’s many undeclared wars. 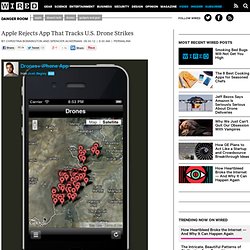 But Apple keeps blocking the Drones+ program from its App Store — and therefore, from iPhones everywhere. The Cupertino company says the content is “objectionable and crude,” according to Apple’s latest rejection letter. It’s the third time in a month that Apple has turned Drones+ away, says Josh Begley, the program’s New York-based developer.

The company’s reasons for keeping the program out of the App Store keep shifting. Secrecy News. The Director of National Intelligence has forbidden most intelligence community employees from discussing “intelligence-related information” with a reporter unless they have specific authorization to do so, according to an Intelligence Community Directive that was issued last month. 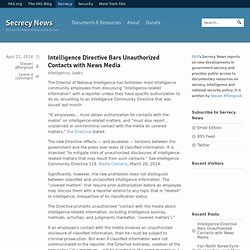 “IC employees… must obtain authorization for contacts with the media” on intelligence-related matters, and “must also report… unplanned or unintentional contact with the media on covered matters,” the Directive stated. The new Directive reflects — and escalates — tensions between the government and the press over leaks of classified information. It is intended “to mitigate risks of unauthorized disclosures of intelligence-related matters that may result from such contacts.” See Intelligence Community Directive 119, Media Contacts, March 20, 2014. Like a Swarm of Lethal Bugs: The Most Terrifying Drone Video Yet - Conor Friedersdorf.

An Air Force simulation says researchers are at work on killer robots so tiny that a group of them could blend into a cityscape. 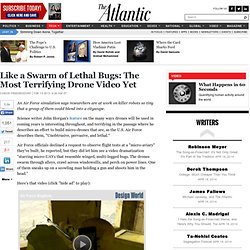 Science writer John Horgan's feature on the many ways drones will be used in coming years is interesting throughout, and terrifying in the passage where he describes an effort to build micro-drones that are, as the U.S. Air Force describes them, "Unobtrusive, pervasive, and lethal. " The Drone War Doctrine We Still Know Nothing About. 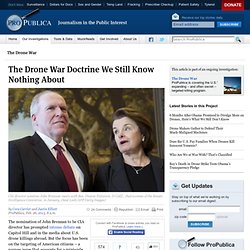 Dianne Feinstein, D-Calif., chairwoman of the Senate Intelligence Committee, in January. (Saul Loeb/AFP/Getty Images) The focus on American citizens overshadows a far more common, and less understood, type of strike: those that do not target American citizens, Al Qaeda leaders, or, in fact, any other specific individual. How Does the U.S. Mark Unidentified Men in Pakistan and Yemen as Drone Targets? What little we know about the evidence needed to justify a drone strike on unidentified people. 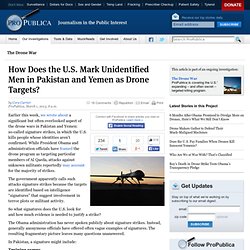 Earlier this week, we wrote about [1] a significant but often overlooked aspect of the drone wars in Pakistan and Yemen: so-called signature strikes, in which the U.S. kills people whose identities aren’t confirmed. While President Obama and administration officials have framed [2] the drone program as targeting particular members of Al Qaeda, attacks against unknown militants reportedly may account [3] for the majority of strikes. The government apparently calls such attacks signature strikes because the targets are identified based on intelligence “signatures” that suggest involvement in terror plots or militant activity. 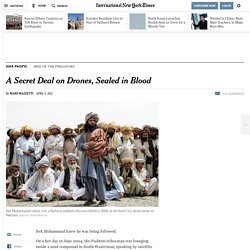 US to Drone Victims: Shut Up. A Drone Warrior’s Torment: Ex-Air Force Pilot Brandon Bryant on His Trauma from Remote Killing. This is a rush transcript. Copy may not be in its final form. JUAN GONZÁLEZ: We turn now to look at how the United States uses drones, and their impact—this time through the eyes of one of the first U.S. drone pilots to speak out. Former Air Force pilot Brandon Bryant served as a sensor operator for the U.S. Air Force Predator program from 2007 to 2011. He manned the camera on the unmanned aerial vehicles, commonly known as drones.